As ‘Saturday Night Live’ Turns 45, Watch the Original Cast Members Discuss the Show In a 1975 Interview 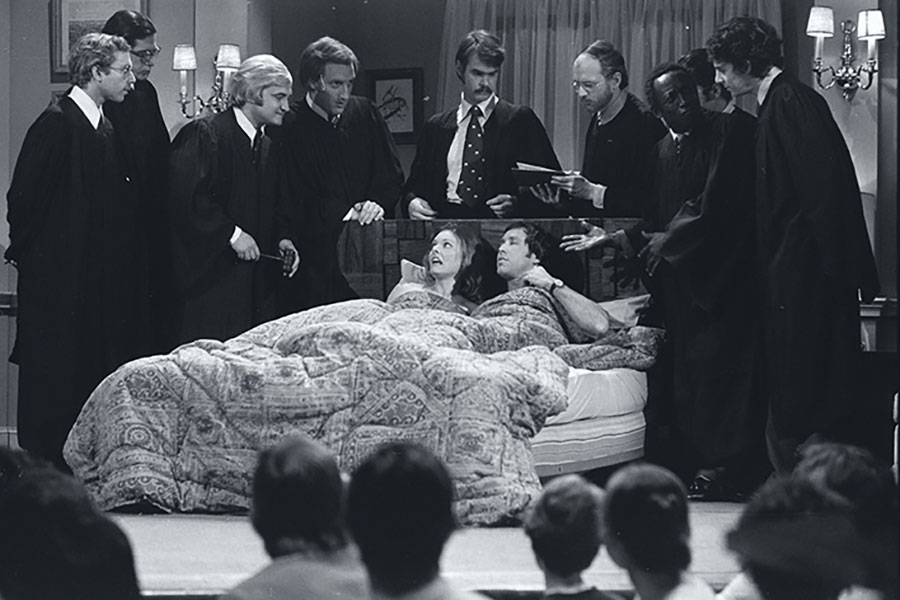 Original cast members John Belushi, Dan Aykroyd, Jane Curtain and Chevy Chase in a 'Saturday Night Live' sketch about a couple who has the Supreme Court watching over them in bed. Photo: Owen Franken/Corbis via Getty Images

There’s a small irony in the fact that Saturday Night Live’s 45th anniversary falls on a Sunday (Oct. 11), but four-and-a-half decades on it’s difficult to imagine a time when the sketch show wasn’t a staple of the weekend.

In fact, in 1975 the show came to be as a way to fill a Saturday night gap caused by NBC pulling The Weekend Tonight Show — reruns of Johnny Carson’s Tonight Show that the host requested be run during the week instead, so he could take a few weeknights off.

And so NBC pegged Canadian producer Lorne Michaels to pull together a replacement — a comedy and music variety show with a revolving set of guest hosts called NBC’s Saturday Night (for the first season only due to the fact that rival ABC network already had a variety show called Saturday Night Live with Howard Cosell).

Ahead of the show’s debut episode — which was hosted by George Carlin — the cast (minus Coe and O’Donoghue) appeared alongside Lorne Michaels on Tom Snyder’s Tomorrow Show to discuss the new series. You can watch the clip below.

The interview kicks off with Snyder poking fun at Chevy Chase’s name before Michaels introduces the cast. Laraine Newman, in particular, feigns being annoyed when her boss pretends to forget her name.

Snyder makes a few cracks to try and fit in with the comedians as the interview goes along, and when asked what viewers should look for in the first episode Michaels quips “Anxiety, fear.”

Knowing the entertainment mogul that Michaels became — not to mention the future legends he’s sitting next to — it’s strange to see them all so reserved and anxious about the show they’re about to debut. Of course, they didn’t realize they’d be kicking off a tradition that, 45 years later, is still going strong.

Dan Aykroyd: From Blues to Booze