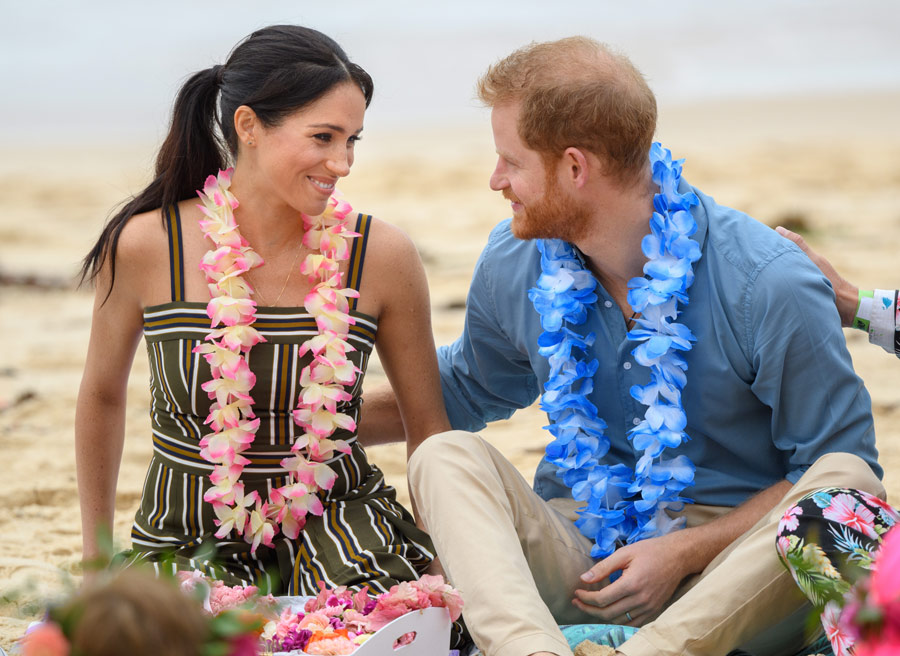 Prince Harry and the Duchess of Sussex had barely touched down in Australia to kick off their 16-day Royal Tour when Kensington Palace broke the news that the newlyweds are expecting their first child in the spring.

For royal watchers turned #bumpwatchers, the timing couldn’t have been better. Harry and Meghan’s jam-packed tour of Australia, New Zealand, Tonga and Fiji promised dozens upon dozens of photo ops, including more than 35 official engagements in Australia alone — not to mention the 2018 Invictus Games, Harry’s international sporting event for injured war veterans.

Naturally, Meghan looked impossibly radiant — it must be that pregnancy glow! — despite having spent 90 per cent of the entire trip in stilettos. (She makes it look so easy!)

Although members of the Royal Family embark on countless official public engagements annually, rarely are any of them as obsessively chronicled as the events attended by Harry and Meghan. They’re a breath of fresh air, casting off some of The Firm’s stuffier notions of tradition and etiquette.

We’ve rounded up some of our favourite Harry and Meghan moments from their two-week Australasia tour.

Lets start by acknowledging that the first official day of the tour contained a wealth of memorable highlights. For starters, it marked the first time Meghan stepped out in public since the pregnancy announcement — and what a reveal it was! Wearing a cream dress from Australian designer Karen Gee, Meghan debuted her baby bump on the steps of the Sydney Opera House.

Meghan later received some adorable gifts for Baby Sussex! Australian Governor-General Peter Cosgrove and his wife, Lady Lynne Cosgrove, presented the couple with a fluffy stuffed kangaroo (complete with joey in pouch) and fleece Ugg booties, during an event.

This just might be our favourite moment from the entire tour: Harry introduced Meghan to his biggest Australian supporter — 98-year-old war widow Daphne Dunne. She’d  previously met the prince twice — first in 2015, when she planted a kiss on his cheek, and again in 2017. This time around, the royal spotted Dunne sitting in her wheelchair in the crowd outside the Sydney Opera House and greeted her with a big hug. He then introduced Dunne — who wore her late husband’s military medals — to Meghan. As the three chatted, Dunne gently held both of Meghan’s hands.

Less than 24 hours after Harry and Meghan’s charming run-in with war widow Daphne Dunne, little Luke Vincent had his own viral royal moment. As the couple greeted children from local public schools in Dubbo, five-year-old Luke embraced Harry and Meghan — hanging onto Harry for just a bit longer than Meghan so he could touch the duke’s red beard. The Sussex’s got down on the ground to chat with Luke, who has Down’s syndrome, while the world let out a collective “awww.”

The duke and duchess let loose by going barefoot on Bondi Beach where they met with fans and spoke with the founders of local community surfing group OneWave, whose focus is to raise awareness of mental health. You’d be hard-pressed to find a public moment where the couple seemed more relaxed and at ease — not to mention, in love — than this one.

Meghan hit a Royal Tour milestone as she gave her first official speech of the tour. The duchess looked poised and confident as she took to the lecture theatre podium at the University of the South Pacific. She talked about how her own college education was possible thanks to “scholarships, financial aid programs and earnings from a job on campus [but] … it was worth every effort.” Meghan went on to champion the importance of access to education for women, which was met with hearty applause.

Meghan brought her fashion A game to the Australian Geographic Society Awards, dazzling fans in what is arguably one of her best looks to date: a white tulle Oscar de la Renta dress with a bird embellishment. It was a showstopper!

Remember last year, during the Invictus Games in Toronto, when Harry and Meghan made their official public debut as a couple — complete with the former actress’ ripped jeans? Well, we’ve come a long way since then, as evidenced by the duchess’ speech during the closing ceremony of the Invictus Games in Sydney. Oh, what a difference one year can make, eh?

Upon their arrival in New Zealand, Meghan and Harry wasted little time in immersing themselves in the local culture. The parents-to-be attended a traditional welcome ceremony on the lawns of Government House, residence of Governor General of New Zealand, Dame Patsy Reddy. The pair were even invited to perform the hongi, a traditional Māori greeting which includes two people pressing their nose and foreheads together.