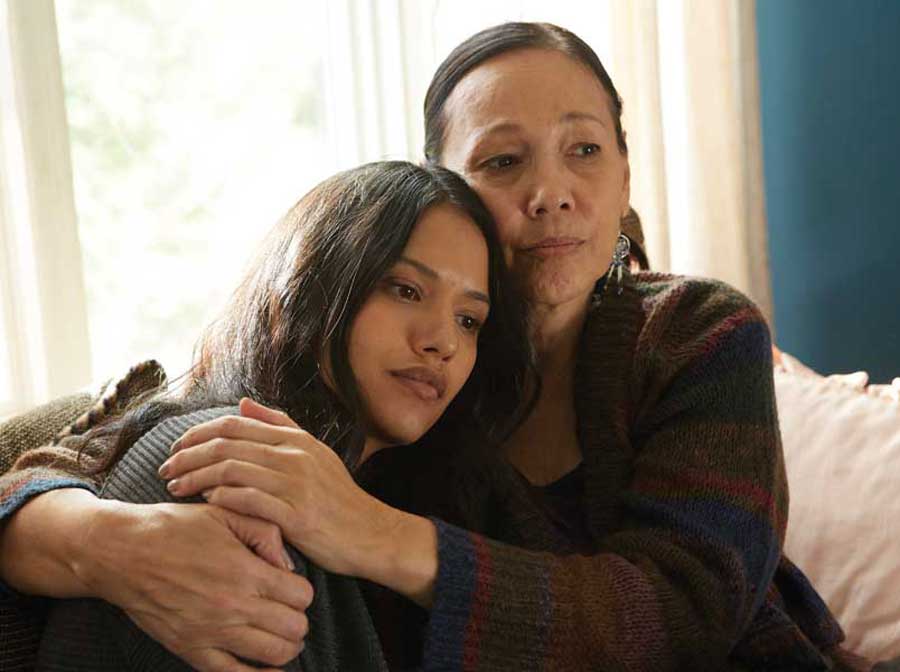 Don McKellar relishes “opportunities to throw myself off balance from outside sources.” The 55-year-old Canadian actor and filmmaker told me so himself a few years back, so when he arrived at the Zoomerplex in downtown Toronto to discuss his latest film, an adaptation of Joseph Boyden’s Giller Prize-winning novel Through Black Spruce, I asked if that sentiment about off balance opportunities still applies. He leaned forward in his chair and let out a laugh. “Yes. Yes, that’s right,” he admits. “This is one of them.”

Through Black Spruce — about a young Cree woman from James Bay (played by Tanaya Beatty) searching for her twin sister who went missing after moving to Toronto to become a model — is in many ways a study in contrasts. The tranquillity of the Moosonee, Ont., wilderness, where the film was partially shot, clashes with the social and political struggles faced by its Indigenous communities, while the bright lights of Toronto’s glamorous fashion scene fade to under-the-turnpike bonfires, where struggling Indigenous people huddle for warmth.

“In the last 50-plus years, particularly in the North, we’ve had to endure so many hardships that have really torn apart our livelihood and our family structures, our community structures, our authority,” says Tina Keeper, Cree actress, producer and former member of Canada’s Parliament who optioned Boyden’s novel in 2012 and produced and appeared in the film. “Yet, somehow, we find a way to still care for each other and ourselves. I think that’s really what the movie was about for me.”

Another, more contentious contrast — the desire for more Indigenous stories running up against the debate about cultural appropriation — looms over both the novel and the film. A 2016 investigation by the Aboriginal Peoples Television Network raised questions about Joseph Boyden’s Indigenous roots while others wonder if McKellar, a white man, should direct this distinctly Indigenous story.

“On one hand, yes, I felt that I was an outsider, and in some ways that can be a good perspective, especially for movies,” McKellar explains. “On the other hand, I felt very connected. I felt very connected right away to Tina. And she’d invested so long in the book. I felt very, very close to the characters without a lot of effort … I was at a point in my life where I just didn’t want to tell my own story again.”

McKellar completely supports, “Indigenous people who feel like … they want to tell their own stories and they want to see more filmmakers from their communities,” but adds, “Your genetic heritage isn’t the only factor in why you should make a movie. Sometimes it is the key factor, but other times it isn’t … I thought if I could help Tina tell her story, it was a challenge I shouldn’t turn down.”

He also says he spoke with many of the Indigenous cast and crew about these issues and that they all wanted to proceed with the film.

“I think that there’s a popular delusion that directors are the only ones that make a movie. Anyone who makes movies knows that isn’t true … People just have to meet the people that I worked with on the film. They’re strong voices [and] the idea that I was sort of a puppet master, I find so amusing.”

“I’m finding that a lot of the discussion is patronizing, rather than empowering,” Keeper, 56, adds. Rather than this “silent doll that’s just in the corner,” she “really felt that I was part of a team that was truly collaborative. I think that my aim has always been toward Indigenous film sovereignty and I think that that’s something we can do together as Canadians and Indigenous people.”

Along with Keeper and other members of the cast, whose Indigenous performers include Beatty, Tantoo Cardinal, Brandon Oakes, Roseanne Supernault, Edmund Metatawabin and former Oscar-nominee Graham Greene, Canadian Indigenous fingerprints can be found on almost every facet of the production. This includes the film’s cultural and language advisers, artwork by Ojibwa/Cree artist KC Adams, clothes by Cree designer Lesley Hampton and the many members of the communities in which they filmed who offered help, services and prayers.

“This whole film,” Keeper says, “was a process of collaboration,” adding the importance of taking a place in terms of the Canadian cultural landscape “so that we’re not seen outside of it, and we’re not seen as outsiders. That, really, we start to create a space inside of how people see Indigenous Canadians, how we see our partnership.”

Through Black Spruce comes at a time when Indigenous representation on screen is finally breaking through. The film premiered as one of a number of movies about Indigenous or First Nations communities at the 2018 Toronto International Film Festival, including Edge of the Knife – a 19th-century drama that is the first ever full-length film made in the UNESCO-classified endangered Indigenous language of Haida. Falls Around Her, meanwhile, about the struggles of a First Nations singer-songwriter, features Tantoo Cardinal, 68, in her first big-screen starring role — a telling fact in itself. She also won the Toronto Film Critics Association’s 2018 Technicolor Clyde Gilmour Award for her contributions to Canadian cinema. Then, in January 2019, Edmonton-born Cree filmmaker Alexandra Lazarowich won the Short Film Special Jury Award for Directing at the Sundance Film Festival for her film Fast Horse, about the First Nations sport of Indian Relay. And across North America the movement toward better representation received another major boost when Yalitza Aparicio, 25, who boasts a Mixtec and Triqui background, became the first Indigenous woman ever to be nominated for a Best Actress Oscar — in her first acting role, no less — for her part in Alfonso Cuarón’s Roma, a Mexican film that’s tipped by critics to take home a haul of hardware at the Academy Awards. A far cry from playing secondary roles to “white saviours” in popular films like Dances With Wolves, the Indigenous creative community is now in a position to take command of their cultural histories and tell their own stories on their own terms.

“We’ve come to the times when we have every skill that we need to make the films — we have the people, they have the expertise,” Cardinal, who was invited to join the Academy of Motion Picture Arts and Sciences, which produces the Oscars, in 2018 to help increase cultural diversity, told me. “When I first started out, we didn’t have those elements, and it’s taken a long time. The fact that we have movies in TIFF is an indication that there is change.”

Keeper agrees, noting, “it’s really important for this country now, too, to prioritize our story-making in the language.”

For McKellar, the partnership with Keeper and the communities they worked with also yielded new perspectives.

“I think the main feeling I came away with is the warmth and the supportive nature of those people who we met up there and who worked with us … a feeling of the people and what keeps them going.”

Both McKellar and Keeper hosted screenings for the community in Moosonee, including one attended by Joseph Boyden who, McKellar says, is, “really happy with the film and … the fact that [the community] embraced the film kind of affirmed his feeling that he had told those stories well.”

Keeper also notes they’ve kept a dialogue open with coalitions representing families of the missing and murdered Indigenous women and girls in Canada to arrange private screenings and open dialogues around the issue.

The film, McKellar says, “deals with a whole bunch of issues — sort of the legacy of residential schools and missing and murdered women. But it really is about surviving that and coming together as a family and finding an identity, finding your home.” As for what viewers take from the film, McKellar hopes they recognize the talent of the performers, as well as, “a possibility of moving forward, and that maybe there is a tiny hope for reconciliation that can seem such a distant dream at times. That’s what I hope.”