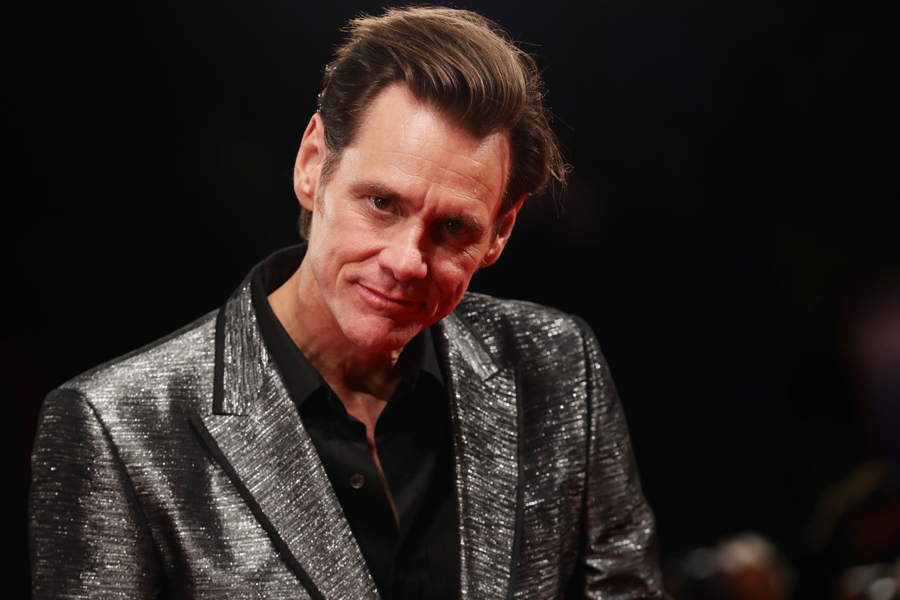 So you want to start a Twitter feud. Wonderful. After all, people love it when random folks lose their mind on social media and start attacking a complete stranger over something they’ve posted. And yet, as biting as your barbs may be, there are a few simple Twitter feud tips to keep in mind before you send out that first 280-character clapback. Consider:

1. Be careful when picking a fight with a person infinitely more famous and/or beloved than you.

2. If said Twitter feud comes down to you choosing to either defend, or not defend, a fascist Nazi-sympathizing dictator, err on the side of human rights.

3. If your infinitely more famous and/or beloved target decides to ignore you and exit the room, don’t keep tweeting half-hearted rebuttals into the social media void like a desperate cry for attention.

If you follow these rules, you might — and we caution, might — not end up in the situation that Alessandra Mussolini found herself in this past weekend. And yes, that’s Alessandra Mussolini, of the National Fascist Party Mussolinis. She’s the 56-year-old granddaughter of Italian dictator and Hitler BFF Benito Mussolini and, surprisingly, a current serving member of European Parliament representing Italy.

Perhaps unsurprisingly, though, she’s a fan of Donald Trump, far right political parties and attacking anyone on Twitter who speaks ill of her murderous grandfather. And we mean anyone, be it a random tweeter or one of the most famous comedians in the world.

This past weekend, Canuck star Jim Carrey, who’s taken to painting, including political cartoons, in recent years, tweeted an image of a work he’d created depicting Mussolini and his mistress, Claretta Petacci, hanging upside down after facing the firing squad. “If you’re wondering what fascism leads to,” the 57-year-old captioned the image, “just ask Benito Mussolini and his mistress Claretta.” 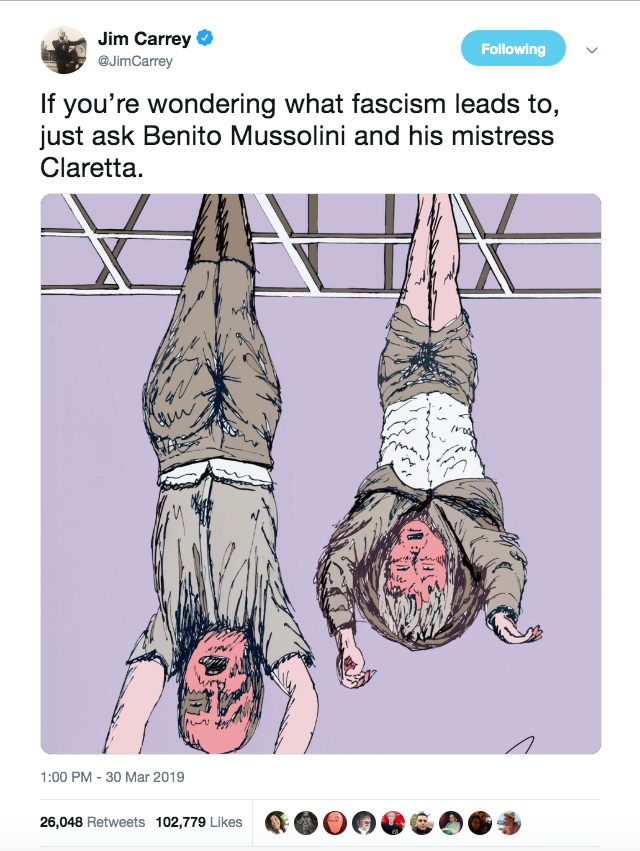 Evidently, Alessandra Mussolini took issue with the cartoon and decided to let Carrey know it, replying to the tweet with, “You are a bastard.”

This, of course, violates rules number one and two outlined above — picking a fight with someone more famous/beloved than herself and defending a fascist, Nazi-sympathizing dictator. Now granted, in this case that fascist Nazi-sympathizing dictator is her grandfather. The defence, however, remains a stretch. I mean, what is she going to say? “You never saw the side of Benito Mussolini that was fun-loving and gentle — enjoying a glass of wine and a game of bocce with family after a long day of purging political rivals and stumping for Hitler”?

Besides, any sympathy she might have gleaned from social media went out the window when she shot back at Carrey with the tried and true political tactic of dodging the issue in question and responding with “but what about you?”

Mussolini began tweeting a series of images at Carrey, including photos of a mushroom cloud, Native Americans, a slave being whipped and Rosa Parks and asking him to draw those too, thereby implying that Carrey’s own country isn’t so innocent. The only problem, as many pointed out, is that Carrey is Canadian, not American, by birth, only obtaining a duel citizenship in 2004. Also, none of Carrey’s relatives were responsible for the events in any of the images she shared. Small details, sure, but relevant nonetheless.

Worse, by engaging in all of this, Alessandra violated the third Twitter feud rule mentioned above by desperately tweeting and tweeting at Carrey long after he’d moved on, receiving no reaction from him and, therefore, no validation. This left Mussolini alone, stewing in her social media angst while others came to Carrey’s defence and roasted her themselves.

I guess this now puts the Mussolini family at 0-2 in clashes against western allies. Jim Carrey Returns to the Dark Side of Comedy in “Kidding”