Margaret Atwood Talks Twitter and “The Testaments” in Toronto 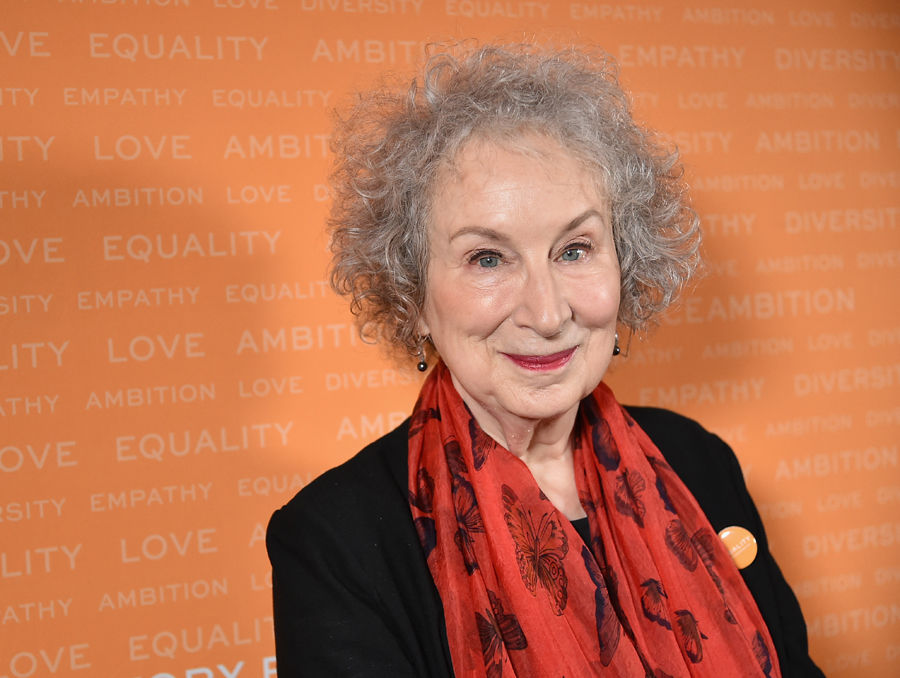 For the last decade Atwood’s cultivated a Twitter following that’s nearly two million users strong, connecting directly with her fans (and critics) on the social media site. And on Tuesday, the author sat down with Twitter co-founder and CEO Jack Dorsey for a candid talk moderated by TV Ontario’s Nam Kiwanuka in downtown Toronto.

RELATED: You Can Now Take A Writing Course with Margaret Atwood

Dorsey, who is sometimes portrayed as an enabler of hate speech and disinformation on social media by critics who feel Twitter hasn’t gone far enough to silence white supremacists and other hate groups on their platform, clearly knew his Canadian audience and no doubt earned brownie points by discussing his admiration for Atwood’s work. He noted his love for Atwood’s poetry and novels, particularly The Robber Bride.

“I see her as a sage, but also a seer into the future, but also someone who could just tell an amazing story that made you feel really good,” Dorsey added. “And it was always a little bit surprising, and I always walked away thinking completely differently. It was fiction but it related so much to the day-to-day that I wasn’t familiar with.”

“I hope you’re writing this all down,” Atwood quipped afterward. “I’ll put it on the back of my next book.”

Of course, talk inevitably turned to Twitter and its role in the ongoing cultural war between hate and disinformation groups and those attempting to confront and eradicate them. Dorsey’s response, in a sense, was a non-response.

“Our work right now is figuring out and just listening to what Twitter wants to be and just sit with that and to understand how, now that it is more of a conversational platform, how to encourage healthy conversation, how to incentivize that,” he said, as if years of racism, lies and hate being amplified on Twitter, including by the President of the United States himself, wasn’t enough for the platform to take more immediate, concrete action.

Atwood, for her part, discussed her own role in fighting back against such destructive forces, be it intentional or not. The 79-year-old noted that when she wrote her novel The Handmaid’s Tale, which has enjoyed renewed popularity thanks to the hit Hulu TV series and a new graphic novel of the book, she did so “hoping that it will not come true… I thought it would diminish, that it would become less true. Instead it became more true.” Atwood also noted how fans around the world have used the handmaiden’s robes as costumes at protests, “to great effect in different countries around the world.”

RELATED: Meet the All-Female Team that Brought Alias Grace to the Screen

When it comes to using Twitter, Atwood said that she prefers the original 140 character count to the current 280 one.

“I take advantage of the 280. But it’s made me sloppier, I have to say. You don’t have the discipline of 140,” she said. “140 is harsh. It’s like a haiku — you really have to pay attention. People who aren’t regular Twitter users will send me things that they want me to tweet for them, and I … think: ‘You have not been rigorous!’ So then I have to condense it for them, because they have just rambled on.”

She added that, when it comes to Twitter trolls who use the platform to attack her, “I just let them run. Sooner or later, it will all come out in the wash, and sooner or later, everybody will wake up in the morning and they will say: ‘Margaret was always right!’”

Of course, talk inevitably turned to Atwood’s Handmaid’s Tale sequel, The Testaments, which hits bookshelves in September. She noted that, “we’re in the editing burrow at the moment,” adding that it’s written but she has notes from her editor to incorporate. The novel will launch on Sept. 9 with a live broadcast from London, England.

Fans eager for Atwood to finish, however, will have to wait just a little longer. As she noted yesterday, “I have three days off.”

RELATED: Margaret Atwood Returns to Gilead in 2019 with Sequel to The Handmaid’s Tale