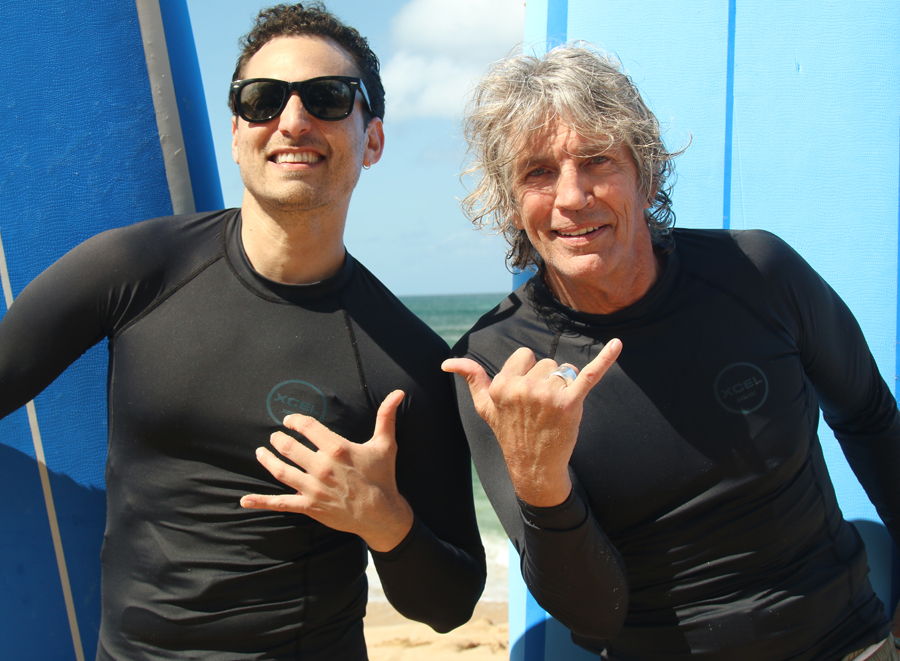 The 2007 film The Bucket List, about two terminally ill older men who travel the world doing everything from skydiving to climbing the Great Pyramid before they “kick the bucket,” popularised the eponymous phrase in the pop culture lexicon. But if you’re not terminally ill, or even terribly old, and your kids still try to push you to your limits, they’re either trying to knock you off for the inheritance money or taking part in the new television series 50 Ways to Kill Your Mum.

Debuting on VisionTV (a ZoomerMedia property) on Monday, July 15, and based on the hit Irish show 50 Ways to Kill Your Mammy, the series pairs celebrities with their parent or child and sends them to faraway locales to embark on epic (and possibly terrifying) adventures. Those celebrities include Jaleel White, 42, who played nerdy neighbour Steve Urkel on the hit 1990s sitcom Family Matters, who finds adventure in New Mexico with his mom Gail; Beverly Hills 90210 alum Jennie Garth, 47, who heads north for an Alaskan trek with her daughter Luca; and 63-year-old Runaway Train star Eric Roberts — father of Emma and brother of Julia — who embarks on a one-of-a-kind Hawaiian adventure with his son Keaton Simons.

White visited the Zoomerplex in downtown Toronto recently to discuss the series and what it meant to climb mountains and take hot air balloon rides with his mom in the New Mexico desert.

As well, we asked both Garth and Roberts via email about their experiences on the show.

Why was it important to you to step out of your comfort zone and experience these locales and adventures with your child/stepchild?

JENNIE GARTH: I am very comfortable stepping out of my comfort zone but this trip seemed like a great opportunity to do it with my daughter Luca. Add on top of that the fact that it was in beautiful Alaska, and it seemed like a fantastic opportunity we couldn’t pass on.

ERIC ROBERTS: First of all, I had no idea I was going to be traveling to Oahu or what challenges I’d be taking on. As the plan was revealed it certainly was important to me. First of all, I treasure every experience I have or will have with my stepson, Keaton. He’s said before that he really enjoys the silly or simple little trips we often take together … As for Oahu, Hawaii was never a regular part of my life. I’m from Georgia and lived in New York, and Hawaii was far away! I went there to shoot Hawaii Five-0, the current version of the series, and what a gift that was! So being able to do this with Keaton, especially since Hawaii is one of his favourite places on earth? Wow! Literally a dream come true.

The show is called 50 Ways to Kill Your Mum. What part of the trip proved most challenging for you and how did you overcome it?

JG: I think the most challenging part was the fat tire biking. We rode so far out into the Alaskan wilderness and it was so incredibly cold out that it certainly was a challenge.

ER: I have a fear of heights. I feel like the biggest challenge was that we virtually never stood on solid ground the entire shoot. We were either up on waves in the ocean, or jumping off cliffs, or gliding above the birds. As a guy who’d be very happy keeping his feet on the ground 24/7, this was new and very scary before it was exciting.

How did this experience strengthen your relationship with your child/stepchild?

JG: My daughter Luca and I already have a pretty strong relationship, but riding through the forest on a dog sled with your daughter certainly goes some distance in strengthening an already solid bond!

ER: This experience was really perfect to solidify and broaden the bond between Keaton and me. He was the leader. And he’s far better cut out as leader than I am! Keaton is a very calming guy, and he kept everyone laughing and positive and I didn’t know I could get to know him better, or open up to him more deeply, but that’s exactly what happened. I felt his caring in general, and his protective, encouraging reaction to my trepidation. And I was truly moved by it.

With your various current projects and the show 50 Ways to Kill Your Mum you find yourselves in the glare of the media as well as under the microscope on social media. How do you deal with the pressure and scrutiny of that spotlight at this stage of your lives/careers as opposed to earlier in your careers?

JG: I’ve found that staying true to yourself is the best way. If you spend every minute trying to conform to what the media wants you to be or doing what you think people want you to do you will simply lose yourself in process. Why not just be yourself and find happiness in that?

ER: This scrutiny is virtually all I’ve known my whole adult life and before. I was an actor on stage as a child. And I went to England to act at the age of 17 and I was cast on a soap opera at the age of 19. Everyone feels scrutinized no matter the size of their world. And we’re all under pressure. I’m still learning to cope with those particulars in my world.

What advice would you offer to others who’d like to travel and experience new places outside of their normal comfort zone?

JG: That they should get out and try new things! There is no way to get to know yourself better than to travel somewhere you haven’t been before or by pushing yourself out of your comfort zone. You don’t know what you’re capable of until you try!

ER: My advice would be, do it! Watch travel channels and go online and hear stories and pick places that intrigue you. Adjust your expectations so that you realize that most places aren’t going to be that different than your home. But there are some tiny differences that are such fun … And then there will be huge differences — language, for one, [and] climate. Bring love with you everywhere you go. Be curious. And guess where the kindest people in the world reside (excuse my categorizing)… Canada!

50 Ways to Kill Your Mum debuts on July 15 at 9PM ET/6 PT on VisionTV. Click here for more information.

High-Tech Gadgets For Your Next Trip

8 Books to Transport You to Exotic Locales

6 Cookbooks to Feed Your Wanderlust