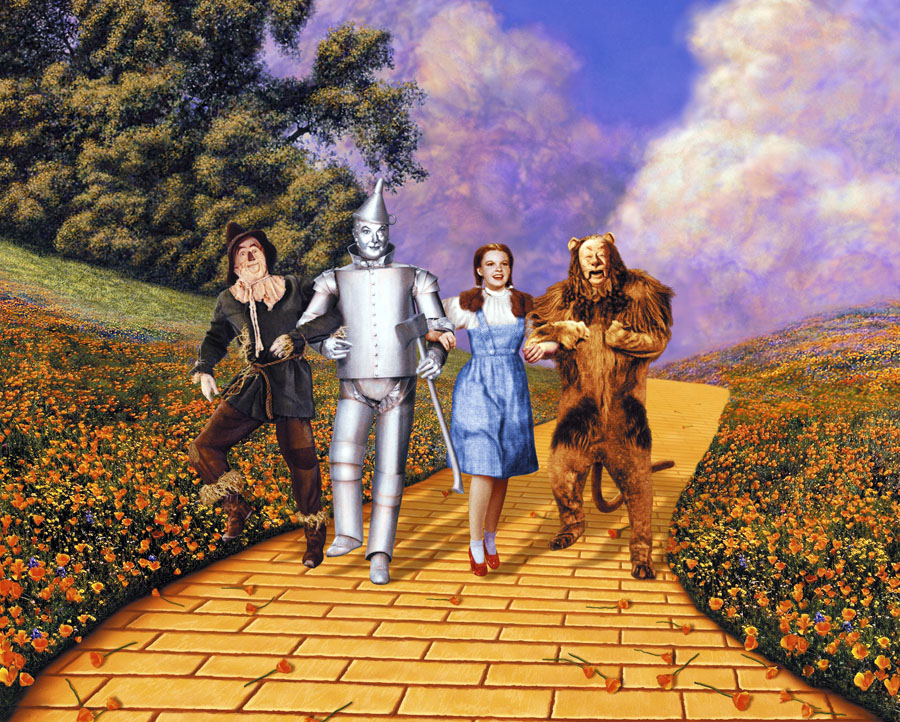 The year 1939 is often touted as Hollywood’s greatest cinematic year, both for the lucrative volume of moviegoers (ringing in in America at about 80 million box office admissions a week) as for the movies themselves. That year’s new releases included dozens of future classics — from Gone With the Wind to Goodbye, Mr. Chips, Gunga Din, Stagecoach, Of Mice and Men, The Hunchback of Notre-Dame and Mr. Smith Goes to Washington — yet it’s The Wizard of Oz that endures most of all.

Based on L. Frank Baum’s original 1900 source novel, The Wizard of Oz premiered in Canada 80 years ago, in late August, after a gala premiere at Hollywood’s Grauman’s Chinese Theatre. It was a critical hit but not (initially) a box office one. Its cultish popular appeal — and legacy — took shape over the ensuing decades.

The cultural response to the film has ranged from poems (Alexander Theroux) to the use of quotes as catchphrases (“We’re not in Kansas anymore”) to a craze for its collectible tie-merchandise after it became a belated pop culture phenomenon following its re-release in 1949. And thanks to regular television broadcasts of the movie since 1956, the Library of Congress pegs it at the most-seen film in movie history.

MGM’s classic children’s movie musical is about a lost girl, her three unusual friends, a good and evil witch, a trippy surreal land, and a self-aggrandizing, narcissistic Wizard (who is revealed to be nothing more than an opportunist). The film has a cheery, moralizing tone and a pat ending, but like Auntie Mame 20 years later, it’s about the ability to create a chosen family. Thanks to its theme of embracing society’s misfits and its theme song “Over the Rainbow,” Oz catapulted both the fictional character of Dorothy Gale and Judy Garland, the 16-year-old actress who ended up portraying her (it might have been Shirley Temple!), into gay iconography.

Then there’s the sheer spectacle of a movie that transitions from black-and-white to colour (and back again).

“Some of the scenic passages are so beautiful in design and composition as to stir audiences by their sheer unfoldment,” read Variety’s original review of the wacky and warped Land of Oz.

From the bedazzling first glimpse of the Emerald City to the expanse of the poppy field, the work of special effects director Arnold Gillespie and his team — who created the cyclone with a thirty-five foot muslin cone suspended by an overhead crane, as well as the now-famous phrase ‘Surrender Dorothy’ sky-written by the Wicked Witch of the West’s broomstick — illustrates the unprecedented creativity, energy, and cinematic innovation lavished on this unique live-action film.

The Land of Oz, a dreamlike nightmare, embraces the stylized artificiality of its set design, for example, with the garish, twinkling Technicolor allure of the Emerald City and Munchkinland’s obviously artificial plastic flowers. According to an interview with long-time MGM art department landscape painter George Gibson in The Art of the Hollywood Backdrop, the production spent three months doing scene painting in secret, developing sets with combined backings, hand-painted scenery, and matte shots — visual effects that today would almost all be done digitally. It’s a precursor to the technological innovation that allowed for the painstaking world-building of later movies like Avatar.

Meanwhile, at Bonham’s auction house in 2015, one of Garland’s ‘Dorothy’ blue gingham pinafore costumes from the film sold for more than US$1.5 million. The image of Dorothy skipping arm in arm down a yellow brick road is now the recognizable shorthand for outcasts, hallucinatory worlds, and the porous line between fantasy and reality cemented in imagination and memory.

Symbolically, Oz can also be distilled into a pair of iconic shoes — the sequinned red pumps created by the MGM costume designer known professionally as Adrian — or, more accurately, the five to ten pairs made for Garland to wear, ruby slippers so emblematic that pairs were once stolen from a museum display and not recovered until years later, in 2018 (Prada has similar sparkly red heels in its Fall 2019 collection, naturally).

At a glance, Oz seems the unlikely breakout hit of the year 1939, but it benefits by being open to interpretation. And, as an American fairy tale, The Wizard of Oz is constantly evolving. Continuations and reinterpretations include the Broadway smash musical Wicked, based on Gregory Maguire’s revisionist bestseller about the villainous witch, and The Wiz (an African-American retelling; and its much less successful film version), and even Tin Man, a steampunk miniseries starring Zooey Deschanel.

Tracing its influence beyond the literal, it’s no surprise to find it mentioned among David Lynch’s favourite films. A working knowledge of Oz — and finding logic in the Munchkins and menacing winged monkeys — is arguably the decoder ring to the American surrealist filmmaker’s own work, from Blue Velvet to his violent Oz homage Wild at Heart (down to Laura Dern’s red shoes) and the alternative reality of his masterpiece Twin Peaks.

“The Wizard of Oz is a cosmic film and meaningful on many, many different levels,” Lynch said in a recent interview with the U.K.’s Guardian.

Salman Rushdie also cites the movie as his very first literary influence and in 1992 wrote an essay about it for the British Film Institute. As he outlines that it fit more squarely into the tradition of fantastic Bollywood spectacles — the movie originally did much better in India than in Hollywood in 1939 — Rushdie argues that despite Dorothy’s quest to get home to Kansas and her frequent refrain “There’s no place like home” (and the movie’s tidy sentimental ending), The Wizard of Oz serves as a paean to homelessness and exile.

“This is unarguably a film about the joys of going away, of leaving the greyness and entering the colour, of making a new life in the place ‘where there isn’t any trouble,’” he writes. “’Over the Rainbow’ is, or ought to be, the anthem of all the world’s migrants, all those who go in search of the place where ‘the dreams that you dare to dream really do come true.’”

The 12 Most Famous Dogs From the Big and Small Screens

The Iconic Story Behind A Star Is Born

TIFF 2019: From the Joker to Judy Garland, All the Films We’re Already Excited About