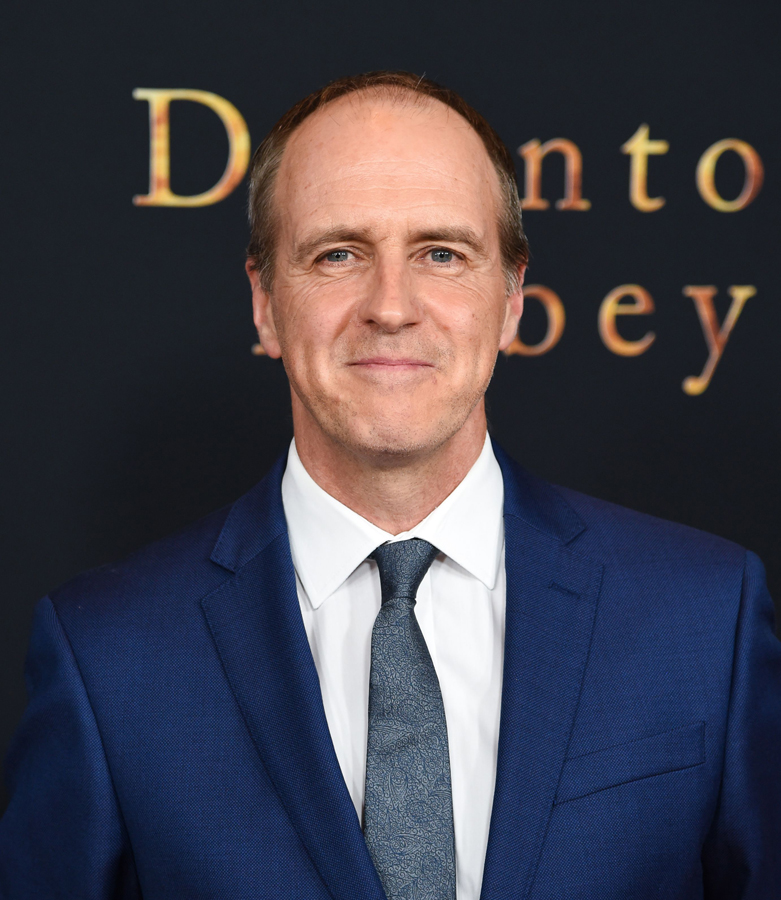 These days, however, the veteran actor is best known as Downton Abbey’s perennially unlucky servant Joseph Molesley. Over the course of six seasons, Mr. Molesley made his way ignominiously down the ranks from butler to valet and finally to footman. By the series finale, however, he’d fulfilled his lifelong dream of becoming a teacher. Downtown Abbey: The Movie finds Mr. Molesley happily settled into life away from the estate before returning to help the staff handle a grand visit from King George V and Queen Consort Mary.

In Toronto for a sneak preview of the film, Doyle, 59, tells Zoomer he’s more often recognized abroad than he is at home in England and offers a peek behind the scenes of the Downton Abbey phenomenon on both big and small screens.

In interviews, the cast has said shooting the series finale was very emotional. Was there a similar moment when you came back to make the film three years later?

KEVIN DOYLE: I’d said goodbye to that set three years previously when I thought I’d never see it again — I took some photographs, of the bells and all of that. It was a very moving day. And although we knew there was the possibility of the movie, nothing was certain, so we all had said goodbye to it. Our first day back on the movie, before we started shooting, I sort of took myself onto the set of the servants hall with the long dining table and everything and the kitchen — and Mr. Molesley’s rocking chair is still there — and I was able to walk around it by myself for a few minutes. Which was lovely. It was lovely to come back to it.

In Downton Abbey: The Movie, every character has a different reaction to the impending visit from the king and queen. Were you surprised Mr. Molesley turned out to be the most ardent royalist of them all?

Yes, I was. There hadn’t really been any sort of mention of that in the series before. Well, in a way it surprised me, but in another way, it didn’t because I can imagine a lot of people having a particular affection for them.

It was a strange time after the war for the Royal Family because I think there was a disconnect between them and the people. The reaction to the First World War was so strong that people sort of felt misled, and clearly the damage was so enormous, both in loss of life and otherwise. I think I’m right in saying that the Royal Family were advised that they needed to stop being so remote. Because in Victorian times, that was one of the complaints about Queen Victoria, that she was never seen out in public. There was no TV, so the Royal Family felt compelled to get out into the country and to be seen. What we witness in Downton Abbey: The Movie is part of that tour, around the big houses and more distant counties.

Not unlike the younger generations of the British Royal Family.

It’s interesting seeing how they’ve had to adapt. For a long time when I was growing up, they were very stuck in their ways. That was one of the complaints about them. And with the death of Diana — and what’s explored beautifully in that [Stephen Frears] movie The Queen, the reaction to that and their reaction to our reaction to that event — kind of showed that they were unable to change. There was a ridiculous argument about the fact that they didn’t lower the flag to half-mast with her death. There was talk about a republican drive! It was probably a nadir for the Royal Family. And going back Downton Abbey: The Movie, there was that same sense of them having to change. And I think that’s going on now again with the young princes William and Harry especially and their wives, making a very deliberate choice to adapt to modern times.

Downton’s historical advisor, Alastair Bruce, makes sure the Edwardian society etiquette is accurate. Did the protocol you learned playing a footman escalate because it’s a royal visit?

Not really, actually. The behaviour is pretty much the same. We had a couple of friends of Alastair come in from Buckingham Palace who were able to offer insights about if the behaviour was any different with the king and queen in the room, little things like there was a bit more bowing.

Have you meet any of the Royal Family in real life? Were you on set when the Duchess of Cambridge visited the Downton production?

Yes. In fact several royals! Previously, at other times in my career [like at the Royal Shakespeare Company], I’ve met Prince Charles. And Princess Diana.

Did you get a crash course in protocol beforehand?

A little bit, but when they do things like going out to see a play, they’re very laid back. If you want to, you can refer them to them as ‘sir,’ but thereafter you just sort of chat to them. I was far more self-conscious when we went to the White House and met Michelle [Obama]. That was like meeting royalty!

It’s quite a feat to steal the humorous high point from Dame Maggie Smith — I arguably think Mr. Molesley’s big scene steals the movie. What was it like filming that formal royal dinner?

I knew it was my big scene, and it’s the culmination of that whole downstairs storyline about them fighting back and trying to retain their own dignity and the dignity of the house. Although characters like Mr. Carson and the other servants would have been thinking it, nobody had the enthusiasm to voice it. And of course, Molesley does. When it came to shooting the scene, it was terrifying because I knew it was important and I knew it was a very important comedic moment so I wanted to get it right. Especially, you know, in front of Dames Penelope Wilton and Maggie Smith. It’s daunting having your moment in front of all of those people. So I was glad when it was over. And they applauded, which was lovely!

There was an interview where Laura Carmichael (Lady Edith) discussed Downton’s elaborate dinner scenes and  mentioned that because they take so long to film, the actors  joke about having a food fight. What mischief do you get up to in those scenes?

Don’t feel bad for those who are sat around the dinner table complaining about food. ‘Oh, we’ve got to have another mouthful of this food, again and again.’ It’s true because there are so many people around the table, they’ve all got to be shot at different angles, so everything has to get covered and they have to keep repeating the same thing over again. But we’ve got to stand through all of that. And there’s never enough room in that bleeding dining room to bring in other chairs. In downtime between takes, we’re basically stood around like servants. Hours and hours of standing.

You’ve got to get those leaning boards like they used in Hollywood back in the 1930s.

The problem is that on the wall are priceless, priceless paintings. You can’t lean against anything. So you’re always aware, especially in that dining room but in all those rooms at Highclere, just how valuable everything is.

You once likened the skill involved in being servant in Downton’s era to acting.

The green baize door [that separates the servants area from the house] is like the stage door, really. And when you go through it, you’re performing. The physicality is different upstairs as well. You can be much more relaxed when you’re downstairs, slope around, but when you go up the stairs and through that door, suddenly you become more erect and you are—and Alastair would always remind us—you are giving a performance. And although you’re meant to be invisible, the service is meant to not be noticed, there is still a great pride in getting it right. And we actors always took great pride and satisfaction from getting the choreography of that service right.

Mr. Molesley was originally a relatively minor, short-lived role, but it expanded, and your portrayal evolved into a fan favourite, an unlikely everyman hero. He seems to be the only below-stairs character who got away from a life of service and bettered himself.

I think other people in the series — like Daisy — have similar aspirations. It’s just that he was offered the chance. And actually, it’s not just locked into the downstairs people. If I think about Lady Edith, you can imagine what her life was destined to be — the second daughter: she was to have a good marriage, raise children, and that would be it. Nothing else was expected of her. But she decided that she wanted more from life and because she’s exposed to outside influences, she gets the job editing a magazine in London and begins to see worlds beyond the world of her parents.

Who is your favourite character above stairs?

Definitely Lady Edith. Because of that journey, I think.

You’ve travelled and met fans of the series around the world. In your experience, do the downstairs stories and characters seem to resonate more with fans?

I think they do.

Yet Downton devotees always seems to come out in fancy dress as the upstairs people.

Has anyone ever come to an event dressed as a butler?

I’m sure there have been one or two but I’ve never seen them. Maybe they’re harder to come by — it’s easier to put a fascinator on and turn up, not so easy to find a footman’s costume.

Working as a butler, valet and footman, do you have any etiquette tips? Can you properly set an Edwardian table?

Probably not! I mean, my fundamentals are there: knife, fork, spoon. But don’t count on me for a fancy dinner party.

ALL IN THE FAMILY

Was there much teasing of Jim Carter (Carson the butler) when his wife, actress Imelda Staunton, was cast in the movie as posh upstairs character Lady Bagshaw?

No, because I don’t think we needed to! There were only three days when they were together, and I think it was mostly in the dining room scene. Imelda was saying just this past week that she wanted him to serve her wine, but he never did. He refused to. [laughs] So I was the one having to do it, to be the footman serving Lady Bagshaw.

What is your favourite behind-the-scenes moment from making the film?

I don’t think there’s just one …  in the end, it’s all about the people you get to know, not only the other cast members, but the crew, who all stayed with us over that period as well. Getting close to that group of people because acting is all about interrelating with other folk.

Now that we know how Mr. Molesley is doing, what’s next for Mr. Doyle?

I just filmed in Ireland, a period mystery drama called Miss Scarlet and the Duke [starring Kate Phillips, who plays Princess Mary in the Downton movie], which is going to be on PBS and in Canada early next year sometime. We just wrapped on that. I loved that, a really enjoyable show and beautifully written.

Downton Abbey is in theatres now.

Review: Downton Abbey Lives On In Trite But Fun Movie

Then & Now: The Downton Abbey Film Picks Up Where the Show Left Off