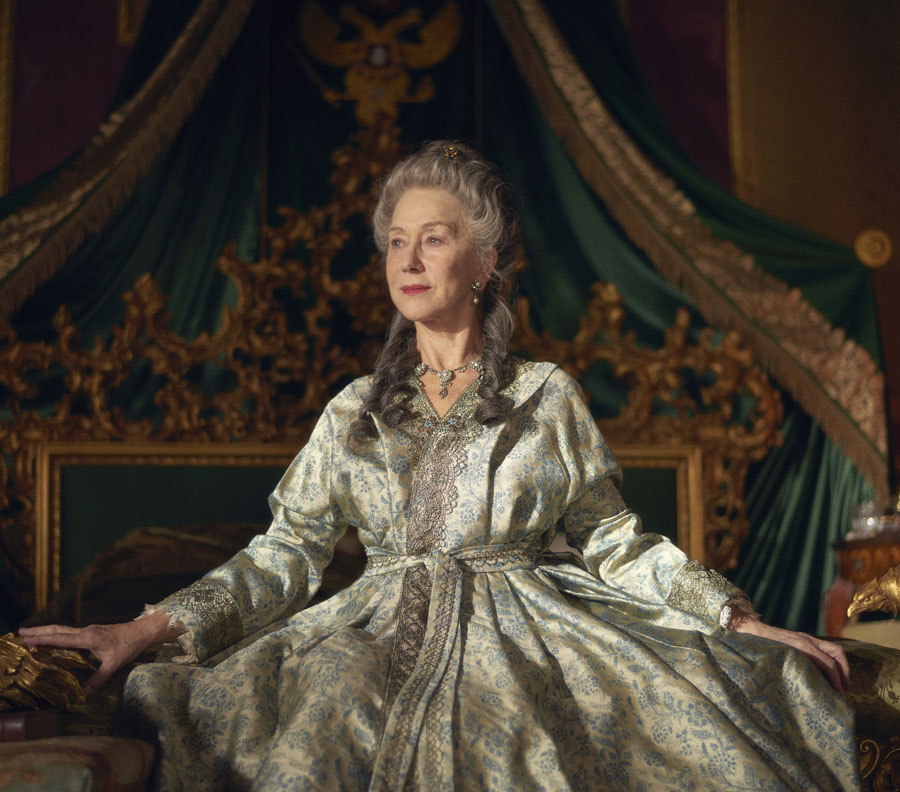 Helen Mirren as Catherine the Great in the HBO miniseries of the same name. All images courtesy of HBO

When Dame Helen Mirren makes a request, it’s almost akin to a royal decree. The 74-year-old has, after all, played enough royals during her illustrious stage and screen career, including Queen Charlotte in The Madness of King George, Cleopatra in a National Theatre production of Antony and Cleopatra and, of course, Queens Elizabeth I & II (she’s the only actress to ever portray both on screen).

So when a reporter once asked her what role she’d still love to play, she inadvertently put out a royal role call.

“Rather randomly I said, ‘Well, Catherine the Great would be interesting,’ never imaging for all of those years that I’d actually get to do it,” Mirren told me during a recent interview. “And then, of course, you know, life is strange and sometimes these extraordinary miracles happen and I did get to play her.”

In fact, Catherine the Great — the eponymous character in Mirren’s new HBO miniseries — marks the fifth major monarchical role of her career, which technically adds up to a royal flush.

“Naturally, women who were complex, who were vulnerable, who were powerful, who were successful, inevitably as an actor you are going to be drawn to just the idea of playing someone like that,” Mirren said. She added that Catherine “was operating [in] 18th century Russia, a place of such unimaginable wealth and such unimaginable poverty. So, you have got a world of great extremes that you are dealing with. You are dealing with a culture that is very, very fundamentally different from your own.”

In the miniseries, Catherine, an iron-fisted empress, takes the Russian throne from her husband, Peter III, via coup d’état, and then struggles to maintain rule in the face of saboteurs looking to topple her at every turn. Filming of the four-part show included shooting in real-life Russian palaces allowing Mirren and her cast mates to, “literally live in that world for a short period of time … To shoot in those incredible Russian palaces, to wear those extraordinary clothes, and then to engage in the culture of the world, the psychology of that world, [was] a very powerful experience for me.”

The shoot also proved a powerful experience for the Russian officials who kept a close watch over the palaces and the cast and crew operating within. BAFTA-winning British actress Gina McKee, 55, who co-stars as Catherine’s close friend Countess Praskovya Bruce, laughed as she recalled a moment during filming in the historic Peterhof Palace in Saint Petersburg when Mirren’s dress brushed against a priceless chair, causing panic among palace officials.

“Suddenly this consternation went around the room and I watched [Mirren] and she was so gracious and calm and yet she looked at me just for a nanosecond and she had this little glint in her eyes. Gave me the giggles and it said everything,” McKee explained. “She has this ability to communicate with such fantastic skills — obviously she employs them as an actor, but if a look could say a thousand things, it certainly did. I just felt, my god, that’s fantastic.”

On screen, however, Catherine finds decidedly less to laugh about, with Mirren, as the empress, mourning the aging process as a thief of opportunity.

“When I was young,” Catherine laments, “I dreamed of freedom and have dreamed of breaking chains. But as you get older, your choices narrow.” It’s an ironic line, in some ways, when delivered by Mirren — an actress who’s spent the last three decades carving out her own legacy while helping to shatter popular conventions for how women in their 50s, 60s and beyond are perceived in Hollywood.

In 1991, the year she turned 46, she landed the role of detective Jane Tennison on the British TV series Prime Suspect — a rare opportunity to play a female detective who anchors her own show, solving murders while addressing misogyny in the police ranks and other issues from abortion and alcoholism. Mirren scored two Emmys and three British Academy Television Awards over seven seasons, setting the actress on an upward career trajectory that continues to this day and includes roles that range from celebrated monarchs to criminal matriarchs.

On a 2018 episode of The Late Late Show with James Corden, she illustrated the point — literally and lyrically — when she engaged in a rap battle with the host and dropped the verse: “I’ve played the Queen / But also warriors and witches / Crime lords and wizards, bosses and bitches / Detectives and whores / From Altman to Shakespeare / The only role you ever played is ‘Guy Who Begged to Be Here’.”

Mirren, however, balked humbly at the suggestion that she blazed a trail for older actresses. Instead she credited the good fortune of “a change in the culture, a change in attitudes, which really has taken energy and force over the last 10 or 15 years. I think I was luckily well-placed at that point to be able to take advantage of that.” She added that her regular returns to the stage help her stay fresh on screen. “I have never relied upon my film or television career to be the only string in my bow.”

“A lot of us find our lives in this regular pattern and we forget to be curious, we forget to learn, or we find there isn’t time or we don’t make time rather,” McKee added. “She has this curiosity and energy which means that she wants to learn, and I think if you keep that, if you have that, you live well and I think you age well.”

Catherine the Great is streaming now on HBO and on Crave in Canada.

Helen Mirren: Top 5 Tips to Get Through Life