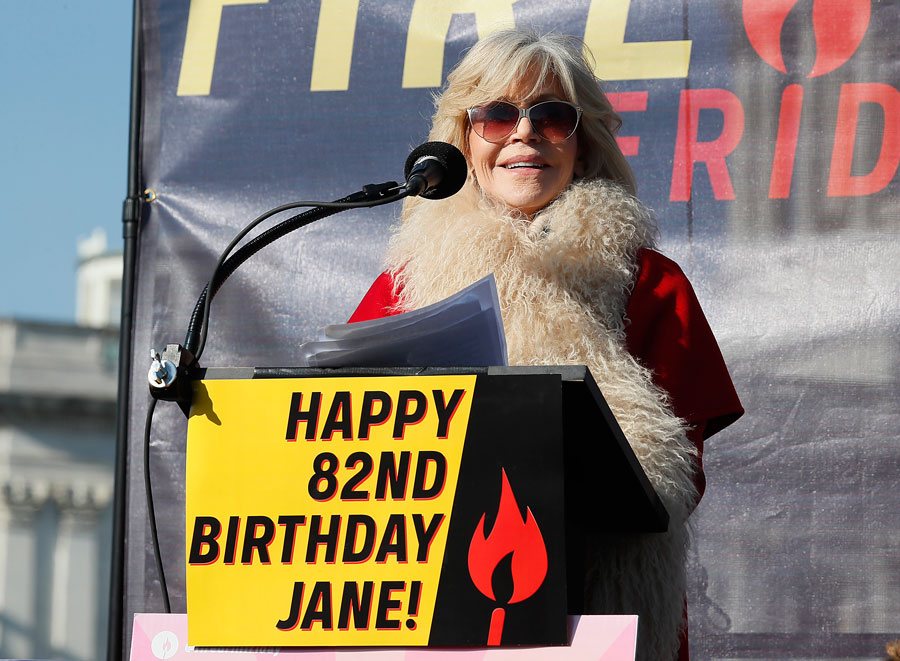 “I never would have expected my life to get so much fuller and, in some ways, more meaningful as I moved into my eighth decade,” Jane Fonda wrote on her blog this week, in a reflective post ahead of her 82nd birthday, which she celebrates Saturday. The legendary actress and activist was writing from Washington, D.C., where she has been protesting – and getting arrested – since September after she launched a civil disobedience campaign to pressure lawmakers to take action on climate change.

Passionate and outspoken on everything from teen access to reproductive health to workers’ rights to a higher federal minimum wage, Fonda is now focusing her time and energy on the environment. “Climate, climate, climate,” she says when we sit down for a chat while she’s in Toronto in September as L’Oréal Paris ambassador. “But climate isn’t an issue among many, climate is everything. If we don’t do something about this we’re not going to be able to do anything about everything else.”

Beginning with her first feature filmTall Story in 1960 to her current role as the most visible climate-change protestor on Capitol Hill, the two-time Academy Award winner’s journey of transformation and reinvention is reason to celebrate Jane Seymour Fonda’s 82 years on this earth.

Fonda’s bestselling 2005 memoir My Life So Far and Susan Lacy’s 2018 documentary Jane Fonda in Five Acts have helped reframe the conversation around the outspoken and often-controversial actress, who has emerged in her fifth act as self-deprecating and breathtakingly candid. We like her all the more because she embraces her contradictions, including her candour about how her first four acts were shaped by men. It began with the trauma of her mother’s suicide and a strained relationship with her cold, distant father, actor Henry Fonda. When she stepped out of his shadow, it was to marry French director Roger Vadim. After that marriage crumbled, she wed activist Tom Hayden. In her fourth marriage to media billionaire Ted Turner, she took on the role of country-club wife. She admits it’s taken her whole life to finally emerge as her own woman.

Fonda’s role as global ambassador with L’Oréal Paris is strategic. Likewise, Grace & Frankie’s phenomenal success as Netflix’s longest-running original series is because, at heart, it’s about resonant issues and inspirational messages around aging with vitality. “I think the fact that we’re women in our 80s who still live robust lives and have love, and business, and creation, and deep friendship at our age, I think gives women hope,” Fonda tells me. “I mean, I know it because women tell me that. Women come up and say what it has meant to them, just to see the two women who overcame such a horrific crises, I mean, [after 40 years of marriage in the show], the men leave you for each other, it just undercuts your sense of yourself. ‘Who Am I, if I didn’t know this was the reality that was going on under my eyes?’, that’s hard to overcome, and the fact that we did and that we’re in fact thriving is important to women at our age.”

Her tireless work on political and social causes was recently featured on the cover of the Duchess of Sussex’s British Vogue Forces of Change issue. Fonda was an early practitioner who anticipated today’s cultural moment where it’s impossible for a celebrity to avoid having a stance on the day’s pressing issues. Over the decades, the Vassar drop-out has demonstrated around the world for Indigenous and women’s rights, voiced her opposition to the war in Iraq and, most notoriously, in Vietnam. Her anti-war activities earned her the enduring nickname ‘Hanoi Jane’ and an accumulated FBI file of more than 23,000 pages. Now Fonda is lending her fame to the climate crisis, hoping to do for that pressing issue what her ’80s workout videos once did for the aerobics craze.

Fonda stole the show in a sequinned black tuxedo at Glamour’s Women of the Year Awards last month, even though there was a star-studded guest list that included Ava DuVernay, Charlize Theron, and lifetime achievement recipient Margaret Atwood. A lithe and statuesque 5’8”, she wears clothes as well as a professional model, mainly because she worked briefly as a New York model to pay for acting classes. At 21, Fonda made the cover of Vogue (in 1959, shot by Irving Penn) and 60 years later she still graces covers from W Magazine (at 77) and Zoomer to another special issue, this one on beauty, of British Vogue (at 81). At 80, she strutted the Champs-Elysées catwalk in a tiger-print gown by Balmain alongside other L’Oréal Paris brand ambassadors like Helen Mirren and Liya Kebede in L’Oreal’s first runway show in Paris. She’s stylish whether it’s a canary yellow Atelier Versace, belted green Balmain jumpsuit, or navigating the taffeta train of a Schiaparelli gown up the tapis rouge steps at Cannes.

The morning after a gala the actress posted an Instagram photo of her bedhead and haggard bare face. As the actress explained during her Toronto talk, she couldn’t undo the zipper on the heavy dress she’d worn and, because she lives alone, had to sleep in it. The next morning her longtime makeup artist David DeLeon arrived to get her ready for another event and got her out of the gown, but not before she insisted he snap the “after” photo so she could share the “reality” of glamour. Fonda has been candid about her many “bionic” parts and hip replacements (three) as well as her decision to opt for cosmetic enhancements. She’s openly confirmed that in spite of the no-plastic-surgery pact she once made with friend Sally Field, she’s broken it. When Fonda and co-star Tomlin did the Autocomplete Interview for Wired to “answer the internet’s burning questions,” the query ‘What is Jane Fonda’s beauty secret’ came up. The actress paused a beat for effect before her deadpan reply: “Good genes and a lot of money.”

After she became an activist, Fonda’s film work began to dovetail with the socially relevant issues that interest her. Through her production company, IPC Films, she produced The China Syndrome in 1979 about the threat of nuclear fallout, and also produced and starred in Coming Home, about the plight and anger of Vietnam veterans, which earned Fonda her second Best Actress Oscar in 1978. The radical feminist hit 9 to 5 – released in December 1980, the second-highest-grossing film of the year– was inspired by the work of friend and fellow activist Karen Nussbaum, an early advocate for working women’s rights. Its themes of exposing workplace sexual harassment and the gender pay gap were progressive in their day and are just as timely today. And Fonda is still championing those causes.

Cash and In Kind

“I feel good that I’m still around. I didn’t expect it,” Fonda joked at her 80th birthday celebration. For the occasion, she invited friends to toast her milestone, but they had to pay for the privilege: the black tie dinner was a fundraiser to benefit the Georgia Campaign for Adolescent Power and Potential, a non-profit for at-risk youth she founded in 1995. Fonda still organizes and canvases year-round whether it’s an election year or not, and can often be found knocking on doors with Working America, an organization that informs non-unionized workers on health care, education and Social Security issues. This summer she went door-to-door in Modesto, CA and Scranton, PA.

Even when Fonda isn’t trying to be fashionable, she has influence. Clad in retro-futurist Paco Rabanne for cult classic Barbarella, for example, her sci-fi sex kitten inspired countless fashion designers, and her now-famous androgynous shag haircut, fringed handbag and trench-coat combo in Klute captured the era’s zeitgeist of carefree glamour. Jane Fonda’s Workout videos launched a fitness craze among baby boomers, but her leotard and tights also influenced the 1980s taste for dancewear and fitness-inspired fashion. You could argue Fonda is the spiritual grandmother of the athleisure trend, from Olivia Newton John’s Physical phase to Flashdance to Lululemon.

Like Jacqueline Kennedy and Michelle Obama, the actress is well-versed in making statements through her wardrobe. The sober black pantsuit Fonda wore to accept her first Best Actress statuette for Klute in 1972 was intentionally nondescript—it was chosen “because I felt it suited the somber times,” Fonda later recalled when she auctioned off many of her possessions. (It was still Yves Saint Laurent couture.) These days, however, Fonda says the climate crisis has made her anti-consumerist. She recently visited Saks Fifth Avenue’s New York flagship store, not to shop, but to record an episode of Harper Bazaar’s “Dare I Say” podcast. In it, she said her signature-style, bright-red wool coat that she wears for Capitol Hill protests, and which she used as a mattress the night she got arrested, was “the last piece of clothing I’ll ever buy.”

Next Generation of Women

When I ask if she’s optimistic about the future of the entertaining industry and the next generation of actresses, Fonda sings the praises of co-star June Diane Raphael, who plays her daughter Brianna in Grace & Frankie. “She’s a real leader,” Fonda says of Raphael, who has just published Represent, a woman’s guide to “running for office and changing the world.’”

As for the #MeToo and #TimesUp movements, “this isn’t gonna go away, something has opened up that didn’t exist before,” she says. “The fact that it’s being talked about, it’s important.” While Fonda says it was “white movie stars that forced it onto the front pages,” she acknowledges that it originated in conversations black women like Tarana Burke were having much earlier.

In addition to health-routine staples like meditation and getting eight hours of sleep, Fonda reads The New York Times, The Los Angeles Times, The Nation and The Guardian (and that’s just for starters), and is a voracious book reader. When we talked in September, she had already devoured the advance copy of one major fall title and was recommending it with enthusiasm. “Naomi Klein’s new book called On Fire is a must-read,” Fonda urged me. “She’s my climate guru.”

The iconic activist and actor breezed through Toronto in September as part of her global ambassador role with L’Oréal Paris, but she is no stranger to the city. This is where she filmed movies like Agnes of God and Stanley & Iris. Fonda remembers that, while shooting Agnes, she spotted a Wayne Clark gown in the window at Holt Renfrew and wore it to co-host the Oscars the following year. (And yes, she still has the dress). Her infamous Cleveland arrest in 1970 —and that legendary fist-pumping mug shot—happened after she got off a flight from Canada where she’d been on a speaking tour against the war in Vietnam. That, and Fonda’s mother Frances Ford Brokaw was born in Brockville, Ontario.