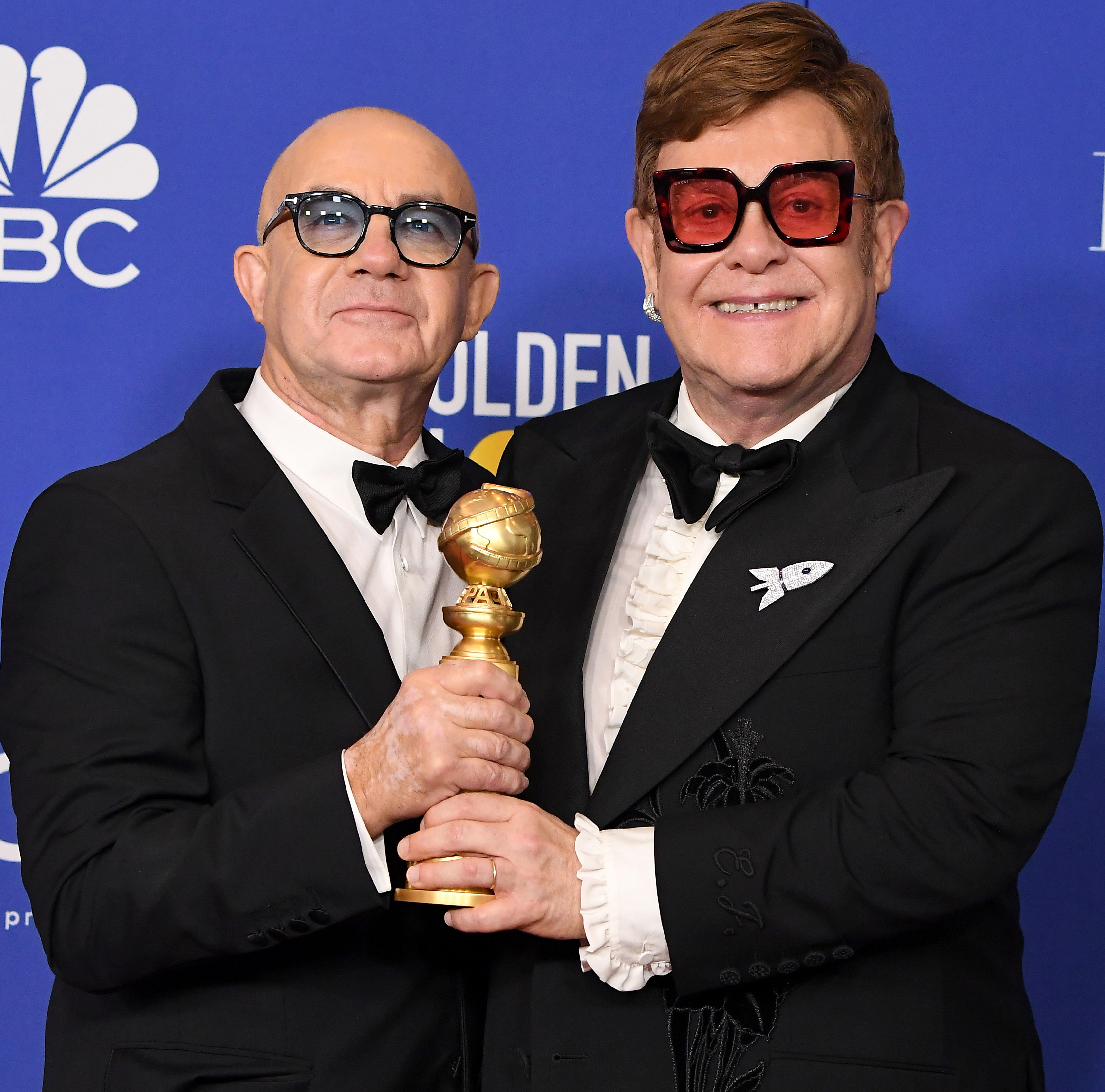 People love the Golden Globes because they’re the less predictable, more fun sibling of the Oscars. And Sunday’s 2020 Golden Globe Awards offered the unpredictability, good times and, yes, even drunkenness that fans who tune in adore.

Comedian Ricky Gervais, 58, took on hosting duties for the fifth and (supposedly) final time, skewering celebrities for their hypocrisy at the same time complaining about having to host the show when in reality he had no obligation to agree to do so. He did, however, have a few good quips, including likening actor Joe Pesci to Baby Yoda and joking about how director Martin Scorsese controversially likened Marvel movies to theme park attractions, adding, “Although I don’t know what he’s doing hanging around theme parks. He’s too short to go on the rides.”

From there, our favourite moments of the evening followed.

Rock legend Elton John proved one of the big winners at the 2020 Golden Globes. The 72-year-old had previously won his only Golden Globe in 1995 for Best Original Song for “Can You Feel the Love Tonight” from The Lion King and now, 25 years later, he found himself nominated in the same category against a song from the remake of The Lion King — Beyoncé’s “Spirit.” John and longtime lyricist Bernie Taupin, 69, took home the award for their tune “(I’m Gonna) Love Me Again” from the biopic Rocketman.

After taking the stage earlier in the show to an extended standing ovation, John and Taupin accepted the award with the latter noting, “This is a song that we wrote for a movie that deals with our relationship. And it’s a relationship that doesn’t happen very much in this town. It’s a 52-year-old marriage.” John added, “This is the first time I’ve ever won an award with him. We’ve never won a Grammy. We’ve never done anything together but this. So thank you.” In fact, all of John’s five Grammy awards were either solo honours or for works with other collaborators. Taupin, meanwhile, won a 2005 Golden Globe for Best Original Song for penning the lyrics to “A Love That Will Never Grow Old,” a song performed by Emmylou Harris in the film Brokeback Mountain.

Actor Taron Egerton also won the award for Best Performance by an Actor in a Motion Picture – Musical or Comedy for playing Elton John in Rocketman, thanking the rocker in his acceptance speech “for the music, thank you for living a life less ordinary and thank you for being my friend.”

Egerton, however, wasn’t the only person who won for portraying a show business legend. Renée Zellweger, 50, returned to the Golden Globes 17 years after her last win to take home the award for Best Performance by an Actress in a Motion Picture – Drama for portraying Judy Garland in Judy.

“The conversations that I have had with people internationally, they just want to express their love of Judy Garland and tell [me] about the great personal significance of her legacy,” the actress said when accepting the award. “Her humanity has been a great reminder that the choices we make matter. What we make matters and how we choose to honour each other in our lifetimes can matter a great deal down the road.”

Australia and Activism on Our Minds

Russell Crowe, 55, won the award for Best Performance by an Actor in a Limited Series or a Motion Picture Made for Television for playing former Fox News CEO Roger Ailes in The Loudest Voice, and sent a statement from his native Australia, where he and his family are among the countless people dealing with the raging wildfires across the nation.

“Make no mistake. The tragedy unfolding in Australia is climate-changed based,” the statement said. “We need to act based on science, move our global workforce to renewable energy and respect our planet for the unique and amazing place it is.”

In fact, the Australian wildfires were referenced multiple times throughout the evening, along with acceptance speeches that dealt with politics, war, activism and a rousing monologue from actress Michelle Williams, 39, who won the award for Best Actress in a Limited Series for Fosse/Verdon. In her acceptance speech, she spoke about a woman’s right to choose what they do with their bodies and the importance of getting women to vote and shape the world they want to see.

“So, women 18 to 118,” she said, “when it is time to vote, please do so in your self-interest. It’s what men have been doing for years, which is why the world looks so much like them, but don’t forget we are the largest voting body in this country. Let’s make it look more like us.”

Saturday Night Live cast member Kate McKinnon introduced DeGeneres, noting that, “In the 1990s, when Ellen’s sitcom was at the height of its popularity, I was in my mother’s basement lifting weights and thinking, ‘Am I gay?’ And I was. The only thing that made it less scary was seeing Ellen on TV.”

DeGeneres accepted the award with humour, thanking her “husband” and “two children” before getting serious about being grateful for the opportunity to inspire others to make their lives and the world better. “It’s a prestigious award,” she also noted, “and what I like most about it is that I knew I would win.”

Actress Charlize Theron, meanwhile, introduced Hanks, declaring that, “This is why we love Tom. He stands for all the qualities we aspire to on screen and off.” The actor delivered an emotional acceptance speech, thanking his family and people he’s worked with before taking a poll of the celebrities in attendance by asking, “How many people in this room have a clip package that includes The Love Boat?”

The Lighter Side of the Globes

The 2020 Golden Globes also contained a number of lighter moments, like Olivia Colman enjoying a few too many cocktails before accepting the award for Best Performance by an Actress in a Television Series – Drama for playing Queen Elizabeth II in the third season of The Crown.

“I don’t know what else to say because I already got a little bit boozy because I thought this wasn’t gonna happen,” the 45-year-old quipped. She added, “For the last year I feel like I’ve been living someone else’s life, and now I’ve won someone else’s award.”

As far as unpredictability, Netflix was expected to take centre stage at the 2020 Golden Globes, with films like Marriage Story, The Irishman and The Two Popes and TV series like The Crown wracking up a total of 34 nominations. But by the end of the evening, the streaming service nabbed only two awards — Laura Dern, 52, winning Best Performance by an Actress in a Supporting Role in any Motion Picture for Marriage Story and Colman’s win for The Crown, while Amazon Studios took home two awards for the hit British series Fleabag. The First World War drama 1917 won Best Motion Picture Drama and Best Director for Sam Mendes, 54, who dedicated the win to his grandfather who served in the war, while Quentin Tarantino, 56, saw his film Once Upon a Time … in Hollywood nab three awards, including Pitt’s, Tarantino for Best Screenplay – Motion Picture and the Best Motion Picture, Musical or Comedy honour.

The biggest upset of the night, however, came in the Best Motion Picture – Animated category, with the film Missing Link beating out three major Disney films including The Lion King, Toy Story 4 and Frozen 2, which this weekend became the highest grossing animated film in history.

Russell Crowe, 55, Best Performance by an Actor in a Limited Series or a Motion Picture Made for Television, The Loudest Voice

Stellan Skarsgård, 68, Best Performance by an Actor in a Supporting Role in a Series, Limited Series or Motion Picture Made for Television, Chernobyl

Brian Cox, 73, Best Performance by an Actor in a Television Series – Drama, Succession

Quentin Tarantino, 56, Best Screenplay – Motion Picture, Once Upon a Time … in Hollywood

Laura Dern, 52, Best Performance by an Actress in a Supporting Role in any Motion Picture, Marriage Story

Patricia Arquette, 51, Best Performance by an Actress in a Supporting Role in a Series, Limited Series or Motion Picture Made for Television, The Act

Olivia Colman, 45, Best Performance by an Actress in a Television Series – Drama, The Crown

Brad Pitt, 56, Best Performance by an Actor in a Supporting Role in any Motion Picture, Once Upon a Time … in Hollywood

Joaquin Phoenix, 45, Best Performance by an Actor in a Motion Picture – Drama, Joker

Renée Zellweger, 50, Best Performance by an Actress in a Motion Picture – Drama, Judy