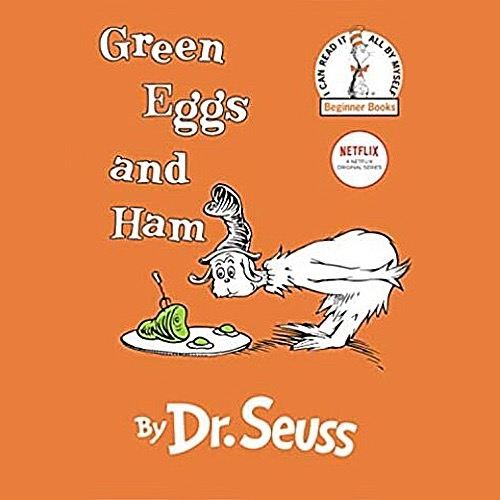 Dr. Seuss wrote 'Green Eggs and Ham' on a bet with his publisher. He won the bet, but the publisher never paid up.

Sixty years ago today, the beloved Dr. Seuss (real name Theodor Geisel) book Green Eggs and Ham hit bookshelves. In the decades since, generations of families around the world have enjoyed the timeless tome.

But as it often happens, sometimes the story behind the story is even more intriguing. So from the $50 bet that launched the book to the struggle to write it to its pop culture influence, we’re marking the 60th anniversary of Green Eggs and Ham with five fascinating facts about the beloved children’s book.

The Book Was Written to Win a $50 Bet

Yes, one of the great children’s books of all time was written to win a bet. As Dr. Seuss biographer Brian Jay Jones noted on Twitter, the children’s publishing imprint that would publish the story — “Bright and Early Books for Beginning Beginners” — used a simple vocabulary of only 182 words that the youngest readers could read and understand. And to make things interesting, Seuss’s publisher, Bennett Cerf, bet the author $50 that he couldn’t write a book using only 50 of those words. As a result, Seuss penned Green Eggs and Ham using only these 50 words: a, am, and, anywhere, are, be, boat, box, car, could, dark, do, eat, eggs, fox, goat, good, green, ham, here, house, I, if, in, let, like, may, me, mouse, not, on, or, rain, Sam, say, see, so, thank, that, the, them, there, they, train, tree, try, will, with, would, you. Cerf, however, never paid up.

The Agony and the Ecstasy of Writing Green Eggs and Ham

Even though he won the $50 bet, penning one of the world’s most beloved children’s books proved an agonizing feat at times. As Jones noted on Twitter: “Green Eggs and Ham would be its own kind of misery, requiring Seuss to create complicated charts, checklists and multiple word counts as he struggled to keep track of the words he was using.  He also imposed on himself a requirement to stick with one-syllable words. For those keeping count, the one exception to the ‘one syllable rule” would be the word ‘anywhere,’ which was composed of two short words that early readers would know.”

Jones added, “Rhyming, too, could be tough with a 50-word restriction ‘The agony is terrific at times, and the attribution is horrible,’ he said. ‘If you’re doing it in quatrains and get to the end of four lines and can’t make it work, then it’s like unraveling a sock.’ Dr. Seuss delivered Green Eggs and Ham to Cerf in 1960. He was glad to be done with it, and somewhat nervous about how it would be received.”

The book, of course, went on to eventually sell millions of copies and become one of Dr. Seuss’ most popular books.

Green Eggs and Ham has been adapted in various media forms in the decades since its publication. In 1966, for example, actor Marvin Miller, who voiced Robby the Robot in the classic 1956 sci-fi film Forbidden Planet, won a Grammy Award for his recording of Green Eggs and Ham. In 1992, Canadian band Moxy Früvous turned the text of the story into a song called “Green Eggs and Ham” on their self-titled 1992 debut disc.

And last year, Netflix launched a hit animated series called Green Eggs and Ham starring the voice talents of big screen stars like Michael Douglas and Diane Keaton, among others. The success of the first season led to its renewal for a second season.

And this past July, Tom Hanks showed off his copy of the book during an interview on The Today Show.

Green Eggs and Ham and The Law

In 2007, an inmate in a New Hampshire jail sent a judge an egg in the mail as part of his complaint about the food served in his correctional facility, which served as the impetus for his lawsuit against the state’s Department of Corrections.

Talk About “Eating Your Words”

The success of Green Eggs and Ham did have its downside for Dr. Seuss, however. Biographer Brian Jay Jones tweeted, “For the rest of his life, Dr. Seuss would find himself at book signings and dinners in his honor where he would be served plates filled with green eggs and ham. ‘Deplorable stuff,’ he said later, ‘The worst was on a yacht in six-foot seas.’”

Still, if you want to try your hand at making green eggs and ham, Canadian Chef Michael Smith has an easy recipe you can try.