Aaaay! Henry Winkler, Who Embodied Cool for a Generation as The Fonz, Turns 75 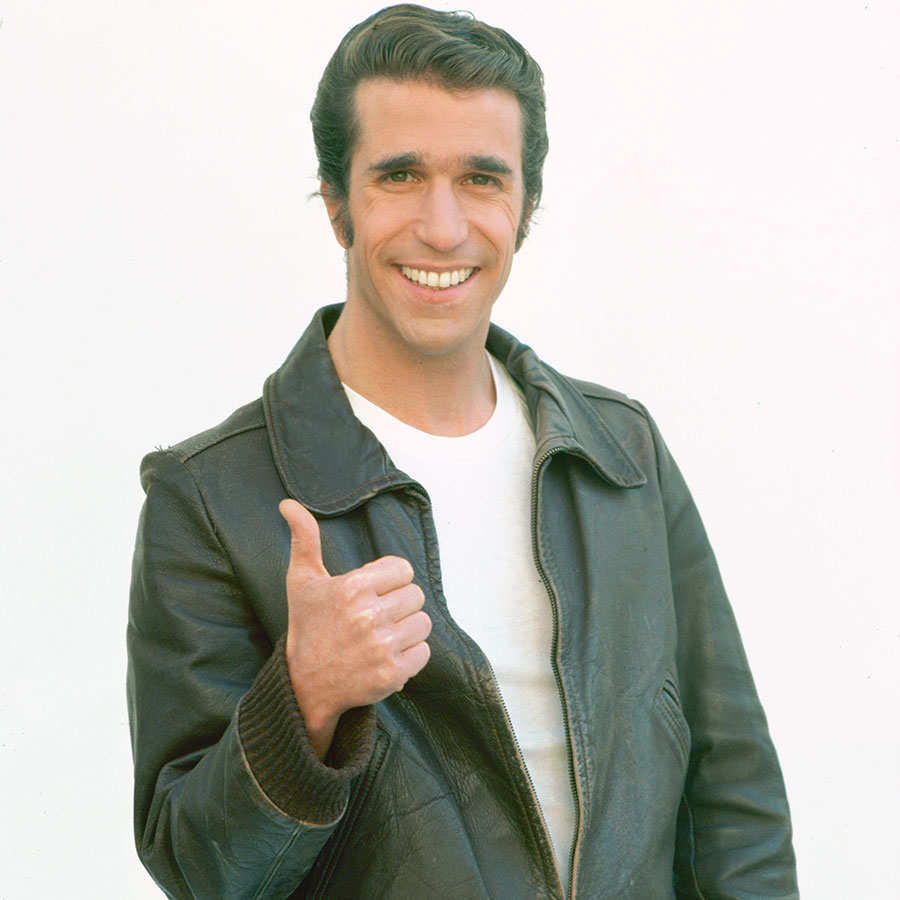 It seems congratsamundo are in order for Henry Winkler as, in further evidence of the seemingly accelerating passage of time, the actor/producer/director turns 75 today (Oct. 30).

To mark the occasion, he tweeted a poetic note of thanks to fans while celebrating the years he’s put in.

For 10 of those 75 years — and 11 seasons, between 1974 and 1984 — he played Arthur Fonzarelli, a.k.a. The Fonz, on the ABC sitcom Happy Days. And for the 36 years since, he has lived with the legacy as the coolest character ever to wear a leather jacket (an item of apparel so pop culturally significant, it now sits in the Smithsonian in Washington D.C.).

You might expect an actor who’s been identified for most of his life by a single character to be sick of that guy. But Winkler still answers the call of cool when the need arises. And when your signature character is named by TV Guide as Number 4 on its list of the 50 Greatest TV characters of all time, why not put that cachet to use?

Last Sunday, he returned to the role of Fonzie, performing a virtual table read from Season 3 of the series with erstwhile co-stars Ron Howard (Richie Cunningham), Donnie Most (Ralph Malph) and Anson Williams (Potsie Weber). The event was a fundraiser for the Democratic Party of Wisconsin, the state where Happy Days took place.

I’ll admit to having seen virtually every episode back in the day, but the best Fonz performance I never saw took place in a theatre studio in Burbank in 2006. The late show creator Garry Marshall told me then about his preparations for a touring Happy Days musical. That included taking Winkler up on his offer to coach the wannabe Fonzies — a mental image that made me laugh.

“Is there a special technique for giving the thumbs up and saying, ‘Heyyyy!’” I asked.

“Absolutely,” Marshall said. “Some of these guys, they can sing, but they don’t bring enough of the tough. There is only one Fonzie after all.”

The irony is that there was almost no Fonzie at all. The character was a minor one in the first season in 1974. The show was to be essentially a spin-off of George Lucas’s American Graffiti, with the casting of that movie’s star, Ron Howard, as the series’ boy-next-door.

But the token tough guy (Winkler had already played a street kid in a leather jacket in the movie The Lords of Flatbush, with Sylvester Stallone and Perry King) ended up getting all the attention from audiences. By season three, the Fonz was clearly the star of the show, with studio audience applause to match.

This was despite early efforts made to soften his edge. For much of the first season, he wears a windbreaker. When Marshall insisted on the leather jacket, the network decided it should be brown instead of the more menacing black.

But the jacket stayed on, even when he infamously “jumped the shark,” waterskiing while the gang was in Hollywood. (Fun fact: Winkler could not actually drive a motorcycle, but was an excellent water skier).

Fonzie’s charisma, as well, could not be stopped. For a generation, he represented “cool,” weaponized to defend the good guys. If the gang The Dragons or the evil Malachi Brothers threatened his friends, he’d stare them down until fear made them turn tail. On more serious issues like race and civil rights (a passion for Winkler in real life), the Fonz was there. He was the lone hold-out juror in an episode inspired by Twelve Angry Men, setting a wrongly accused young black man free. In another episode, he attempted to use the power of cool against racism when the kids at Arnold’s boycotted Richie’s band after he hired a black drummer named Sticks (John Bailey). Spoiler alert: it didn’t work.

It was earnest and silly, but solid in its moral certainty.

It’s noteworthy that three main cast-members — Winkler, Williams and, of course, Ron Howard — turned to work behind the camera after Happy Days ended, deeming the images they’d left behind as too powerful to overcome. And as early as 1978, Winkler turned down the role of Danny Zuko in Grease because it was too Fonz-like (a decision he has since admitted was a mistake).

In fact, two years before hanging up his leather jacket — and perhaps in anticipation of a fallow period as an actor — Winkler cut his directorial teeth on an episode of Joanie Loves Chachi (one of three successful Happy Days spin-offs, alongside Laverne and Shirley and Mork and Mindy) and went on to a prolific TV producing career (both incarnations of MacGyver, Dead Man’s Gun, Sabrina the Teenaged Witch, Unexplained Mysteries, Biography and the ABC Afterschool Specials).

Winkler has also been a good sport making fun of himself. In an episode of King of the Hill, he plays himself, the uncaring new Hollywood owner of an estate in Montana that blocks the cattle drive of Peggy Hill’s rancher mom.

For more than a dozen years post-Happy Days, Winkler would continue to take small roles. And when he couldn’t get them, he’d sometimes cast himself in shows he produced (like MacGyver).

But by the turn of the century, viewers rediscovered Winkler’s funny side, in Adam Sandler films (Little Nicky and The Waterboy) as well when he played Barry Zuckerkorn, the Bluth family’s inept attorney through 33 episodes of Arrested Development beginning in 2003.

And, in a triumph of karma, Winkler finally won his first-ever Emmy in 2018 for his role as acting teacher Gene Cousineau opposite Bill Hader in the acclaimed HBO series Barry.

Meanwhile, Winkler’s enjoyed “happy days” away from the spotlight as well. For 42 years, the New York native has been married to his wife Stacey (both are active in children’s charities). They have two grown children Zoe and Max (Winkler is also godfather to Ron Howard’s daughter Dallas Bryce Howard).

“The Fonz was the Yin to my Yang,” he is quoted as saying on IMDB. “He was everything I wanted to be, because there was nothing cool about me growing up.”

And after winning that first-ever Emmy in 2018, he told Good Morning America, “At school, I was a failure in almost everything except lunch. And I would dream of being somebody… I’m having a chain made to wear that trophy around my neck.”

Catching Up With … Marion Ross from Happy Days

Catching Up With … Donny Most From Happy Days