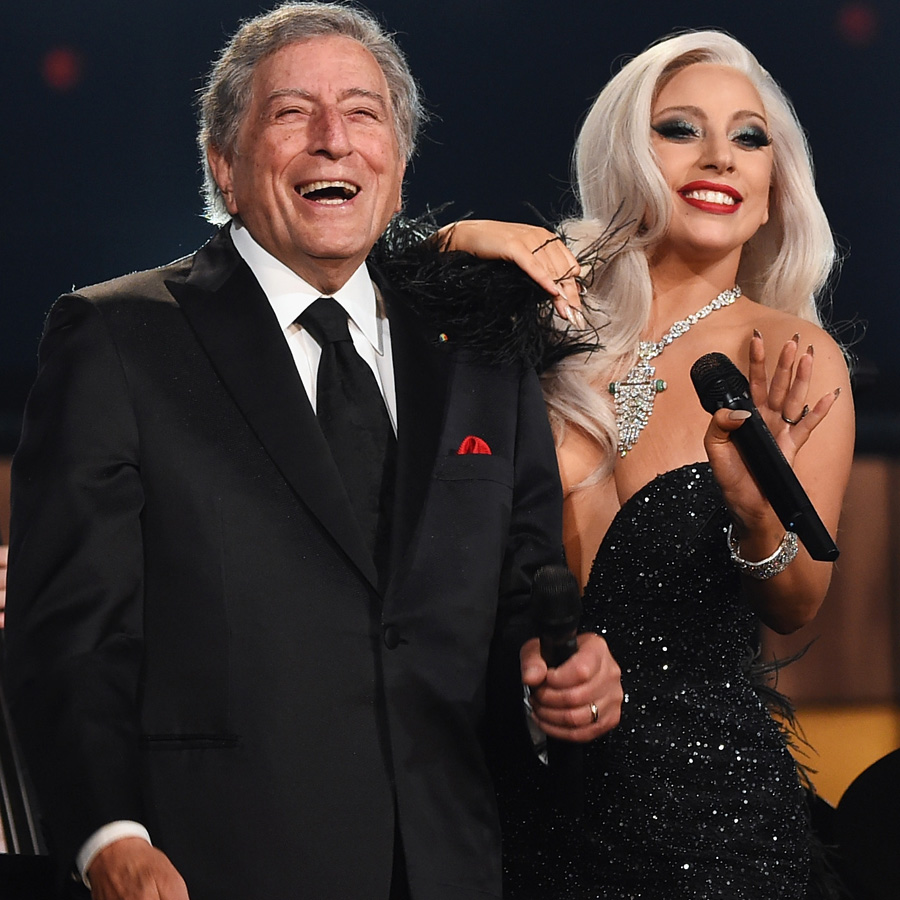 Tony Bennett and Lady Gaga, seen here at the 2015 Grammy Awards — where their album, 'Cheek to Cheek,' won the award for Best Traditional Pop Vocal Album — are reuniting for a follow-up disc and pair of shows at Radio City Music Hall to mark Bennett's 95th birthday in August. Photo: Larry Busacca / Getty Images for NARAS

Tony Bennett and Lady Gaga will join forces one last time for a pair of shows at New York’s Radio City Music Hall, reps for the two singers announced Monday.

One Last Time: An Evening With Tony Bennett and Lady Gaga will kick off on Bennett’s 95th birthday on Aug. 3 followed by the second and final show on Aug. 5. Bennett will also release his second album with Gaga later this year, a follow-up to their chart-topping, Grammy-winning 2014 disc Cheek to Cheek. The duo toured in support of Cheek to Cheek, and performed at Radio City Music Hall in 2015.

That album also made Bennett, at 88, the oldest artist to score a No. 1 disc ever, breaking his own record — which he set in 2011 with Duets II, at age 85. The upcoming follow-up to Cheek to Cheek could see Bennett break his own record for a second time. Duets II also marked the first No. 1 album of Bennett’s career.

The initial block of tickets for the One Last Time: An Evening With Tony Bennett and Lady Gaga shows will be made available to Citi card members via Livenation.com at 10 a.m. EDT on Wednesday, with general tickets going on sale the next day at the same time.

“We couldn’t be prouder to host such a special engagement with two of the most iconic entertainers of our time,” said Darren Pfeffer, executive VP of live at Madison Square Garden Entertainment. “Both Tony Bennett and Lady Gaga are synonymous with New York City, making the great stage at Radio City Music Hall the perfect place to honour their decade long friendship and celebrate Mr. Bennett’s 95th birthday.”

Reps say the Tony Bennett Quartet and the Brian Newman Quintet will be joined by a big band and orchestra conducted by Michael Bearden for the two shows.

Bennett and Gaga last performed together when the legendary crooner appeared as a surprise guest at the opening night of Gaga’s residency in Las Vegas, in January 2019.

In February of this year, Bennett’s family revealed that the 94-year-old was diagnosed with Alzheimer’s disease in 2016, though a profile by AARP noted that he’s “so far been spared the disorientation that can prompt patients to wander from home, as well as the episodes of terror, rage or depression that can accompany Alzheimer’s frightening detachment from reality.”

And while Bennett has continued to perform since his diagnosis, the upcoming pair of shows may mark his final appearances on stage. The AARP story noted that Bennett struggled with effects of Alzheimer’s during the recording sessions for their upcoming album, bringing Gaga to tears at one point.

The difficulty Bennett experienced making the album, and his inability to participate in press surrounding the project, contributed to the family’s decision to go public with his diagnosis.

“I wanted to check with [Lady Gaga] to make sure she was cool,” Bennett’s son, Danny, told AARP in the same story. “She watches his back all the time. She was like, ‘Absolutely, it’s just another gift that he can give to the world.'”

For Gaga, the 2014 collaboration with Bennett was the breath of fresh air she needed in a music industry with which she had become disillusioned.

“I tell Tony every day that he saved my life,” said a teary-eyed Gaga, in a 2014 interview, alongside Bennett, with Parade magazine. “I’m not going to say any names, but people get irrational when it comes to ­money — with how they treat you, with what they expect from you. But if you help an artist, it doesn’t give you the right, once the artist is big, to take advantage of them. I was so sad. I couldn’t sleep. I felt dead. And then I spent a lot of time with Tony. He wanted nothing but my friendship and my voice.”

Bennett, who first worked with Gaga on a cover of “The Lady Is a Tramp” in 2011, met the pop star backstage at a benefit concert.

“The first thing I said was, ‘Let’s do an album together.’ And she said, ‘Okay.’ That quick,” Bennett said in the same Parade interview. “I just love what she did on this album. She’s up there with Ella Fitzgerald, who was the greatest singer in the world.”

According to Gaga, Bennett once told her “I’ve ­never once in my career not wanted to do this.”

Since his diagnosis, that love for his craft has taken on new significance. Bennett’s neurologist, Gayatri Devi said in the AARP story that performing had slowed the progression of the singer’s Alzheimer’s.

“It kept him on his toes and also stimulated his brain in a significant way,” Devi said. ” He is doing so many things, at 94, that many people without dementia cannot do. He really is the symbol of hope for someone with a cognitive disorder.”