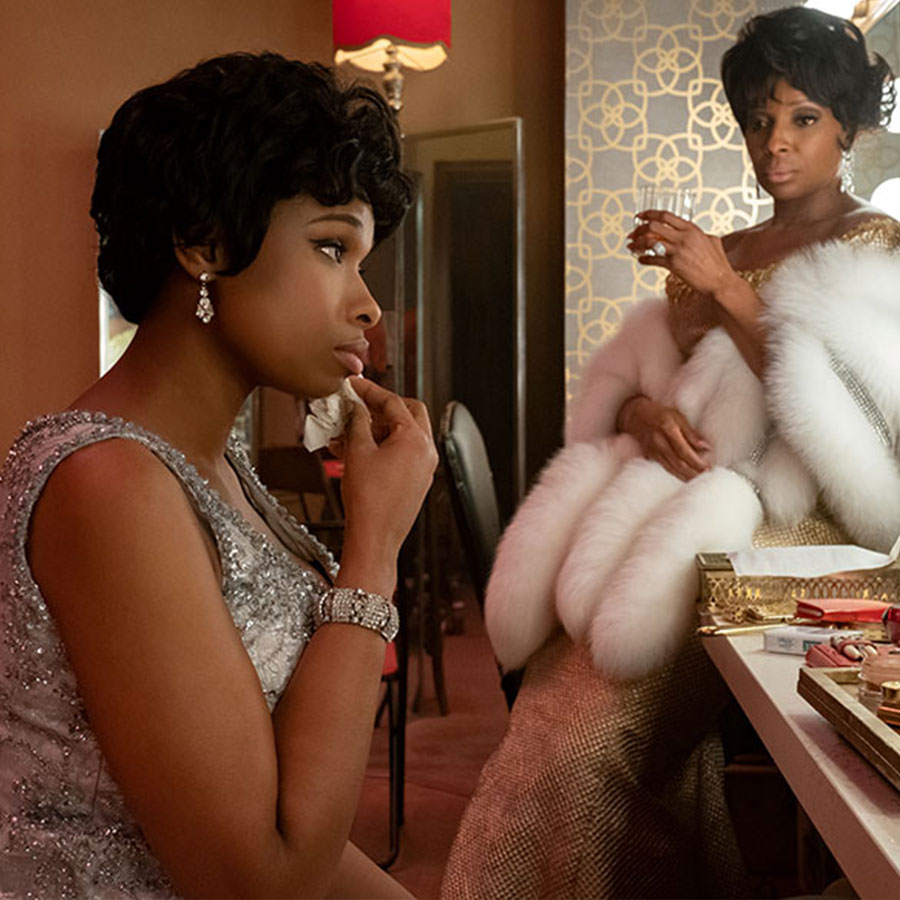 Jennifer Hudson as Aretha Franklin and Mary J. Blige as Dinah Washington in a scene from the film 'Respect.' Hudson is an inspiring choice to play Franklin, though ultimately the film doesn't do the Queen of Soul justice. Photo: Quantrell D. Colbert © 2021 Metro-Goldwyn-Mayer Pictures Inc.

Early in Respect — the new biopic about Aretha Franklin that landed in theatres on Friday — the singer’s father (played by Forest Whitaker) gets 10-year-old “Ree” out of bed late at night to wow his party guests with her vocal chops. The rousing performance is a cliché but promising choice that suggests the movie might explore how Franklin comes alive when she’s making music.

Of course, Tony and Grammy-winner Cynthia Erivo’s powerhouse turn as the Queen of Soul in the March release of the miniseries Genius: Aretha — part of National Geographic’s Emmy-winning Genius series — already covered that ground. But, due to pandemic delays, Franklin, who died in 2018 at age 76, gets two biopic treatments within six months. And while her talent merits close analysis, neither treatment does her justice.

Erivo’s interpretation — an 8-episode, a 392-minute arc — will inevitably invite comparison to Jennifer Hudson’s 145-minute portrayal of Franklin in Respect. The Genius anthology series (which previously chronicled the lives of Picasso and Einstein) had the endorsement of the Franklin estate but not the Franklin family. Meanwhile, Jennifer Hudson, 39, was chosen for the role in Respect by the Queen of Soul herself.

“I think she saw something in me … I would not have been able to go as deep as I did to tell the story in an honest way without my own life experiences,” Hudson, the one-time American Idol contestant who made her Academy Award-winning debut in Dreamgirls 15 years ago, told CNN of the long-gestating project.

In real life, Franklin experienced her breakout success around the age of 25 with the 1967 release of the tunes “Respect,” “(You Make Me Feel Like) A Natural Woman” and “I Never Loved a Man (The Way I Love You).” Hudson was 25 when Dreamgirls hit theatres in 2006. Both also experienced the abrupt loss of their mothers.

In the film, Hudson portrays Franklin from her teens through her rise to stardom in her 20s. She, however, neither looks nor sounds like Franklin, her friend and mentor from 2007 until her death from pancreatic cancer.

Respect acknowledges Franklin’s traumatic experience of loss (her mother died when she was only 10) and of domestic and sexual abuse (her two first children, the first born when she was just 12, were the product of childhood rape she seldom discussed). These details are handled with care, but also sidestepped in favour of long musical scenes — to the point of being vague in the rushed and often confusing timeline.

That childhood trauma was likewise seemingly repressed, with Franklin’s raw pain finding its only outlet in singing.

“She does not seem to be performing so much as bearing witness to a reality so simple and compelling that she could not possibly fake it,” is how one critic, in 1968, characterized her otherworldly gift for touching the soul through song.

Yet instead of that, Respect dwells on the demons (like alcoholism) produced by unresolved trauma and on escaping various tyrannical men — of Franklin going from a controlling patriarch who doesn’t quite grasp the potential of her talent (he thinks of her as “a Black Judy Garland”) to her abusive first husband Ted White (played by Marlon Wayans). At one point in the movie, Franklin — who, in 1968, became the first African-American entertainer to grace the cover of Time magazine — is confronted with that same article, which detailed how White roughed her up in public (in a hotel lobby).

Respect dutifully remounts iconic moments and historic musical performances with more than 80 wardrobe changes from costume designer Clint Ramos (the wardrobe is currently on exhibition in Detroit). It mostly plods along reverentially, broadly hitting its chronological marks and the occasional high note before it ends, in 1972, just short of her 30th birthday.

The finale attempts to recreate the electrifying church recording of Franklin’s blockbuster live gospel album Amazing Grace (surreptitiously attended by Rolling Stones Mick Jagger and Charlie Watts, who were in Los Angeles recording their gospel-influenced Exile on Main St. at the time). The footage of the live performance of Amazing Grace — filmed by Oscar-winning director Sydney Pollack and finally released in 2018 — now also stands as one of the great concert documentaries.

One of the most memorable scenes in Respect has Franklin and her sisters reworking Otis Redding’s minor hit “Respect” into what would become her signature song — thereby giving a man’s lament new meaning as an empowering female anthem — and it fits tidily into the story arc.

The movie, though, is at its best at times like these, when it parses the nature of Franklin’s considerable musical instincts — an innate talent further honed by the childhood tutelage of the ‘king of gospel’ Reverend James Cleveland (played here by Titus Burgess). And seeing Hudson recreate Franklin’s breakthrough in finding her sound in 1967 as she builds her own song arrangement with the session musicians at Muscle Schoals, the humble FAME music studio that turned the small Alabama town into a fabled recording hub, is thrilling to watch.

After two-and-a-half hours of broad recreation, however, Franklin remains inscrutable. She was a complicated woman — as her various handwritten wills suggest — and was also famously private about her personal life (only after her death, for example, was it revealed that her eldest son Clarence has unspecified special needs and requires a guardian).

Hudson’s powerful voice, however, is never quite as touching and soul-stirring as the legendary artist she portrays. It’s a fact brought home in the end credits, during which information about Franklin’s later accomplishments is accompanied by footage of the real-life Franklin herself, in diamonds and furs, performing her seminal hit “You Make Me Feel (Like a Natural Woman)” at the Kennedy Center Honors tribute to Carole King, who wrote it. She begins sedately enough, at the piano, then gains momentum and sashays to centre stage, where she shrugs off her mink. It’s a soaring and seemingly effortless performance. You get chills.

It instantly erases the memory of Hudson’s restrained performance by reminding us how the Queen of Soul simultaneously imbued heartache, resilience, and hope into every note.

“There are three qualities that make a great singer — head, heart and throat,” is how former producer Jerry Wexler describes the rare combination in his autobiography. He adds, “The head is intelligence, the phrasing. The heart is the emotionality that feeds the flames. The throat is the chops, the voice. Ray Charles certainly has the first two. Aretha, though, like Sam Cooke, has all three.”

Respect is exclusively in theatres now.