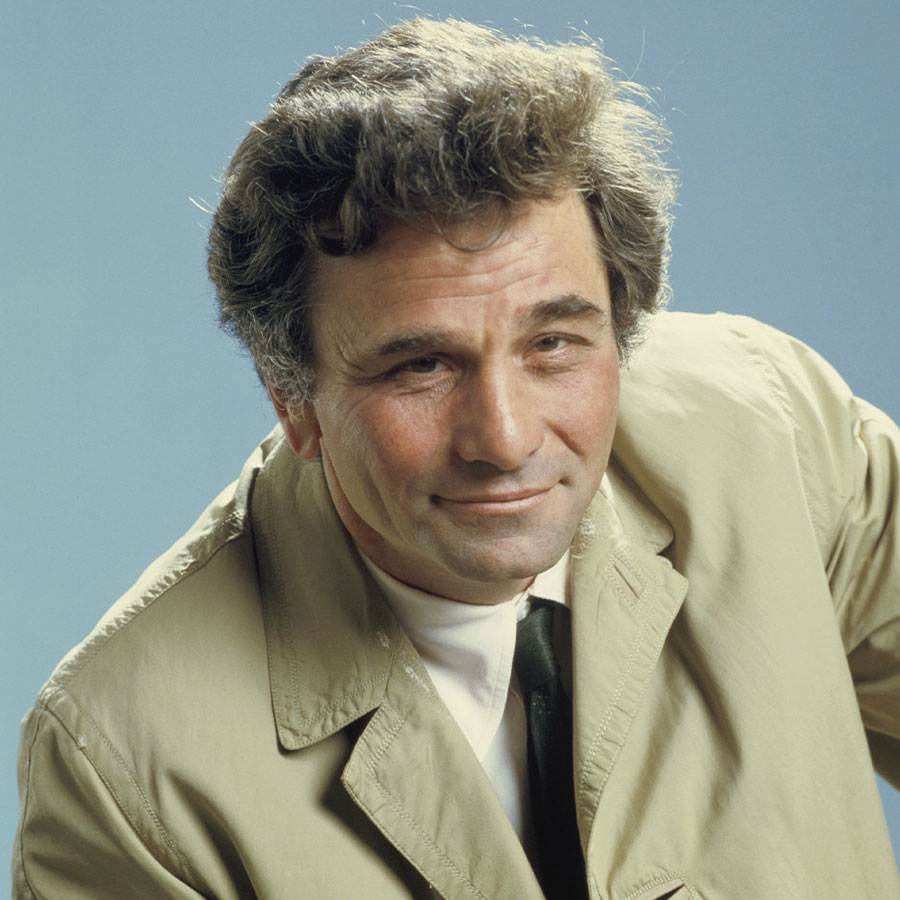 This week marks the 50th anniversary of Columbo’s regular series debut, and the establishing of a fandom that is still going strong today. Photo: NBCU Photo Bank/GettyImages

During the various lockdown waves of the ongoing pandemic, it felt like everyone was watching Columbo. The 1970s series about a Los Angeles homicide detective (played by Peter Falk) airs regularly in Canada on VisionTV (a ZoomerMedia property) and on Peacock (NBC’s streaming service) in the U.S. and, as a result of the reruns, many people discovered the pleasures of the perennially underestimated gumshoe catching variously smug, arrogant, and impatient criminals during COVID lockdown. The unlikely quarantine hit and its comfort-food qualities have garnered recent praise from GQ to the New York Times, while online fan clubs have spread to social media.

These days the lieutenant stars in adult colouring books (yes, really) and a cookbook called Cooking with Columbo (by Silver Screen Suppers blogger Jenny Hammerton). In 2017, he was revealed as an inspiration to Canada’s own Yannick Bisson, star of Murdoch Mysteries (as discussed in this Zoomer story). Columbo even has his own YouTube channel.

In addition to the show’s pandemic renaissance, this week — Sept. 15 specifically — marks the 50th anniversary of Columbo’s regular series debut on NBC in 1971. As such, we took a look at what makes this vintage television series an enduring cultural phenomenon.

Whodunit? Who cares! The pleasure of this talky series, with its counterintuitive lack of traditional suspense, is in the cat-and-mouse of how Columbo will prove guilt. This form of inverted detective story, also called a ‘howcatchem,’ is a method of storytelling credited to English writer named R. Austin Freeman in his Dr. Thorndyke short stories from 1912. Dial M for Murder is a prime example. In most of the 69 television episodes/ TV movies produced during Columbo’s 10-season run — which was split between 1971-1978, and then variously from 1989 through 2003 — the viewer knows the murderer’s identity from the first scene, an upfront format that influenced contemporary series’ like Killing Eve and Luther.

The blue-collar detective was the brainchild of childhood best friends Richard Levinson and William Link, according to their memoir of prime time, Stay Tuned (the duo later went on to create Murder, She Wrote). The Chevy Mystery Show’s original 1960 television adaptation of Levinson and Link’s play, Enough Rope, starred Bert Freed. Prior to Falk, Joseph Cotton, as well as Oscar-winner Thomas Mitchell, also, variously, played the character on stage.

When the decision was made to make Prescription Murder into a TV movie in 1968, Lee J. Cobb and Bing Crosby were the producers’ top picks.

“We wanted Bing Crosby, if anyone can believe it,” Link said in an interview for the Emmys Television Academy. “We saw the pipe instead of the cigar.”

Then New Hollywood character actor Peter Falk called (he had gotten a copy of the script). “He said ‘I’d kill to play that cop.’ He didn’t screen test, he was very New York,” Link explained.

“I’m just another cop” is how Columbo introduces himself, but don’t be fooled by the ashy cigar. Appearances can be deceiving. (To those paying attention, the first clue that all is not as it seems may be that Columbo lives in sunny California but never removes his raincoat or puts the top down on his faded Peugeot convertible.)

In “Ransom for a Dead Man,” the original series pilot starring Lee Grant as the murderer that aired in March of 1971, the show didn’t yet have the signature yellow opening titles (by famed designer Wayne Fitzgerald), but Falk’s rumpled shtick technique is already on full display. Grant’s murderess recognized the lieutenant’s bag of tricks and calls him out: “the humility, the seeming absent-minded, the homey anecdotes about the family, wife, you know … but it’s always the jugular that he’s after.”

Columbo “Murder By the Book” aired September 15, 1971 and is considered the first regular episode. It features a setup about one half of a crime-writing pair — here, a pair of co-authors inspired by the real-life cousins Frederic Dannay and Manfred Bennington Lee, who wrote detective novels together under the pseudonym Ellery Queen — getting rid of the other. TV Guide ranked that episode, directed by a young Steven Spielberg, at #16 on its list of “100 Greatest Episodes of All Time.”

“I learned so much from (William Link) about the true anatomy of a plot,” Spielberg said in a statement after Link’s death last December. “I caught a huge break when Bill and Dick trusted a young, inexperienced director to do the first episode of Columbo. That job helped convince the studio to let me do Duel.”

That history also generated one of the series’ best in-jokes: the boy-genius in 1974’s “Mind Over Mayhem” is named ‘Stevie Spelberg.’

“They like to see the little guy get the big guy,” Falk himself opined of the show’s popularity during a 1977 appearance on The Tonight Show. “They like Columbo because he’s unpretentious. They like him because he’s polite. I think he’s a polite man, a decent man.”

It’s Falk who shaped the character into a disheveled, seemingly bumbling Inspector Clouseau and the effect is heightened by his wily masquerade in a drab pinkish-brown suit, scuffed shoes, and beige raincoat. “That coat, that coat,” a nun at a soup kitchen says of the famous garment in one episode, mistaking him for an impoverished patron and offering to find him something better in the donations box. In another Anne Baxter takes him to legendary costume designer Edith Head’s department on the backlot and attempts to spruce up his necktie.

Along with The Rockford Files, Columbo remains my favourite use of metropolitan Los Angeles as a character (as Bosch also does). While many scenes were filmed on backlot sound stages, in the course of his investigations the lieutenant also criss-crosses real locations from Malibu and Bel Air to Big Sur and Santa Barbara. The very first episode features the famous hilltop swimming pool and view at Stahl House, now a historic site; there are detours to Barney’s Beanery on Santa Monica Blvd. and the audience gets to venture onto the piers and inside luxury estates — like the extensive use, inside and out, of Harold Lloyd’s Greenacres mansion as well as the 1920s Moroccan-style Casa Blanca poolhouse. Columbo is also one of the few visual records of Hollywood movie pioneer Frances Marion’s extraordinary estate Enchanted Hill, used as the house of the villain in two episodes — “Identity Crisis” and “Fade in to Murder.” The Beverly Hills landmark was razed by Microsoft co-founder Paul Allen in 1997 and remains a vacant site today, but lives forever onscreen. Should enthusiastic fans want to recreate the Columbo series map, David Koenig’s new book Shooting Columbo (out Sept. 15) comes with a digital pamphlet called “Murderous Mansions,” a complete tour of shooting locations.

Famous friends and actors often co-starred (and occasionally directed) on the series. They ranged from Anne Baxter as a Norma Desmond-type fading actress (“Requiem for a Falling Star”) and William Shatner playing an actor famous for being a TV gumshoe (“Fade in to Murder”) to Ida Lupino and Johnny Cash (“Swan Song”). There was Myrna Loy and Blythe Danner (at the time expectant with daughter Gwyneth Paltrow), as well as Patrick McGoohan and Jack Cassidy’s repeat visits.

One of my top episodes is “Try and Catch Me” with the diminutive Ruth Gordon (then 81!) as a wildly-bestselling Agatha Christie-type mystery writer with a vengeful plot, along with “Publish or Perish,” wherein crime legend Mickey Spillane himself is the victim (as a bestselling pulp writer, natch).

Robert Culp, Ray Milland, Janet Leigh — the list goes on and includes married filmmakers John Cassavetes and Gena Rowlands in “Étude in Black”. The obvious affection between both the characters and the actors who play them, coming on the heels of together having made A Woman Under the Influence (Cassavetes’s intense indie in which Falk and Rowlands play a volatile married couple) adds a fascinating dimension. Directorial alumni include Jonathan Demme, Hill Street Blues creator Steven Bochco, Nicholas Colasanto (Coach on Cheers), and Ben Gazzara.

Next to my superfan boxset (including Kate Mulgrew’s short-lived counterpart spinoff Mrs. Columbo from 1979), and avid readingof The Columbophile blog, my personal bookshelf devoted to the detective includes critic Mark Dawidziak’s casebook The Columbo Phile: A Casebook, originally written in the late 1980s before the series reboot. Recently reprinted to mark its 30th anniversary, it’s got episode recaps and is peppered with insights from the producers, writers, and guest stars.

The critical view is welcome when considering certain elements and shortcomings, as Dawidziak points out about “A Case of Immunity,” the episode singled out by the American-Arab Anti-Discrimination Committee for its oversimplified depictions of complicated political tensions and stereotyping.

Columbo Under Glass, by former Columbo fanzine writer Sheldon Catz, builds on that work with thematic essays and plot analysis — even charts of murder methods and motives. And for Shooting Columbo, David Koenig spent a decade in archives and original production notes. “Poring over the original studio materials was the highlight of the adventure. I also received a tremendous amount of invaluable insight from interviews, but my subjects could share only their side of the story, looking back up to 50 years later,” Koenig said in a recent interview with the Columbophile website. “The production reports, on the other hand, were not dimmed by memory or coloured by bias. They just reported the facts of exactly what happened on the set or at the story conference.”

There’s something for everyone, from the enthusiastic fan to the more scholarly inclined, with University of Glasgow film prof David Martin-Jones’ forthcoming Columbo: Paying Attention 24/7 out in November.

Columbo has taken in more than US$600 million in its lifetime of home video and worldwide syndication, a fact borne out in 2019 when the co-creators won the first phase of an ongoing US$135 million suit against Universal regarding contract profit claims. Yet we still don’t know the real first name of the wily detective with the unseen wife and countless relatives. When an answer in Canadian board game Trivial Pursuit once incorrectly identified him as Philip, fans pointed to the 1971 episode “Dead Weight,” where a prop badge he flashes bears the name Frank Columbo. That, too, was a red herring. When asked, the answer Falk always gave is that his first name is Lieutenant.

Nostalgia: “Just The Facts” on 6 of Your Favourite TV Cops

How To Revisit Classic Shows From The Golden Age of Radio