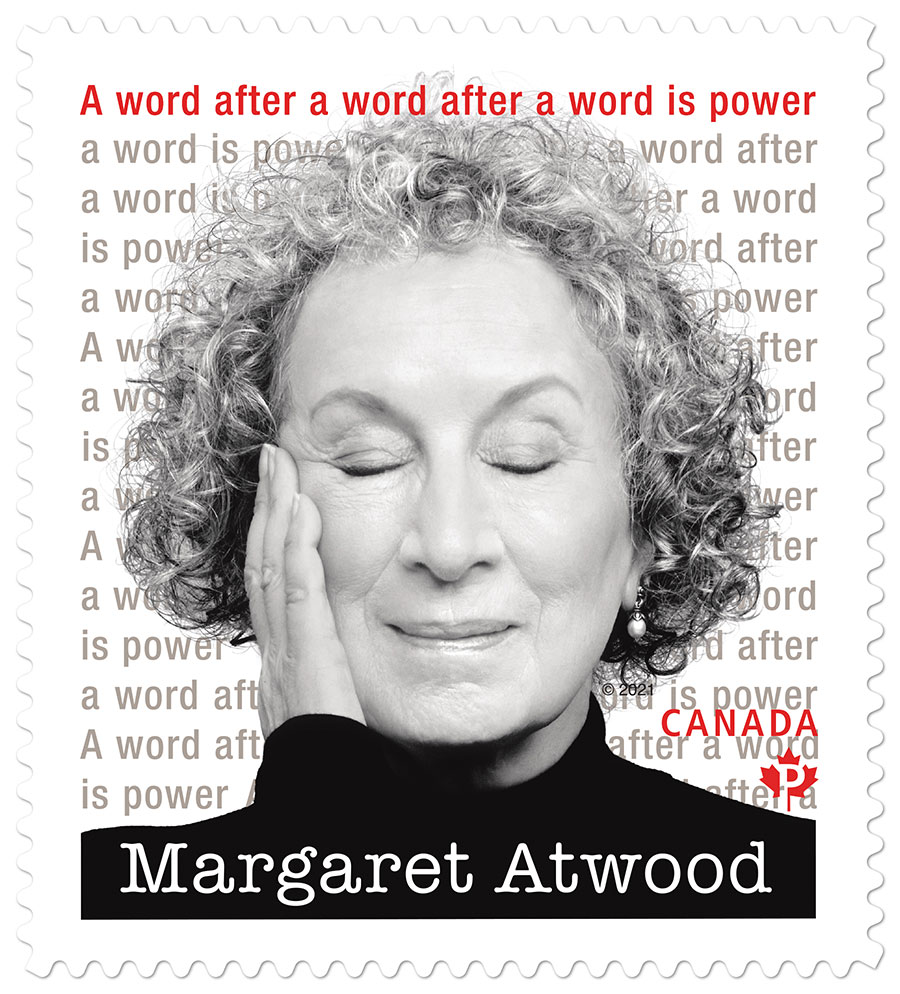 Canada Post unveiled a stamp honouring Margaret Atwood at the Toronto Reference Library on Thursday morning in recognition of her six decades of literary work.

“With more than 50 works to her credit, the Queen of CanLit has been writing for 60 years and has sold millions of books worldwide,” reads a story about the stamp in Canada Post Magazine. “Decade after decade, readers have found themselves captivated and challenged by the narratives she creates and the themes she so deftly mines, like truth, environmental degradation and, of course, power.”

Atwood, who turned 82 on Nov. 18, is featured on the stamp with her eyes closed and her right hand on her cheek in an image shot by photographer Ruven Afanador. The stamp, designed by Steven Slipp and printed by Lowe-Martin, includes the repeated phrase, “A word after a word is power” — a famous line from Atwood’s poem “Spelling” (1981), which Canada Post Magazine notes, “echoes her belief in the power of one’s voice.”

The cover of the first day of release stamp book features a 1975 sketch by Atwood titled “Neither fish nor flesh,” according to a press release.

“Being on a stamp is an unexpected honour. So unexpected, that it has already caused a rash of stamp envy in my peer group,” Atwood quipped in a speech at the event. She added that the first phone call she received, “was from a friend of my age — a thousand and two — who exclaimed with a shocked horror that was only partly jocular, ‘But you’re not even dead yet!’ To which the only possible reply is ‘How can you tell?’”

Atwood noted that many living people received stamps, from cartoonists and athletes to the Queen and Buffy Sainte-Marie — the latter of whom received her own stamp last week.

Those on hand for the unveiling included actress/writer/director Sarah Polley, who adapted Atwood’s Alias Grace into an acclaimed 2017 miniseries, as well as National Chair of The Word On The Street Canada Ceta Ramkhalawansingh and Canada Post President and CEO Doug Ettinger.

Click here for information on how to purchase the stamp.