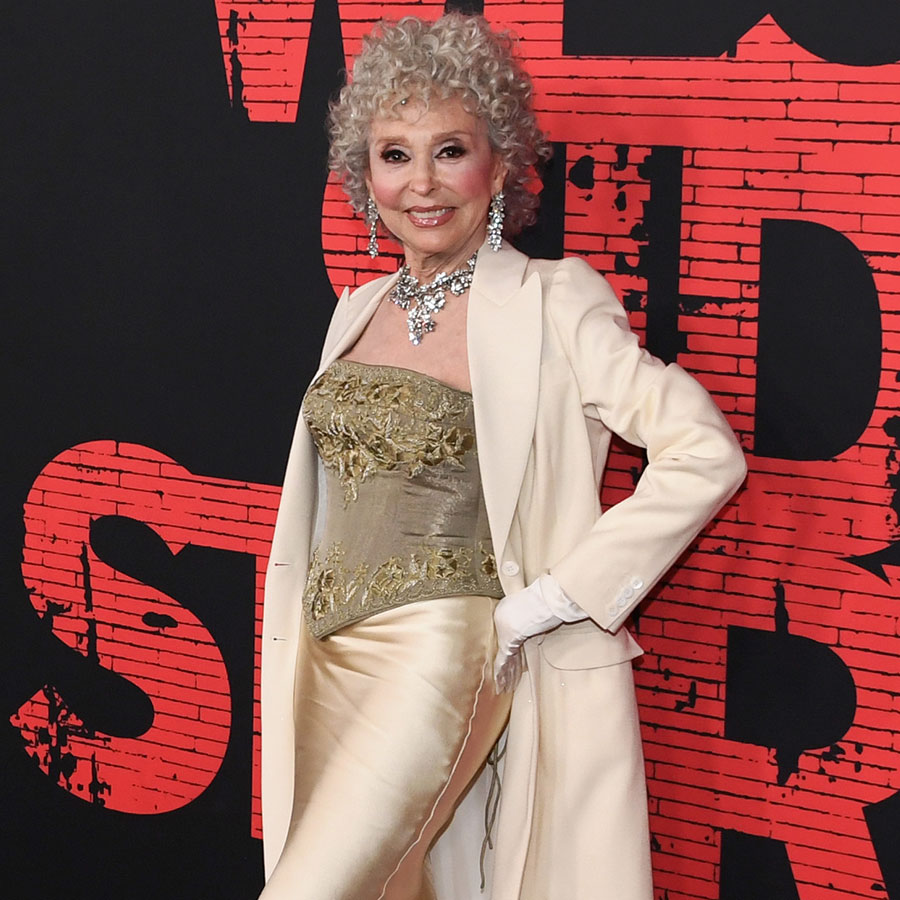 Rita Moreno, seen here at the Disney Studios' Los Angeles Premiere Of 'West Side Story,' is already generating Oscar-buzz for her role in the new adaptation of the musical — for which she won an Academy Award for Best Supporting Actress in 1962. Photo: Jon Kopaloff / WireImage / Getty Images

It’s not every actor who happens to be opening in the biggest Hollywood movie of the season the same weekend they become a nonagenarian. But that’s the case with living legend Rita Moreno, the pioneering Puerto Rican-born American actress whose 90th birthday on December 11 comes a day after the theatrical opening of West Side Story — Steven Spielberg’s 2021 film in which she co-stars, after winning an Academy Award for Best Supporting Actress for her performance in the 1961 film version.

Moreno has enjoyed a virtually unparalleled career on the big and small screens, on stage and as an activist.

Whether it’s releasing her first Spanish-language album Una Vez Mas at the age of 83, starring as feisty Cuban grandmother Lydia on legendary producer Norman Lear’s recent Netflix reboot of One Day at a Time, planning her annual themed birthday party at home in Northern California or bravely speaking her mind to a rapt audience, she remains one of a kind.

To celebrate her 90th, we take an appreciative look back at her legacy.

In 1962, Moreno became the first (and still only) Latina to win the Academy Award for Best Supporting Actress, for the musical West Side Story—about star-crossed lovers caught in the rivalry between the Jets and Sharks street gangs in 1957 New York City. Sixty years after that Oscar-winning role as proud Puerto Rican Anita, Moreno is one of the stars of Steven Spielberg’s new version of the musical, as well as one of its executive producers. She plays Valentina, a reimagined version of Doc (the shopkeeper in the original film) in a role screenwriter Tony Kushner created expressly for her.

She Speaks the Truth

In the new documentary Rita Moreno: Just a Girl Who Decided to Go For It (streaming on Netflix), we see just how frank and self-aware the performer is about her ups, downs, and relationships. She divulges, for instance, the damage her long on-and-off relationship with Marlon Brando did to her self-esteem (between suicide attempts and a botched abortion, it nearly killed her) and admits to profound ambivalence about her unhappy marriage to Lenny Gordon, a cardiologist, with whom she had daughter Fernanda.

Meanwhile, making the new version of West Side Story presented other challenges, like facing the realities of her age. “It wasn’t easy,” she admitted in a recent interview with Collider, of watching the new cast put their own spin on her beloved musical. “I’m not gonna say I wasn’t envious. That would be a bloody lie. I wished I could be that young again and do it again, but that wasn’t going to be.”

In both the recent documentary and the ABC News 20/20 special “Something’s Coming: West Side Story,” Moreno also admits that she nearly quit the 1961 West Side Story before rehearsals had even started over the original offensive lyrics in “America” that her character was meant to sing. The words might have been in character for Anita’s dismissive opinions, but they denigrated her Puerto Rico homeland. “And it felt awful. It felt horrible. And I thought, ‘I can’t do this. I can’t do this to my people.’ I got this close to not doing it.”

For decades Moreno has been an outspoken advocate for racial and gender equality, childhood education, abortion rights, immigrant families, relief for Puerto Rico and many other causes. She has garnered countless accolades both for her performance and her activism — including the Presidential Medal of Freedom, the National Medal of the Arts, and the Kennedy Centre Honors, America’s highest prize for lifetime achievement in the arts. “She’s still a leading lady of her era,” President Barack Obama said at the time, “a trailblazer with courage to break through barriers and forge new paths.”

She Blazed a Trail for the Generations After Her

Anika Aldamuy Denise put Moreno’s early career dilemma plainly in the recent children’s picture book A Girl Named Rosita. After years of teaching herself to speak perfect English, the aspiring actress, “must fake an all-purpose accent to play maidens, slaves, and Spanish spitfires, the only roles Hollywood will give to a Latina.”

Even after winning an Oscar in the Best Supporting Actress category, better roles didn’t materialize. So Moreno boycotted film acting from 1961 to 1968 due to the demeaning roles and worked on London and New York stages instead.

By not working in film she broke down doors at the time. As fellow actress Rosie Perez told Glamour,  “by standing for her beliefs and morals and integrity and saying, ‘I’m not just this one thing, she paid a heavy price for us.”

Moreno’s perseverance in her quest for non-stereotypical work and her outspoken refusal to accept anything less than dignified equality has inspired generations of Latinx performers. “You gave me hope, you gave me a reason to fight and to speak up, you gave me a voice,” Jane the Virgin star Gina Rodriguez said in her Kennedy Center Honors tribute.

She’s Not Just an EGOT: She’s a PEGOT

“Rita Moreno is thrilled, but Rosa Dolores Alverio from Humacao, Puerto Rico is UNDONE!” she said accepting the 1975 Tony for Best Actress in The Ritz.

Moreno’s character in the play (and subsequent movie) is a deliberately outrageous caricature of Latin types: “By playing Googie I am thumbing my nose at all those Hollywood writers responsible for lines like ‘You Yankee peeg, you rape my seester, I keel you!,’” she told the New York Times in 1975.

Not only is Moreno one of only about a dozen people to win all four major American performing awards — an Emmy, Grammy, Oscar, and Tony, the so-called EGOT — she’s one of just three entertainers (and the only Latinx performer) to have earned a Peabody as well. She dedicated that award to her mother, Rosa Maria, who worked as a sweatshop seamstress to pay for rent and dance lessons (with Paco Cansino, Rita Hayworth’s uncle) so that her daughter could follow her dreams.

She’s Can Do Anything

“Hey, you guys!” Moreno’s signature line on The Electric Company, the PBS children’s series she starred in alongside Morgan Freeman throughout the 1970s, is as iconic as Carol Burnett’s Tarzan yell. Her sultry and hilarious Emmy-winning duet on The Muppet Show with Animal (voiced and animated by Frank Oz) is one of the great comedy moments in television.

In a recurring guest role on The Rockford Files she’s compelling as Rita Capkovic, an old friend of James Garner’s Jim, and earned another Emmy. And her unglamorous role as Sister Pete, the prison psychologist on HBO’s Oz, unforgettably grounds the gritty series.

In early buzz for Spielberg’s West Side Story remake, critics already consider Moreno a frontrunner in the Best Supporting Actress race. Sixty years after the original musical and her historic win, a new nomination would break Katherine Hepburn and Henry Fonda’s respective records for the longest time span between first and last noms. We can’t wait to see what she’ll wear to the next ceremony.

She’s a Legend on the Red Carpet Too

“Oh, I think it has everything to do with genes,” Moreno said of how she’s remained so vital, when she talked to Zoomer about her life earlier this year (read our interview here). The new documentary about her life is subtitled “Just a Girl Who Decided to Go for It” and that goes for her red carpet outings too. More than 70 years of publicity and red carpet photos prove just how much Moreno relishes dressing up — at 56, in a dress giving Cher a backless run for her money at the 1987 Oscars, for example.

Among teens and twenty-somethings, she’s the elegant style star of the current West Side Story promotional blitz — one shimmering long-sleeved black gown in particular stands out as understated but ferociously chic from last month’s New York City premiere.

There’s a keen sense of play and enjoying fashion, too — for the Academy Awards in 2018, Moreno shopped her closet and opted to recycle the full-skirted gold medallion jacquard gown last seen at the 1962 Oscars ceremony of her groundbreaking win. It was only slightly modified from its last outing.

“It’s been hanging in my closet and I go and stroke it now and then,” she told People. At the Oscars with her daughter Fernanda as her date in April, she stunned in a strapless burgundy gown and velvet stole— as usual, having the most fun of all.

The red carpet photos reminded me of my one encounter with the legend. As a child devotee of The Electric Company and the Muppet Show, I’ll personally never forget the thrill of spending the evening salsa dancing alongside Moreno, then 73, at the 2003 Toronto Film Festival cast party for John Sayles’s drama The Casa De Los Babys.

She was the first one on the dance floor, naturally.

“This is the Most Empowering Time”: Jane Campion, 67, on Aging in Hollywood and Her New Film, “The Power of the Dog”