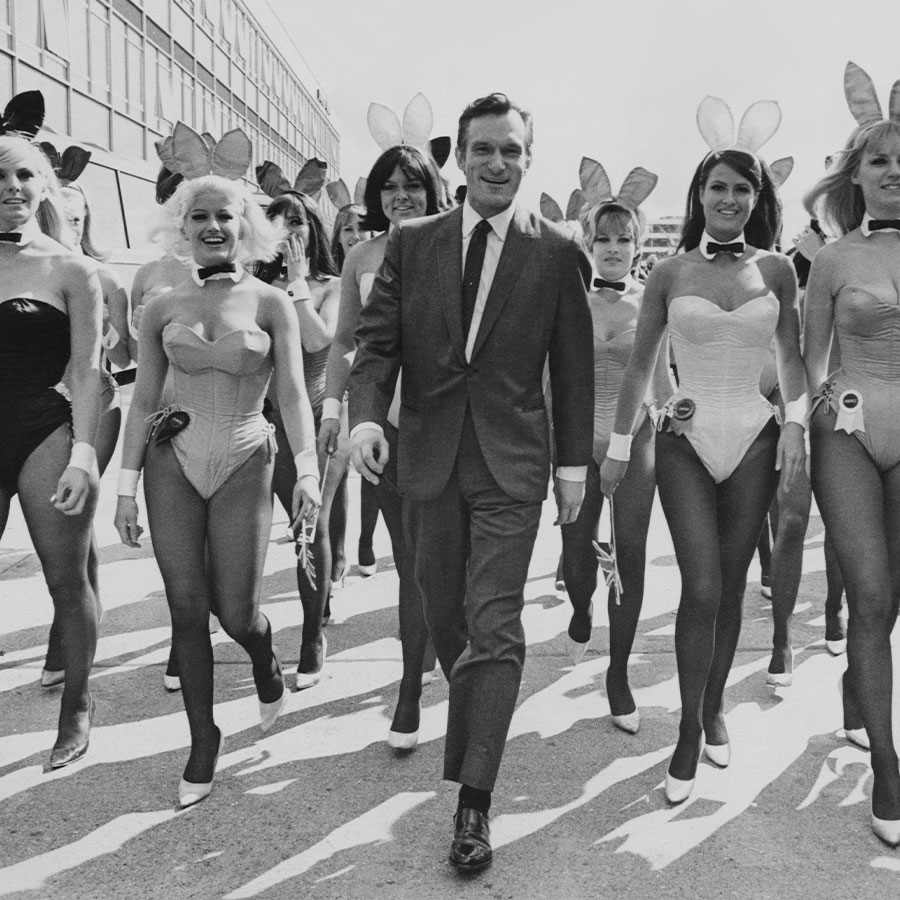 Playboy founder Hugh Hefner arrives at London Airport with an entourage of Playboy Bunnies in June 1966. The new A&E documentary series 'Secrets of Playboy' delves into the darker side of the brand's history and Hefner's conduct. Photo: Ted West/Central Press/Hulton Archive/Getty Images

On Monday night the new documentary series Secrets of Playboy debuted on A&E. The series aims to explore “the hidden truths behind the fable and philosophy of the Playboy empire through a modern-day lens including “delv[ing] into the complex world Hugh Hefner created and examines its far-reaching consequences on our culture’s view of power and sexuality.”

In a trailer for the series, model Holly Madison, Hefner’s girlfriend from 2001-2008, describes how she “broke under the pressure” of living with the brand’s founder while feeling as though she had to look like all the other women at his home. She outlines the verbal abuse and insults she says Hefner levied at her, including saying she looked “old, hard and cheap” after cutting her long blonde hair short.

She adds, “I remember there were times, probably within the first couple of years that I lived there, when I felt like I was just in this cycle of gross things and I didn’t know what to do.”

In another trailer, PJ Masten, who worked at a Playboy Club before becoming a “Bunny Mother” (a person who evaluates hopeful Playboy bunnies) in 1975, said  “Playboy was all about powerful men preying on beautiful young women.”

Of course, this is just the latest shot across the bow at the boomer-era institution that was once celebrated for championing sexual liberation but has, over time, faced accusations of creating the illusion of empowerment while fostering a misogynistic attitude toward women that sometimes led to abuse. The brand has also taken commercial and financial hits in recent years.

Ahead of the debut of Secrets of Playboy, we revisit our December 2021 feature that followed the announcement of rapper Cardi B as the brand’s first creative director in residence, which examined Playboy’s controversial history.

The year 1953 was one of great cultural change. Across the pond, England ushered in the modern era by crowning a new Queen — the first coronation to be televised — while, in North America, I Love Lucy reigned supreme over the television landscape.

However, amidst the prudishness of post-war America, even someone of Lucille Ball’s stature couldn’t get away with using the word “pregnant” on an episode of I Love Lucy. The show’s network, CBS, reportedly deemed the word too “vulgar” — which is not surprising given television spouses weren’t even allowed to be shown sleeping in the same bed.

And so it was into this uber-conservative culture that a young Hugh Hefner launched the first issue of Playboy magazine with a nude Marilyn Monroe as the centrefold.

Sixty-eight years later, the Playboy brand finds itself in a state of flux, attempting to gain a foothold in a culture for which it no longer serves as the destination for edgy content, or even photos of nude women. (And for those who claim to “read it for the articles,” it’s no longer perceived as a beacon of free expression and quality journalism.)

In 2015 the magazine tried to lure more advertisers and eyeballs by ceasing to publish nude images. That experiment only lasted two years.

Last year Playboy ceased printing its physical magazine for the first time in more than 60 years — a decision that the publication essentially admitted was inevitable anyway, and merely expedited by the pandemic. At the end, Business Insider noted that sales of the magazine “shrunk to less than four per cent of what they used to be.”

As well, in the last two decades, attempts to revive the nostalgia of the Playboy Clubs that thrived in the 1960s and ’70s — gentlemen’s clubs where beautiful women dressed as Playboy bunnies served up cocktails and eye candy — fell flat. In 2018, a newly opened Playboy Club in New York lasted only a year before shuttering.

And now we’re in the midst of the latest Playboy reboot attempt — a digital renaissance with chart-topping rapper Cardi B as the brand’s first creative director in residence.

Centerfold, according to Forbes, is Playboy’s answer to OnlyFans, the popular subscription-based site that allows content creators to connect directly with fans who pay to access their work.

“Joining the @playboy family is a dream and I know yall are going to love what we put together,” Cardi B posted in her Instagram announcement about the collaboration. “We’re going to have soooooo much fun.”

As a brand and as a business, Playboy needs Cardi B more than the rapper — who followed up her 2018 debut album, Invasion of Privacy (which went triple platinum) with a series of chart-topping singles — needs them.

In addition, Cardi B’s massive 2020 single “WAP” (the acronym stands for Wet Ass P*ssy) featuring Megan Thee Stallion, was hailed not only for its musical merits but also for its positive depiction of female sexuality and desire.

But, predictably, the song also drew backlash for the graphic language and descriptions of sexual acts. Some of that criticism came from the same politicos and media pundits who support the last U.S. president, who was also recorded using the “p-word” — while bragging about sexually assaulting women and claiming: “And when you’re a star, they let you do it, you can do anything … grab them by the p*ssy.”

The disingenuous pearl-clutching was on full display, to be sure. And, no doubt, the folks at Playboy likely believe that Cardi B’s envelope-pushing, sexuality-embracing, forward-thinking attitudes mirror that of their own brand. But they’d be wrong.

The Playboy Illusion of Empowerment

Playboy, for all of the back patting it receives for defending the Civil Rights movement and the LGBTQ community, among other progressive ideas, in decades past, has a tenuous claim when it comes to empowering women.

“Playboy pushed the envelope on nudity and obscenity, sex and desire. But it did so within the narrowest of frames: men’s views, experiences, interests, biases and desires,” lawyer and writer Jill Filipovic wrote in Time magazine. “What Hefner and Playboy never did was present women as human, or consider us anything like men. Hefner made female sex objects more relatable and accessible … but this wasn’t so much an elevation as a downward shift: social permission for men to look at all women through the zipper in their jeans, and not even bother to pretend it was otherwise.”

She added that, while Hefner was pro-abortion and contraception, it was, “because those things benefited men’s sex lives, not because they were necessary components of female freedom.”

Gloria Steinem, meanwhile, famously went undercover as a Playboy bunny at a Playboy Club and documented the exploitative, sexist and, yes, invasive — potential bunnies were subject to an “internal physical” by a Playboy-approved doctor — culture to which the women working for the clubs were exposed.

And then there’s Hefner’s own lifestyle — wandering from mansion to grotto to bedroom with a bevy of beauties decades younger than himself hanging off his silk robe, which became synonymous with the Playboy brand.

“[Hugh Hefner’s] idea of sexual liberation remained one in which women were objects with the purpose of providing pleasure to men,” Dr. Thekla Morgenroth told the BBC in 2017. “This was equally reflected in how he portrayed his lifestyle — in which women functioned as accessories and status symbols, not as equal partners. He did not empower women. He gave them just one more restrictive role to choose from.”

Hefner has also been accused of controlling and abusive behaviour by some of the women he kept at his mansion, while the Playboy empire itself was built on a questionable foundation of consent.

When Hefner launched Playboy with nude photos of Marilyn Monroe, he did so without her knowledge. In 1949, a young Monroe allowed photographer Tom Kelley to shoot her nude for a calendar when she was struggling for work. She, however, was reportedly embarrassed by the photos and even asked Kelley to “promise me that you will take the pictures so that I wouldn’t be recognizable in them.”

However, by the time Playboy launched in 1953, Monroe was a legitimate Hollywood star (Gentlemen Prefer Blondes opened that year). Hefner, however, paid Kelley for the rights to use the photos and, while not legally obligated to get Monroe’s permission, he ran them without so much as asking how she felt about it.

“While it all worked out alright for Monroe in the end, it doesn’t change the fact that for a horrible moment in time, she had absolutely no control over her own naked images,” journalist Megan C. Hills wrote in Marie Claire in 2017. “Yes, she may have consented to a photoshoot with a photographer but she didn’t consent to have her images circulated to hundreds of thousands of people. It’s a nightmare that many women continue to be subjected to today, with reports of leaks and revenge porn (which has officially been listed a crime in the U.K.) on the rise.”

Sixty-eight years have passed between that dubious first Marilyn Monroe print centerfold and the announcement of Cardi B launching Playboy’s digital platform, Centerfold. And perhaps it’s fitting that, with Hefner long gone (he died in 2017), a figure like Cardi B — one who actually walks the walk (and raps the rap) on female empowerment — becomes the most famous face associated with the legacy brand.

After all, nowadays you can say “pregnant” (and a lot more) on television. So maybe, with Cardi B helping to lead the charge, Playboy will finally, after nearly seven decades, become the bastion for progressive female empowerment that it always claimed to be.

Dolly Parton, 75 Recreates Her 1978 “Playboy” Cover for Her Husband’s Birthday