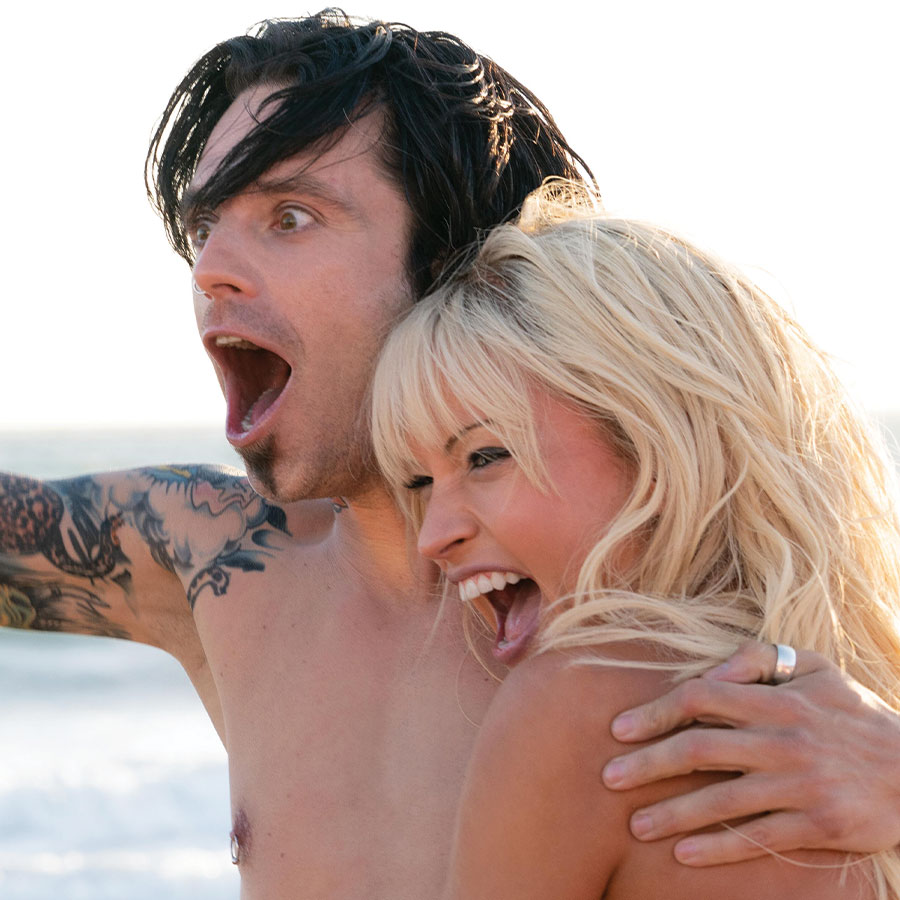 As the tagline “the greatest love story ever sold” promises, the series tackles the infamous theft and aftermath of an explicit 54-minute tape of the then-newlyweds’ intimate home movies, the fallout on their relationship, and the way it shifted celebrity coverage. But it also explores the sexist attitudes towards Anderson — her years as the punchline of tawdry jokes — while attempting to re-center the actress in her own narrative.

Here, eight things to know about the miniseries and the real-life events that inspired it.

Does this story merit eight episodes? No, probably not. But when it comes to Lily James as the B.C.-born Anderson, the Downton Abbey darling certainly looks the part thanks to a transformation that reportedly took four hours a day including regular spray tans and big blonde wigs, false teeth and chest prosthetics. There are perfunctory flashbacks to Anderson’s discovery, on the stadium screen at a B.C. Lions football game in the summer of 1989, before being the “Tool Time girl” on the hit sitcom Home Improvement and rising to fame as a Playboy pin-up and in her signature red swimsuit on the 1990s beach hit Baywatch. Stan, meanwhile, mostly disappears into the role of tiresome man-child Lee, capturing the drummer’s loose-limbed physicality and explosive temper.

There is much cavorting on-screen, especially between the couple — presumably to evoke the same undercurrent of carefree joy and love that oozes from the stolen footage, but also to show off the attention to period detail, including the transformative makeup, tattoo and prosthetics work.

Pam and Tommy is also about how hapless handyman Rand Gauthier (Seth Rogen, also an executive producer) stole the couple’s safe for its more valuable contents as payment outstanding invoices the volatile Lee refused to honour. Gauthier only discovered the home movies by accident.

Gauthier teamed up with a pornography producer (played by Nick Offerman) and when they had no luck in regular distribution channels, sold bootlegs and distributed it in the early days of the internet. In one scene, a character accesses the New York Times’s slow-loading new website, which began publishing daily on the web in 1996 and uses search engine AltaVista. The sex tape effectively became the first viral video — the first viral anything — of the internet era. And of the modern celebrity era as well.

“That was not a sex tape,” the real-life Anderson clarified not long ago about the grainy clips of honeymoon footage on Watch What Happens Live with Andy Cohen. “It was a compilation of vacations that we were naked on.” But if there is such a thing as the era of the celebrity sex tape (see: Paris Hilton, Kim Kardashian, etc.), then this is the saga that kickstarted it, changing legal and privacy ramifications when it came to technology.

Onscreen, as members of the Baywatch crew laughingly ogle the illicit footage, viewers are meant to feel the invasion of privacy as keenly as Anderson did. In another episode, when Anderson dons a demure suit for her deposition about the leak and faces a conference room of leering lawyers, they put her, rather than the thieves, unofficially on trial because she’s someone who “wears a bathing suit on TV.”

The public at large, whether viewing the tape or passing judgement on Anderson for it, was arguably just as complicit.

Changing the Course of Celebrity Media

The Anderson/Lee tape coverage was also a crossroads moment in both topics that receive media coverage and the notion of celebrity privacy that would soon explode into round-the-clock paparazzi. The line between newsworthy and salacious gets blurred beyond recognition — in one episode, when a Los Angeles Times reporter suggests that the theft of the tape is worthy of mainstream news coverage, it’s dismissed as worthy only of the National Enquirer. (Oh, how much has changed.)

When news of the theft and the tape’s contents finally did break, it made national headlines for months and was fodder for comedians, who shamed Anderson with not-so-subtle jokey innuendo. The series re-stages the awkward Tonight Show interview in which late-night host Jay Leno broached the subject and put Anderson on the spot: “It’s not funny. It’s not funny! This is devastating to us.” The heartfelt response gave him pause — but only briefly.

In one poignant sequence, Lee and Anderson attempt a relaxing getaway but, even out of town, she feels hounded by paparazzi and judgmental strangers. Costume designer Kameron Lennox drives the point home by dressing James  in a replica of the Mexican cardigan that Marilyn Monroe famously wore in her last photo shoot 60 years ago (the famous photographs by George Barris). As heads turn to gawk at them (and guys high-five Lee), Anderson wraps the oversized sweater around herself just as protectively as Monroe did.

It Derailed Both a Career and a Life

At the time of the scandal, Anderson was poised for wider stardom and about to begin promoting her movie Barb Wire. In one affecting scene, Anderson shares her career and life dreams in a revealing monologue. When pressed by her publicist, the character singles out Jane Fonda as her role model, because the powerhouse parlayed her notoriety as a sex symbol in Barbarella into character roles, a workout empire, and lifelong advocacy and activism — and didn’t care what the public thought about any of it. (Anderson is a vocal supporter of environmental and animal-rights causes, as well as of WikiLeaks founder Julian Assange.)

James and Stan’s on-screen chemistry convincingly conveys the intensity of attraction between the savvy, sweet-natured realist and the dim-witted hedonist, but — spoiler alert — although they had two children together, their on-again, off-again relationship would not survive the scandal.

It Reinforced a Cultural Double-Standard

In a culture that polices women’s bodies and punishes women for their sexuality, the stolen tape had negative repercussions on Anderson’s burgeoning career — and the opposite effect of elevating her husband’s pop culture status. Overnight, Lee (by then, something of a has-been) became a folk hero. He was now a household name, elevated as much for his “conquest” of the Baywatch babe as for being prodigiously well-endowed.

One sequence seems plucked from the introduction of Lee’s own 2004 memoir Tommyland, in which the rocker and his penis, Dick, engage in conversation (“This is insane. My own dick is busting my balls. Dude!”) and the latter begs to be taken to the Playboy Mansion. As full-on animatronic prosthetics filled the screen, I suddenly felt as though I were watching an episode of the animated sex comedy Big Mouth, not least because Dick is voiced by Jason Mantzoukas (who also plays Jay on that show).

The Anderson/Lee sex tape is just one of several horridly mishandled and relatively recent sexual (sexist) scandals being re-appraised and corrected in the post-#MeToo era. For example, Pam and Tommy arrives on the heels of Ryan Murphy’s latest anthology series Impeachment: American Crime Story, which tackles the story of Monica Lewinsky’s affair with President Bill Clinton that made the 21-year-old White House intern the object of jokes and derision for years.

Likewise, groundbreaking entertainer Janet Jackson, 55, is the subject of a recent two-part documentary, Janet. Among her many other accomplishments, Jackson was the first woman nominated as Producer of the Year at the Grammy Awards, the first artist to be nominated in five different genres, and the first female artist to be nominated for a song she wrote and produced on her own. But it’s the 2004 Super Bowl halftime show wardrobe malfunction, where Justin Timberlake exposed her bare breast, that is foremost in the cultural memory. The viral moment became a scandal known as “Nipplegate” and partly inspired the creation of YouTube.

Puritanical politics that shame female celebrities are never far away. Take golden-age Hollywood and the treatment of actress Ingrid Bergman when she left her husband for Roberto Rossellini in the 1950s. The scandal was of such magnitude she was denounced on the floor of the U.S. Congress (as an “instrument of evil”!) and exiled from American filmmaking; a formal apology was entered into Congressional record in 1972.

And the upcoming BBC/Amazon Studios mini-series A Very British Scandal (slated to air in North America on Prime Video this year) offers a re-evaluation of the most notorious aristocratic version. It dramatizes the story of Margaret, Duchess of Argyll (played by a dazzling Claire Foy), the English socialite whose private life made headlines in the sixties. In 1963, the Duchess became the first woman in Britain to be publicly and unequivocally shamed in the media, during divorce proceedings from the Duke (Paul Bettany) that grew increasingly vicious. What proved most damning in public opinion of the case was that she was unapologetically interested in sex and, similar to Anderson, intimate Polaroids were stolen from her home.

The only appropriate response, really, is the Henry Miller quotation that Anderson uses as her bio on her now-dormant Twitter homepage: ”Everybody says sex is obscene. The only true obscenity is war.”

The saga continues. Tommy Lee has given the Hulu/Disney+ series his blessing, describing it to Entertainment Tonight as a “really beautiful story.” Anderson, however, has remained silent on it (especially since she quit all social media last year) and James says her own attempts to contact her were rebuffed.

Last spring, however, when production on the series began, Anderson’s close friend Courtney Love voiced her disapproval that it was being made at all considering how the theft “destroyed” the star’s life. And, more recently, a source told Entertainment Tonight that it’s been “very painful” for the actor and those close to her. “Pamela has no regrets about her life,” the source said, “but the only thing she would probably erase is this burglary. She feels so violated to this day. It brings back a very painful time for her.”

It wasn’t the first instance of victim-blaming or slut-shaming (as a 2014 study of the practice showed) nor will it be the last.

Yet however noble its message, the series is about a woman’s lack of agency and was made without Anderson’s co-operation or consent.

It’s worth thinking about whether revisiting her story in this way makes it just another form of exploitation.

‘Downton Abbey: A New Era’: The Dowager Countess Reveals Her “Mysterious Past” in Extended Teaser Trailer