How Books, Movies and TV Help Us Understand the Infodemic, Anti-Vax Messages and Conspiracy Theories 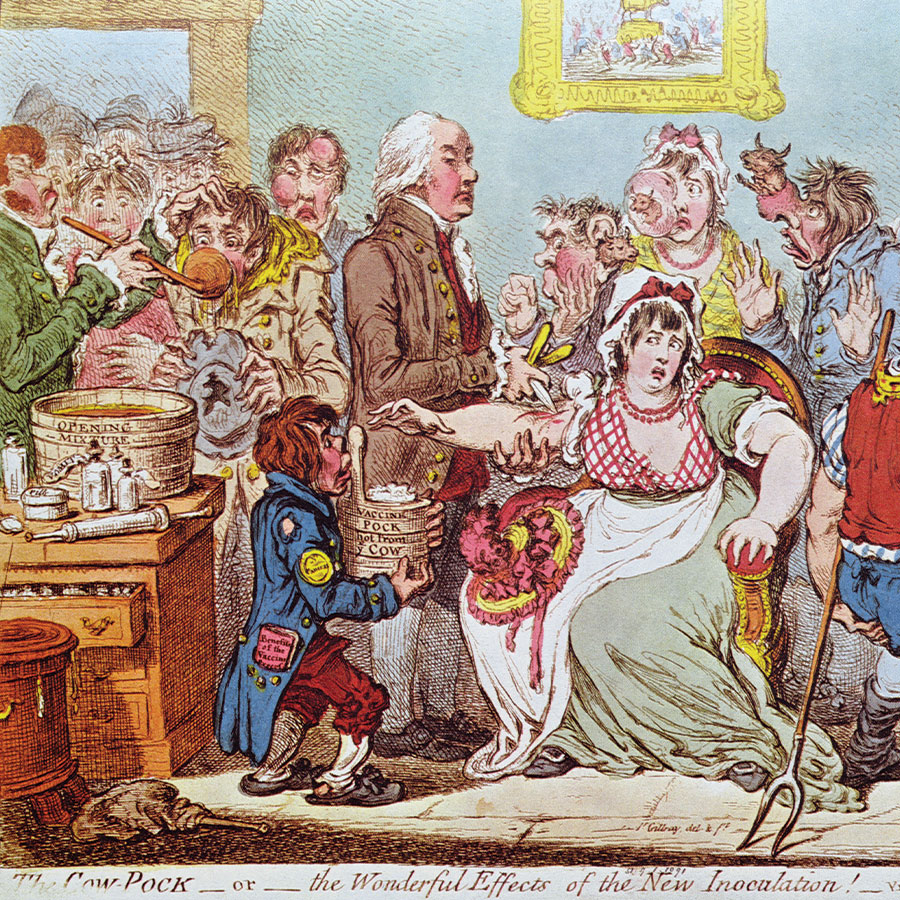 'The Cow Pock or the Wonderful Effects of the New Inoculation', published by H.Humphrey, 1809 (coloured engraving). Photo: Art Images/Getty Images

The World Health Organization defines an infodemic as “too much information including false or misleading information in digital and physical environments during a disease outbreak.”

While the term is new, the problem is not. For centuries, writers have recognized that disease outbreaks spur the spread of incorrect information, or misinformation.

My research focuses on 19th-century literature, including representations of medicine, and extends to television series that draw on this cultural history. Conspiracy theories, anti-vaxx positions and fraudulent treatments were just as concerning in the past as they are today.

For instance, in 1805 physician William Rowley suggested that a vaccinated “boy’s face” was “transforming” to look like “a cow,” a vaccination fear that English printmaker James Gillray represented in his cartoon The Cow-Pock.

English writer Daniel Defoe’s Journal of the Plague Year describes the response to the bubonic plague in 1665 London. In it, Defoe details how victims of fraudulent treatments “not only spent their money but even poisoned themselves beforehand for fear of the poison of infection.”

This rings similar to the discredited COVID-19 treatments that have made people sick — like chlorine dioxide.

Journal of the Plague Year was republished in 1832 to provide guidance in the middle of the second cholera pandemic. Almost a decade later (1841), Scottish author Charles Mackay published the first version of his Memoirs of Extraordinary Popular Delusions. In it he refers to misinformation spreading during outbreaks.

Mackay writes about the wide belief in a detailed story about a devil manipulating people into spreading disease as “an epidemic frenzy … as contagious as the plague.”

Misinformation has claimed that vaccines suppress fertility, as in Utopia, and tied viruses to global conspiracies, as in Helix.

We can also add films to the list. 2007’s I Am Legend was specifically used for misinformation.

A survey in the United States found that some people believed “a mass vaccination campaign against COVID-19” would “implant microchips in people that would be used to track” them. Those beliefs mix two arc narratives in the first run of The X-Files — one on microchips being secretly implanted to track people and another on a conspiracy tied to smallpox vaccinations.

These are just a few examples. Numerous articles have identified books, series, films and even video games that resonate with the current pandemic and misinformation.

Fictions that use viruses are generally not about science, though. A virus creates story-telling opportunities for debates about ethics that give us key information about characters. High stakes, a difficult problem and limited time — that’s a solid recipe for fast-paced adventure.

This works well with American writer Joseph Campbell’s hero-quest formula, widely used for script-writing, in which a hero, with helpers, must overcome a series of obstacles and opponents to eliminate a danger to his world.

For some dangers, such as a virus, you need a scientist to be Campbell’s hero or helper. Scientist-heroes, often with multiple areas of expertise, must think and act quickly to match the pace of adventure.

Standard quality-control mechanisms — peer review, ethics review, academic oversight, medical regulations — are too slow and boring to fit such pacing. In adventure-driven television, they are typically either ignored or repurposed as obstacles for the hero.

The hero’s scientist-father in Zoo was fired by a university because of his theories, despite the series depicting he was correct. A similar dynamic is played out in Fringe. The U.S. government is the scientist-hero’s main obstacle in the first season of Salvation.

Regulations, laws and government conspiracies all interfere with what the scientist-hero knows they must do to save the world. Misinformation does this too, and when people are accused of spreading misinformation, they’re often able to maintain their influence despite multiple findings of wrongdoing.

The Power of Culture

Efforts to address misinformation have called attention to extremism, attitudes towards the media and the need for more scientific education. This is all crucial work, but there’s also evidence that fact-checking may not be enough to change people’s minds.

Perhaps fact-checking is inadequate in part because misinformation circulates in stories. In the real world, being censured, or accused of failing to meet certain standards, can be devastating professionally. In a story, it can do the opposite: it can show the scientist-hero knows more than recognized experts.

Stories build powerful emotional attachments. We have accounts going back centuries of readers deeply worried about the fate of fictional characters. We root for heroes, boo their opponents and get anxious for the fictional problem to be solved. Facts have very little to do with it.

Infodemics make use of these cultural energies and more attention to this aspect of misinformation can help us better address it.