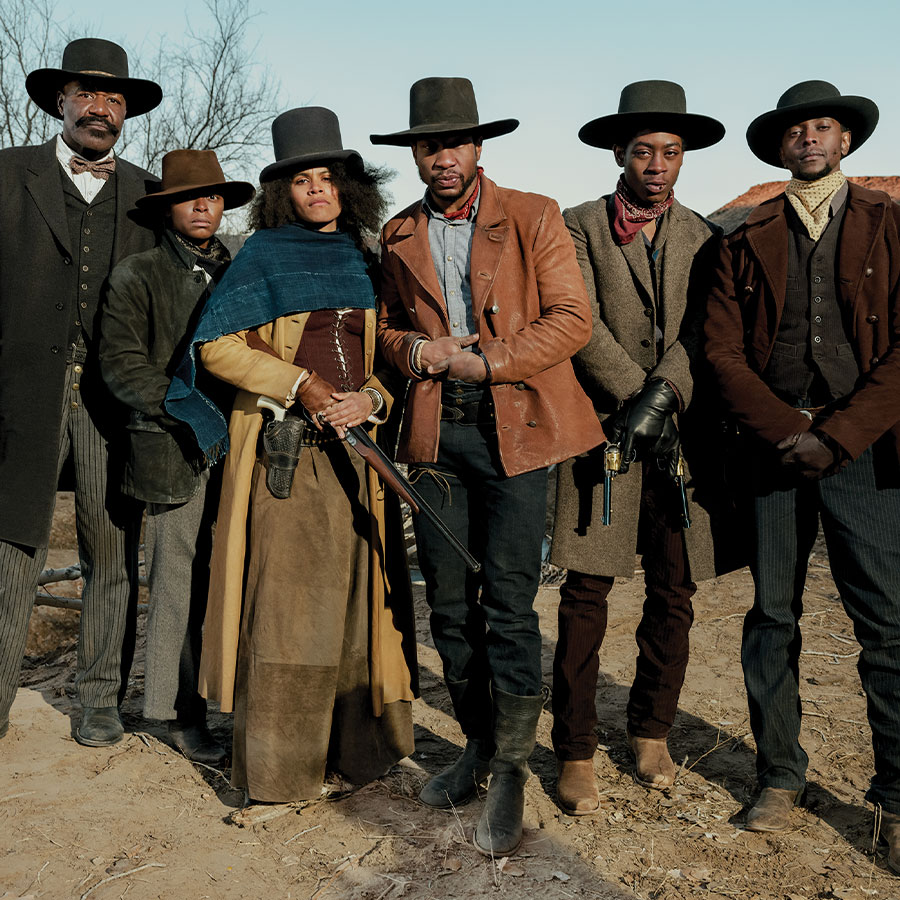 Antoinette Messam’s work on Netflix’s acclaimed Black western The Harder They Fall has garnered the Canadian costume designer the biggest buzz of her three-decade career. The standout wardrobe she created for the film, which stars a superb cast (Idris Elba, Regina King and Jonathan Majors), earned features in The Hollywood Reporter, Harper’s Bazaar and Vogue. In November, Messam won her first industry accolade for the movie’s costumes at the 2021 Hamilton Behind the Camera Award, an annual L.A. event where A-list actors honour their behind-the-scenes colleagues.

“What I particularly loved about one of my costumes is that it was designed and it remained feminine, but it still had some edge,” said King, who won a Best Supporting Actress Academy Award in 2019 for If Beale Street Could Talk, as she presented the trophy to Messam. “It had great lines, but it still allowed me to do an eight-minute fight scene without a wardrobe malfunction. That was a huge feat.”

Messam was critical to the success of the 1800s-era shoot-em-up, a fictional revenge drama about rival gangs based on real Black cowboys and female gunslingers like Stagecoach Mary, played in the film by Zazie Beetz. The movie doesn’t mention race, but its mere existence and mostly Black cast highlights the absence or marginalization of African Americans in Wild West hagiography. The Harder They Fall is part of a recentring of Black people in American cultural history, which gained traction when Atlanta-based rapper Lil Nas X scored a hit with “Old Town Road” and country singer Dom Flemons released a Grammy-nominated Black cowboys tribute project, both in 2018. A year later, Texas native Solange Knowles incorporated Black rodeo imagery in a short film for her album When I Get Home, saying, “It’s not just an aesthetic; this is something that we actually live.”

Elba also starred in 2020’s Concrete Cowboy, inspired by present-day African American horse-riding culture in Philadelphia, which reflects the current movement, dubbed the “Yeehaw Agenda” by Texan pop-culture archivist Bri Malandro. And although David E. Kelley’s crime drama Big Sky, which debuted the same year, has not been a critics’ favourite, it speaks to the moment through one of its lead detectives, a Black ex-rodeo star played by Hamilton, Ont., native Kylie Bunbury.

None of this representation is revisionism: Historians estimate that, in the early 1900s, one in four cowboys were Black.

“It’s one thing to read a script and be excited about the subject matter, because I’ve not done it before,” Messam says in a phone interview from her home in Los Angeles, where she has lived for the last decade. “But then when I started doing research to prepare for the interview, I discovered that, ‘Oh, my God, look at all these beautiful Black people in western attire; look at all these beautiful Black people in Victorian clothes.’ I’m not looking at slaves. I’m looking at homeowners, merchants, cowboys — that blew my mind.”

Pushed to innovate by the film’s British director, Jeymes Samuel, and one of its producers, rap titan Jay-Z, Messam collaborated with the actors (via Zoom fittings in some cases, because of COVID-19 separations) to customize weathered-looking cowboy boots and riding coats, melding them with Native American, Mexican and African symbols — to reflect the West’s multiculturalism — as well as select pieces from contemporary designers like Ralph Lauren, Balmain and Ozwald Boateng.

The Jamaican-born, Ontario-raised artist was touted as a “top-tier contender” for an Oscar by Variety magazine for her contributions to the film’s aesthetic — dazzling sapphire and crimson velvets, timeless leathers, and sleek hats and corsets — a look she has described as “hot swagger Victorian, with colour in the right places.”

The stylish go-getter has been on this track since her teens. I should know, because I was there. In the ’80s, Messam was that girl at Central Peel Secondary School in Brampton, Ont., swanning through the drab hallways in magnificent hats and sample-sized designer ensembles. We weren’t friends — she was a couple years ahead of me, way cooler and more luminous — but Messam’s graduation-year ambition is documented in the pages of the 1984 yearbook: “To make my name known in the fashion industry.”

She laughs when I play the Brampton card 20 minutes into our chat. “The last year of high school was hard, because I was modelling in Toronto. I was already in fashion,” she remembers. “I wore Wayne Clarke to my prom.”

The granddaughter and daughter of Jamaican clothiers — her mother made them matching outfits — Messam modelled for Ports, where Dean and Dan Caten were creative directors in the years before they launched Dsquared2, Holt Renfrew and MAC Cosmetics. A millennial cousin, Canadian supermodel Winnie Harlow, is similarly imbued with the family’s sartorial flair, and they have a mutual admiration. Harlow posted a picture of herself with Messam at The Harder They Fall premiere in October, tweeting, “You inspire me to greatness. I love you so much!”

Messam became a fashion stylist, and fell into costume design for the stability it offered her as the solo parent of a young son. She began as a buyer for the costume designer on the Fox drama Class of ’96. Her inspiration was Ruth E. Carter, who became the first Black costume designer to win an Oscar in 2019 for Black Panther. “When she got the nomination for Amistad [in 1998], I thought I was going to lose my mind,” Messam says. “Seeing that there were costume designers of colour, a Black woman doing it, and doing it at that level, was incredible.”

Since the George Floyd/Black Lives Matter reckoning in 2020, she has observed more dialogue, awareness and sensitivity to Black artists in Hollywood.

“We’re using our voices now, so that’s what I think will change, moving forward,” says Messam, whose credits include movies such as Creed, Superfly and Orphan. “I asked questions before — I’ve been called arrogant. I’ve been called so many things, because I have a mouth. But now, for the first time — they’re still uncomfortable — I think people are receptive to hearing [for example], ‘Why are we in Atlanta and we don’t have any Black crew?’”

Messam is believed to be Canada’s first Black costume designer, although she can’t prove it. “You can’t find anyone before me that actually has the costume design credits. But the fact that I was able to break through in Toronto and pull people up with me is more important to me than that title.”

A version this article appeared in the Feb/March 2022 issue with the headline “Saddling Up,” p. 82.

Designing “Dynasty”: How the Style of the Legendary 1980s Series Embodied the Excess of the Decade