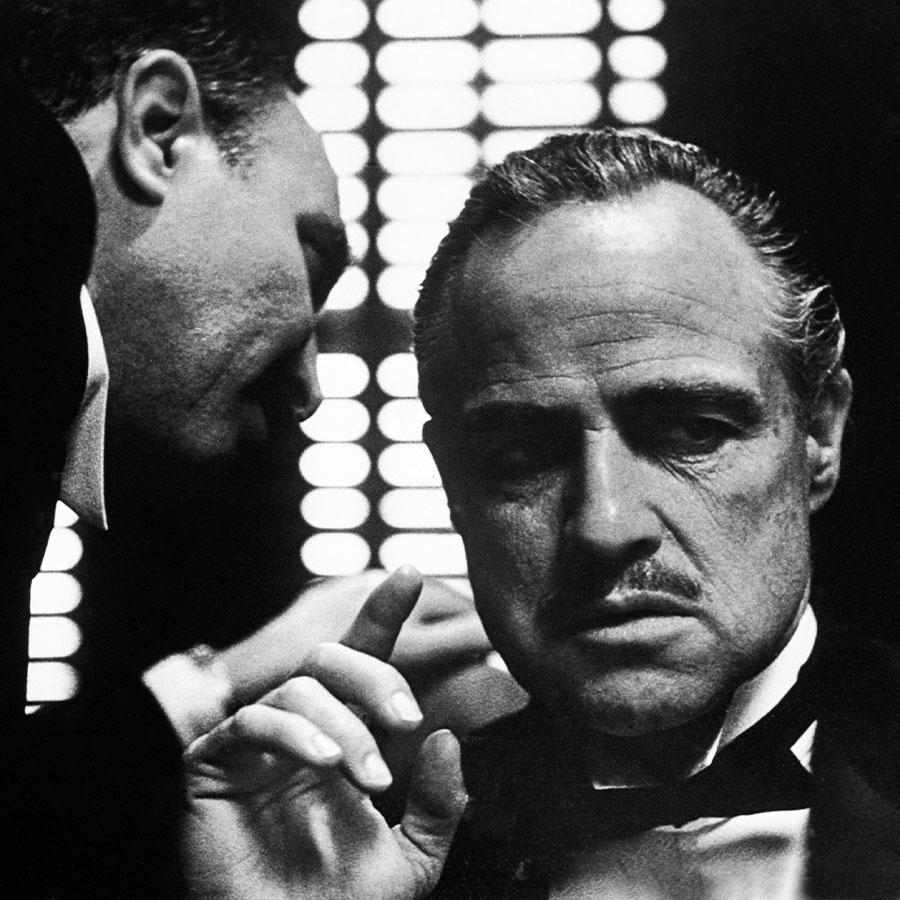 Marlon Brando as Don Vito Corleone in 'The Godfather.' The 1972 classic, which turns 50 on March 24, created a legacy that continues to influence Hollywood films and television shows today. Photo: Film Publicity Archive/United Archives via Getty Images

It won multiple Oscars — including Best Picture — has been named one of the greatest films of all time and is a favourite of everyone from movie buffs to former U.S. president Barack Obama.

And on March 24, The Godfather turns 50, marking the milestone secure in a legacy that continues to influence new generations of filmmakers.

Directed by Francis Ford Coppola and based on the novel by Mario Puzo, The Godfather is a cinematic masterpiece about the inner workings of an Italian American crime family, the gangster culture that engulfs it, and the transformation of Michael Corleone (played by Al Pacino) from straight-laced son of a mob boss into his father’s ruthless, power-hungry successor.

Like any great work of art, however, the impact and influence of The Godfather isn’t relegated to its own time. In fact, two new projects — the film Francis and The Godfather, which is in production, and the miniseries The Offer, which premieres in April — both chronicle the behind-the-scenes turmoil that went into making the film.

So to mark The Godfather at 50, we look at how the ripple effects of the film on popular culture and society as a whole are still evident today.

Some of Your Favourite TV Shows Wouldn’t Exist Without It …

… Or, at least, they wouldn’t exist as we know them.

It’s a given that most gangster films that followed The Godfather benefited, in ways big or small, from the influence of Coppola’s classic — if not directly in theme or style, then through the fact that The Godfather reignited the public’s love for the genre.

On the small screen, shows like The Sopranos are obvious direct descendants of The Godfather. In fact, not only did characters in the groundbreaking HBO series literally reference the movie in their conversation, but scenes like the attempted assassination of mob boss Tony Soprano while leaving a newspaper stand — complete with Tony carrying a bottle of orange juice he’d just purchased, which echoes the hit put on boss Vito Corleone at a fruit stand (during which he spilled a bundle of oranges into the street) in The Godfather — are direct homages to the film.

But other hit television shows have also benefited — and continue to benefit — from The Godfather’s influence. As the Wall Street Journal recently noted, “from The Sopranos to Breaking Bad to Succession, the fingerprints of The Godfather can be seen across the prestige TV landscape.”

Vince Gilligan, who created Breaking Bad, told the WSJ that, “You can’t make a TV show like Breaking Bad and not immediately trace influences to The Godfather. It’s a brilliant tragedy of this man, Michael Corleone, who does everything in his power to save his family and keep it together, and by that act winds up destroying his family.”

“I learn from it every time I rewatch it,” he said. “From the photography I’ve learned that you don’t need to see everything on-screen. It’s striking how often you don’t see the faces of the characters who are talking. [Y]ou can linger on character, you can linger on small details if the audience is interested and engaged. You don’t have to be hurrying the plot along at breakneck speed.”

Meanwhile, The Guardian explored the parallels between The Godfather and the blockbuster HBO series, Succession, adding, “Deep inside 2022’s most state-of-the-art storytelling are Francis Ford Coppola’s 50-year-old themes: the boss and the shadow his power casts across cursed adult children. The dramas of Waystar Royco have their own energy, but also enough of a debt for each [season] run to end in homage.”

Those homages, The Guardian noted, include a wedding in the first season finale (a nod to the opening of The Godfather), “a Fredo-style kiss preced[ing] betrayal” at the end of Season 2 and, to cap the third season, “another wedding, more treachery and a closing shot that winked so hard at Coppola, fans called Matthew Macfadyen’s family-by-marriage sap ‘The Tomfather.’”

In fact, as the New Yorker declared when reflecting on The Godfather’s influence way back in 2013 — six years after The Sopranos ended, the same year Breaking Bad concluded and during Mad Men’s original run — “Francis Ford Coppola should properly be considered the founder of modern television.”

It Literally Changed the Face(s) of Hollywood

It’s easy to look at the all-star cast of The Godfather in hindsight and consider it a no-brainer: Marlon Brando, Al Pacino, Diane Keaton, Robert Duvall, James Caan, Talia Shire, John Cazale and so on.

But it’s important to remember that Coppola had to fight for his cast. Brando, at 47, was something of a washed up actor at the time. Paramount wouldn’t even consider casting him as Vito Corleone unless he met a list of conditions, including submitting a screen test in the role (which Coppola covertly managed to arrange).

Paramount also didn’t want the unknown and, apparently, too short Al Pacino to play Michael Corleone, preferring instead to cast an established star and box office draw like Warren Beatty or Robert Redford, among other options. Even James Caan, who eventually played Michael’s hot-headed older brother Sonny, was considered for the part of Michael over Pacino.

At the time, Caan, Keaton, Shire (Coppola’s sister), Cazale and even Duvall were all either relatively unknown or not considered lead players in Hollywood prior to the release of The Godfather. Even the choice of Coppola himself — then a 32-year-old director with no major film credits to his name — to helm The Godfather was risky.

The film and its critical reception, however — including Oscars for Best Picture, Best Actor (Brando) and Best Adapted Screenplay (shared by Coppola and Puzo), as well as Oscar noms for Best Director and Best Supporting Actor (Pacino, Duvall and Caan) — reinvigorated Brando’s career and propelled Pacino, Keaton, Duvall, Caan, Shire, Cazale and Coppola to Hollywood stardom.

For the rest of the ’70s, numerous films that helped define the decade in cinema — Apocalypse Now, Last Tango in Paris, Serpico, Dog Day Afternoon, Funny Lady, Annie Hall, Manhattan Murder Mystery, The Deer Hunter, The Conversation and Rocky and Rocky II, not to mention The Godfather Part II — starred members of The Godfather cast and/or were directed by Coppola.

“The Godfather … changed the star system of the 1970s,” an article on the film’s history published by Australia’s Special Broadcasting Service explained. “As Don Vito Corleone, Marlon Brando … was returned to leading-man status. Pacino, Caan, Keaton, Shire, Robert Duvall and John Cazale dominated the screen for the rest of that decade, and the years ahead.”

As well, a recent story by Indiewire noted that “Before The Godfather, Paramount production head Robert Evans was on the ropes. Its success gave him the power to greenlight more iconic films for the studio, including Serpico, Chinatown, Nashville, and Coppola’s The Conversation.”

If you’re a fan of big screen blockbusters, you can thank The Godfather for setting the precedent. Indiewire noted that, in the early 1970s, most films were released on a few screens in major markets (New York, Los Angeles) before spreading to other cities and smaller markets over the course of months. Forget a major opening weekend rush to see a film. Depending on where you lived, you may have to wait two months to see a film that folks in the biggest markets were already raving about.

The Godfather, however, changed all that. By going national in week two of its release, the film — and movie studio Paramount — reinvented how movies are delivered to audiences forever.

“This was radical,” Indiewire added, “especially for a three-hour film and in a time when movies weren’t advertised on television, and it worked. The success inspired other films to reconfigure their release strategies, culminating with Jaws in 1975 and its introduction of the nationwide same-day blockbuster release. (Jaws also drew from the Godfather strategies with its 27-year-old director, Steven Spielberg, and a cast comprised of unlikely box-office draws.)”

Movie sequels weren’t really a thing back in the early ’70s, as whatNerd discussed in a story earlier this year, because “most studio-funded pictures were meant to be one-off pieces.”

The Godfather franchise, of course, changed that.

The success of the first film led to the demand for a second — The Godfather: Part II.

“The sequel’s success influenced and popularized numbered sequels in Hollywood,” whatNerd added. “Before The Godfather: Part II, no mainstream film had ever had a numbered sequel due to studios (strangely) laboring under the opinion that audiences didn’t want to see more of the same story.”

Of course, once Hollywood saw that sequels could mean big money, Tinseltown began going to that well a lot more often.

“The industry shift represented by both Godfather films had studios rethinking their production beliefs and methods, and that shift has threaded itself through to modern cinema,” the whatNerd story noted. “The  … Marvel Cinematic Universe is powered by sequels and instalments throughout the shared comic book universe, and it has essentially pushed the idea of cinematic follow-ups to new heights. And it all started with The Godfather: Part II.”

The influence and reach of The Godfather also extended far beyond Hollywood.

In his celebrated 2012 book The Godfather Effect: Changing Hollywood, America and Me, author Tom Santopietro looked at how the film helped change the perception of Italians on screen and off. “The film changed Hollywood because it finally changed the way Italians were depicted on film. It made Italians seem like more fully realized people and not stereotypes,” Santopietro told Smithsonian Magazine in 2012, adding that, unlike previous mob films, this one was made by an Italian filmmaker. “Italian-Americans are very sensitive about their image in movies because it has traditionally been so negative, as either mobsters or rather simple-minded peasants who talk-a like-a this-a.”

As well, he added, “I feel it helped Italianize American culture … I think it helped people see that in this depiction of Italian-Americans was a reflection of their own immigrant experience, whether they were Irish or Jews from Eastern Europe. They found that common ground.”

And while The Godfather didn’t exactly depict Italians acting ethically — and, you could argue, it helped foster the stereotype that most Italians are involved with the mob in some form — Santopietro said that, “permeating all of it is the sense of family and the sense of love.”

To illustrate his point, he calls on the scene in The Godfather where Vito Corleone (Brando), having essentially given up control of the family to son Michael (Pacino), passes along both his wisdom about the mob game but also his love for his son, and how he wanted him to travel down a more legitimate path in life.

“What you remember is that it is a father expressing his love for his son, and vice versa. That is what comes across in that crucial scene, and that is why I feel that overrides the stereotypical portrayal that others object to.”

In addition, Santopietro described how The Godfather actually had an impact on real-life organized crime (aside from mobsters being a fan of the film). That includes how phrases like “I am going to make him an offer he can’t refuse” is used by real mobsters, or how the term “the godfather,” which Mario Puzo concocted to describe the head of a crime family, entered the popular lexicon as a term to describe real-life mob bosses.

“I think these are phrases and terms that are not just used by the general public, but are also used by the FBI. So that is a powerful piece of art.”