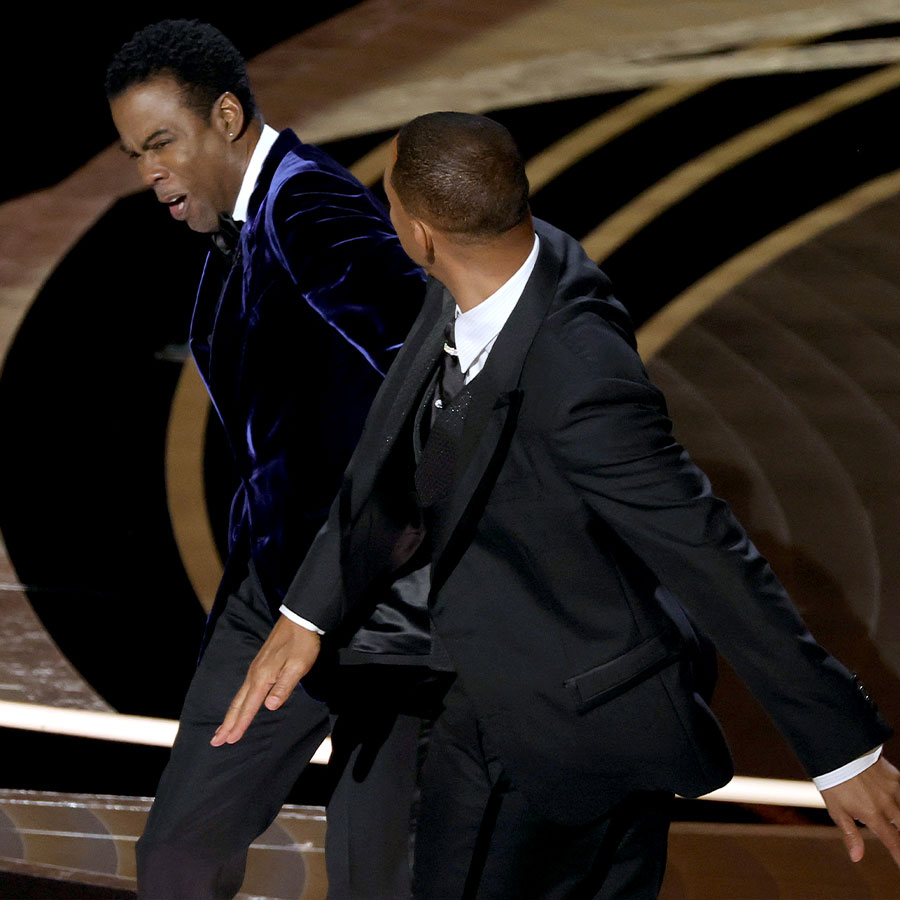 There’s no question the primary aim of the 94th Academy Awards held in Los Angeles Sunday night was pleasing as many people as possible in ways that left nothing to chance. And for the most part, they succeeded — though perhaps not in the way producers planned.

That may be because the schemes for success were many, varied, and unabashedly canny. Like having the ballistic kiddo smash “We Don’t Talk About Bruno” from the animated Disney film Encanto performed practically in Technicolor even though it wasn’t nominated for an award. (Lin-Manuel Miranda, who wrote the song and was nominated for another song from the same film, stayed home with wife Nadal, who tested positive for COVID).

Add to that gonzo feat appearances by mainstream mega-stars Beyoncé and Billie Eilish and Finneas performing songs that were nominated for Best Original Song (“Be Alive” from King Richard and the eponymous theme from No Time To Die, respectively; Eilish won the statuette).

Most conspicuously, and for the first time, the Academy of Motion Pictures Arts and Sciences invited fans to get in on the game and cast their vote, via social media, for their #OscarsFanFavorite (the voters’ favourite film of the last year) and #OscarsCheerMoment (cheer-worthy moments in movies), both announced during the awards despite being unofficial categories.

The latter was anti-climatic in the extreme (wow… Spider-man: No Way Home and Avengers: Endgame have fans?!) and the former — tick, tick…BOOM!, Spider-man: No Way Home, Minamata, Cinderella and zombie scorcher Army of the Dead, which came out on top — was frankly embarrassing, all but confirming this experiment in tangential audience inclusion will likely never happen at the Oscars again.

On the upside, Jane Campion, 67, became the third woman overall to win Achievement in Direction for The Power of the Dog and the only woman twice nominated in the category. The family drama CODA, featuring a largely deaf cast, took home the coveted Best Picture award and provided some of the most heartwarming moments of the night.

Canadians had a good showing at the Oscars as well, with the sci-fi epic Dune, directed by Quebec-born Denis Villeneuve, 54, leading the pack with six Oscars on the night, for Best Cinematography, Original Score, Sound, Visual Effects, Film Editing, and Production Design. Halifax-born director Ben Proudfoot won the Oscar for Best Documentary Short for The Queen of Basketball, about female basketball player Lusia Harris, the first woman drafted into the NBA. And Canuck actor Simu Liu, dressed in a Canadian red tuxedo, quipped with comedian Tiffany Haddish about the Great White North while presenting the award for Best International Feature Film. After the Shang-Chi and the Legend of the Ten Rings star noted that he was from Canada, Haddish declared her affinity for our nation, adding “I like that circle bacon they’ve got, the men with the jackets that ride on moose with the hats, that Molson beer, the accents.”

As well, musician and Roots drummer/co-frontman and filmmaker Questlove, 51, nabbed the Best Documentary Feature Oscar for his film Summer of Soul, about the massive 1969 Harlem Cultural Festival that has been dubbed the Black Woodstock, but was largely forgotten.

Questlove’s band, The Roots, also serves as the house band for The Tonight Show Starring Jimmy Fallon and, in a unique twist of pop culture fate, his Oscar win for Summer of Soul comes one year after musician Jon Batiste — the bandleader for The Late Show with Stephen Colbert‘s house band Stay Human — won the Oscar for Best Original Score for the Pixar film Soul.

And to keep everything moving, the Oscars boasted three cohosts — Wanda Sykes (58), Regina Hall (51) and Amy Schumer (40) — who delivered heaps of zingers during their opening monologue, bulls-eyeing a broad swath of targets from the Golden Globe Awards to Space Jam: A New Legacy to institutionalized Hollywood sexism.

Yep, the 2022 Oscars were a humdinger alright, being both an awards show and a variety show… while committing Smith and comedian Chris Rock to Oscars infamy — right up there with the 1974 Oscars streaker and the accidental announcement of the wrong Best Picture winner in 2017. That was just one of many memorable moments from the show.

Will Smith Gets Physical

Will Smith smacked Chris Rock. For real. Rock, 57, was riffing as he teed up to present the award for Best Documentary Feature and cracked a joke about Jada Pinkett Smith — who was sporting very short hair — gearing up for a part in a fictitious G.I. Jane 2.

Pinkett Smith, 50, who suffers from alopecia that affects her hair and can cause hair loss, rolled her eyes. But Smith, 53, brokering no forgiveness, walked up to the stage, socked Rock in the face, returned to his seat and screamed, “Keep my wife’s name out of your f—ing mouth.” A TV delay allowed producers to silence the volume during the broadcast, but the words were clear on Smith’s lips.

Apparently, the animosity has some history, dating back to comments Rock made about Pinkett Smith when hosting the Oscars in 2016. Given that Pinkett Smith has been open about suffering from alopecia, Rock’s comment about her hair scanned below the belt. He countered the moment by saying, “That was the greatest night in the history of television.”

Smith, however, had the last word. “Richard Williams was a fierce defender of his family,” he said while later accepting his Oscar for Actor in a Leading Role in King Richard. “Love will make you do crazy things.”

Queen Bey Kicks Off the Oscars

The first musical performance of the evening was also the spectacular show opener: Beyoncé belting “Be Alive” from King Richard, appropriately introduced by tennis icons Venus and Serena Williams.

The film is about their charismatic coach dad Richard Williams — a fact pointedly, if gently, mocked by co-host Amy Schumer in one of many razor-sharp feminist hits on the Hollywood establishment.

Beyoncé’s number featured the singer on an expansive, urban tennis court painted mint green and surrounded by a small army of musicians and dancers wearing that same shade of green.

And, of course, Beyoncé and husband Jay-Z also lit up the red carpet, with the singer in a stunning yellow gown and the 52-year-old rapper accompanying her in a white tuxedo jacket and black pants.

Anniversaries were richly and nostalgically celebrated at this year’s Oscars. A salute to the James Bond franchise, on the 60th anniversary of its cinematic launch with Dr. No starring Sean Connery, via a montage set to Paul McCartney’s “Live and Let Die” was pretty swell. I mean, a Bond montage… c’mon!

As well, the 30th anniversary of White Men Can’t Jump was celebrated (nominally) as Wesley Snipes, 59, Woody Harrelson, 60, and Rosie Perez, 57, reunited on stage to award Achievement in Cinematography to Greig Fraser for Dune. And Pulp Fiction stars Uma Thurman, 51, Samuel L. Jackson, 73 and John Travolta, 68, reunited and did a little dancing to mark the film’s 28th anniversary before presenting the Best Actor Oscar to Will Smith.

And Canuck actor Elliot Page appeared alongside Juno costars Jennifer Garner, 49, and J.K. Simmons, 67, to celebrate the 15th anniversary of that film and present the award for Best Original Screenplay to Kenneth Branagh, 61, (his first Oscar!) for his semi-autobiographical film Belfast. Juno screenwriter  Diablo Cody took home the same award for her film at the 80th Academy Awards in 2007.

Elsewhere, the In Memoriam section — though criticized by some for the choice of upbeat music during the presentation — featured individual tributes to Betty White (by Jamie Lee Curtis, 63), Sidney Poitier (by Tyler Perry, 52) and Canadian director Ivan Reitman, who died last month at the age of 75. Actor Bill Murray, 71, who appeared in numerous Reitman films including the first two Ghostbusters movies, Meatballs and Stripes, spoke in memory of the late director.

“When Ivan Reitman was 10 years old, his parents gave him a sleeping pill, wrapped him in a blanket and put him beneath the deck of a boat to escape Czechoslovakia,” Murray said. “He made some movies — some really good movies — he married a pretty girl, they raised some children, and they make movies, too. Ivan, I love your work.”

Déjà Vu for West Side Story

Ariana DeBose captured the first award of the night — Best Supporting Actress — for playing Anita in Steven Spielberg’s remake of West Side Story. It’s the same award bestowed on actress Rita Moreno for the same role in the original film exactly 60 years ago this year. Moreno, 90, looked gorgeous in a black gown as she sat in the audience and received thanks from DeBose, who described herself as an openly queer woman of colour; an example that anyone can do anything.

Fun fact: DeBose and Moreno are only the third pair of actors to win Oscars for playing the same role. They join Marlon Brando and Robert De Niro for playing Vito Corleone in The Godfather and The Godfather II respectively, and Joker actors Heath Ledger (The Dark Knight) and Joaquin Phoenix (The Joker).

Youn Yuh-jung — the 74-year-old Korean actress who won the Best Supporting Actress Oscar last year for her role in Minari — returned this year to present the award for Best Supporting Actor. But she inadvertently stole the show (and delighted fans on social media in the process) when she admitted that last year she became frustrated when people mispronounced her name and now this year, she  struggled with pronouncing the names of some of the nominees.

But when she did announce the eventual winner — Troy Kotsur, one of the deaf stars of the family drama CODA — she used sign language to reveal him as the winner before she said his name out loud.

Meanwhile, Kotsur, 53, became only the second deaf actor to win a statuette in Oscars history (his CODA co-star, Marlee Matlin, won For Best Lead Actress in 1987 for Children of a Lesser God). So much about this win was touching, from the audience flashing their hands in lieu of clapping as Kotsur took the stage to the actor’s acceptance speech, read aloud by a deaf interpreter. In the speech, he talked about screening CODA at the White House and quipped that he wanted to teach President Joe Biden and First Lady Dr. Jill Biden dirty words in sign language. Then, his speech turned emotional as he discussed acting journey and dedicated it to his father, a deaf man who was paralyzed from the neck down in an accident and, therefore, couldn’t sign.

It truly stands as one of the loveliest and more heartfelt speeches in Oscars history.

CODA‘s Best Picture win was presented by Lady Gaga and a wheelchair-bound Liza Minelli, 76. The live mic delivered a touching moment when Gaga whispered “I got you” to the legendary performer, after she struggled to present the nominees.

13 of the Most Memorable Moments in Oscar History