Hugh Laurie On Adapting Agatha Christie’s ‘Why Didn’t They Ask Evans?’ for the Small Screen 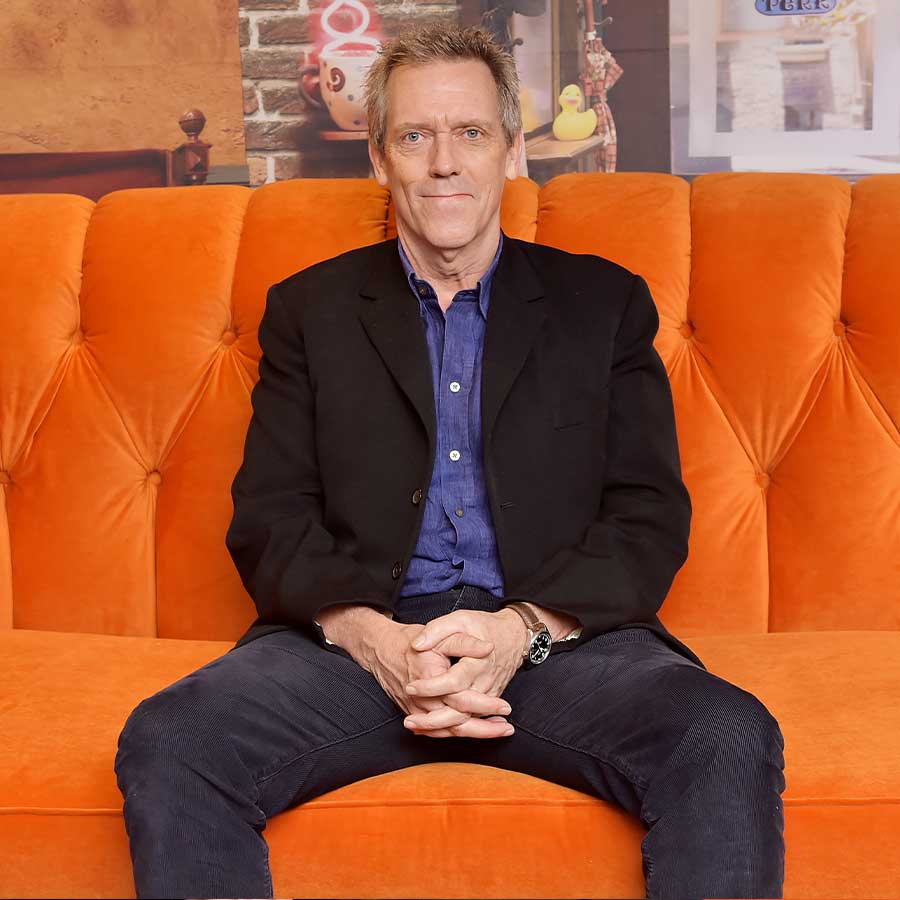 Hugh Laurie, seen here during the 2019 Toronto International Film Festival, adapted 'Why Didn't They Ask Evans?' and said that he always thought Agatha Christie's novel "had a kind of comic spirit to it." Photo: Stefanie Keenan/Getty Images for AT&T

Depending on your taste and vintage, actor Hugh Laurie is best known as an upper-class twit on the BBC sitcom Blackadder, the misanthropic medical genius of House, the gormless Bertie Wooster (to frequent comedic foil Stephen Fry) in Jeeves & Wooster, or as a chillingly believable baddie in prestige thrillers The Night Manager and Roadkill.

The 62-year-old’s latest project, Why Didn’t They Ask Evans? (available now exclusively on BritBox) is an ideal mash-up that expertly combines elements from all of them. The English actor adapts and directs the new limited three-part series based on Agatha Christie’s 1934 novel (published in North America as The Boomerang Clue).

When the project was announced last spring, Laurie explained that he first read the Christie novel as a child and has loved it ever since, returning to it often. In it, a man lies dying at the foot of a cliff, the victim of an apparently accidental fall, and uses his dying breath to pose the cryptic question of the title. Genial boy-next-door Bobby Jones is there to hear it and is soon caught in a web of conspiracy, betrayal and murder.

“But the real mystery is what does the question of the title mean?” Laurie observed in a recent interview. “It’s like a 100-dimension Wordle where you’re trying to solve this puzzle, and until you solve it, it’s not really satisfying.”

While none of Christie’s works could accurately be called obscure (as is oft-repeated, her works remain the most published, after Shakespeare and the Bible), Why Didn’t They Ask Evans? is an arguably lesser-known stand-alone novel. In 1980, the novel was first adapted with the pairing of actors Francesca Annis and James Warwick — who would go on to star in popular adaptations of the author’s Tommy and Tuppence stories — in the lead roles. In a 2011 adaptation, the story was reworked to include actress Julia McKenzie as Miss Marple. The original novel, however, doesn’t feature any of Christie’s regular detective characters. Instead, it’s about childhood friends who renew their acquaintance after the incident with the dying man compels them to become amateur sleuths.

A few things in this latest incarnation of Why Didn’t They Ask Evans? move around in ways that make the story more engaging, cinematically, but there’s none of the self-conscious wink, mannered acting or camp that plagues some Christie adaptations. It’s a faithful adaptation that’s buoyant and refreshingly understated: tense where it needs to be while also being funny in the manner of the original novel.

Watching it brings to mind the late screenwriter Clive Exton, the virtuoso who did the impossible when he adapted Jeeves & Wooster and made wordsmith P.G. Wodehouse’s language sings on screen; but also brought the David Suchet incarnation of detective Hercule Poirot to life in those droll early episodes. Side note: fans of preposterous Wodehousian upper-class nitwit nomenclature (Gussie Fink-Nottle, Tussy Glossop, et al.) will enjoy that there’s a suspect with the surname Bassington-ffrench and another character who goes by the nickname Thicko. (And he is.)

“I always thought the novel had a kind of comic spirit to it,” Laurie elaborated about his favourite Christie during the recent TV Critics Association press tour, and likened her playfulness to Dashiell Hammett’s famous his-and-hers crime novel The Thin Man published the prior year (which he theorizes might have given Christie inspiration). “It’s got a sort of American bounce to it and a comic spirit, which I absolutely adored in The Thin Man too.”

There’s certainly something of Myrna Loy’s Nora Charles in actress Lucy Boynton (Bohemian Rhapsody, The Ipcress File) as the crisp and unflappable Lady Frances Derwent, a.k.a. Frankie. The smart young socialite is bored with her aimless lifestyle and thirsts for adventure — a spirited “it” girl similar to Christie heroines Eileen “Bundle” Brent and Tuppence Beresford. Frankie’s not above using her title to advantage, and it’s her instincts and impetuousness that propel their escapades into full caper mode.

“They’re extremely bright, funny, quick-witted and quick on their feet, as the characters are. They’re game — they’re up for it they’re up for the adventure,” Laurie says of what made the pair right as leads, when he joined co-stars Boynton and Will Poulter (Dopesick and Midsommar) in a virtual session with Canadian media earlier this week. Their rapport was key. “The most important thing is they liked each other,” which is evident in their on-screen chemistry.

Boynton and Poulter play the childhood friends — she an Earl’s savvy daughter, he the local vicar’s guileless son — who have drifted apart as they’ve grown up, in part due to being of different social classes. When they meet by chance, that disparity comes up in both serious and comedic repartee and some of the best zingers come from their observational humour. Or is it oblique social criticism from its author?

“Not to say that Agatha Christie wasn’t aware and perhaps critical,” Laurie says, but cautions against reading too much class theory into the setup of a novel written in 1934.

Why Didn’t They Ask Evans? rewards close viewing — the dialogue is naturalistic and snappy without being showy, with many seeming throwaway lines (and a great Daily Mail joke) you could easily miss. One of my favourite moments is their quippy exchange in a moment of peril that involves a gleaming 1936 Lagonda, a stately lawn and plentiful sangfroid. The unexpected but pitch-perfect music cue is Elizabeth Mitchell’s jaunty version of traditional folk song “Little Liza Jane” and adds to the exhilaration of the scene.

It being a series adapted by Hugh Laurie, an accomplished musician who has released two blues albums (and also has Bertie Wooster’s memorable recordings to his name), I paid attention to the soundtrack and variety of music styles in the score. The actors also perform fragments of songs, almost as asides, in small but meaningful ways. (Don’t get excited: it’s not quite on the level of Bertie figuring his way around Cab Calloway’s “Minnie the Moocher”). In one scene, Frankie sing-songs a few bars of an Edwardian music hall ditty in Bobby’s direction, for example, and the full meaning becomes clear only later on with the full lyrics in a choral reprise (by the Selwyn College Chapel Choir, Laurie’s Cambridge alma mater). In another, Bobby and his former shipmate Knocker head to the pub, they casually harmonize an old shanty — a charming (not to mention economical) way of conveying the depth of their friendship and ease with one another.

When I point these out and ask why he’s incorporated singing, Laurie claims he did so unawares. “I think probably the music exists at about the frequency that it exists in my own life,” he says. “Which is to say that I sing to myself every now and then when I’m sure no one’s listening, or I whistle, or you walk past a shop and you hear a tune and it gets stuck in your head.”

“The way that it comes up is incredibly organic to Bobby and Frankie’s sense of humour,” Boynton adds of the little musical moments, which she saw as the opportunity to, “further a joke between them, which I really love. And was relieved, because I do tend to keep my singing to the shower to spare everybody else!”

Poulter finds that the choice of music injects the story with a certain energy, “particularly in the planning of the heist, that takes place against the backdrop of this great jazzy soundtrack.” Laurie often played them the music he planned to use before they shot certain scenes. “Obviously given Hugh’s expertise in that area,” Poulter adds, “you knew it was gonna sound good and it was gonna be apt for the story and that particular moment.”

Another particularly memorable moment comes from Frankie’s eccentric parents, Lord and Lady Marcham, in cameos by Jim Broadbent, 72, and Emma Thompson, 62. “It was such a privilege to get to watch them improvise together, bounce off each other and just have a lot of fun with the material,” Boynton recalls of her one lively scene with the legendary actors. “There’s a lot of … pressure to get this kind of writing right and this kind of character right, and to see them playing — as actor-y as that sounds to say, it was inspiring,” she adds.

“It was tricky at times,” Laurie admits of being both writer and director of the project, as well as having a small role and even pitching in to source the production’s bevy of beautiful antique cars. “But I can’t claim that it came as a surprise. I volunteered for it so it’s my own fault!”

Why Didn’t They Ask Evans? is streaming now exclusively on BritBox.

‘Death on the Nile’: Why the Star-Studded Film Doesn’t Quite Capture the Magic of Agatha Christie’s Original