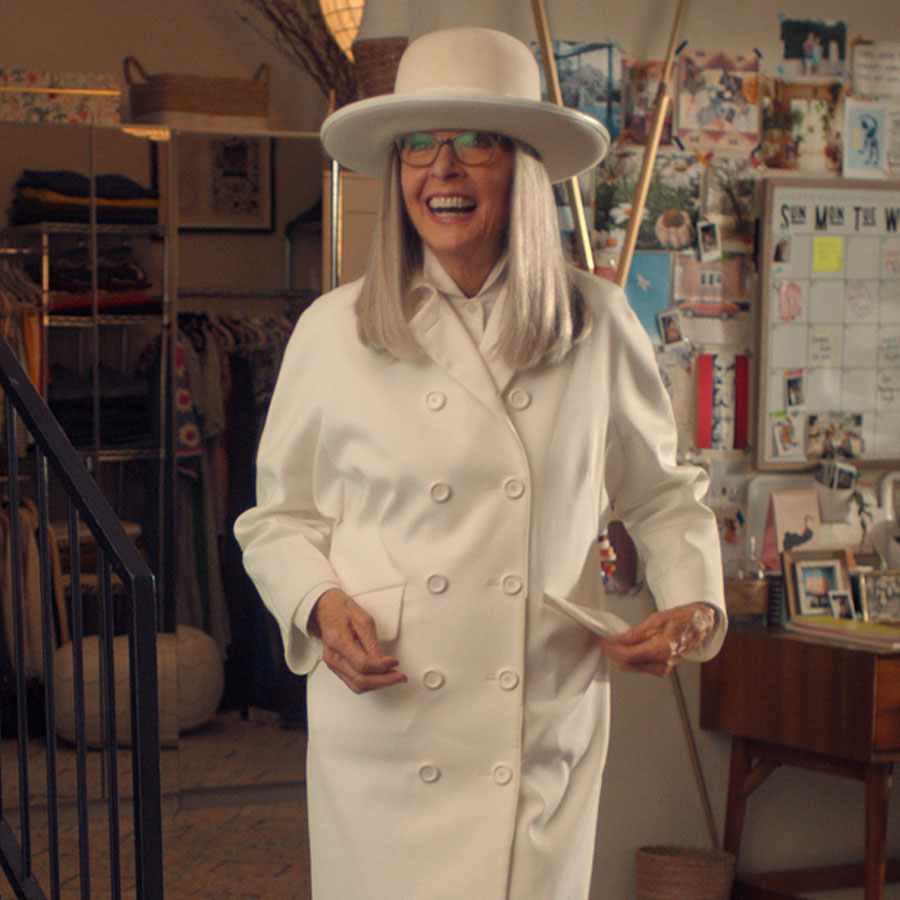 Diane Keaton, seen here in a scene from 'Mack & Rita,' has said that she enjoyed starring in the film because it allowed her an opportunity to be goofy onscreen. Photo: Courtesy of Gravitas Premiere

It’s the summer of TikTok embracing the laid-back coastal grandmother look inspired by Nancy Meyers movies (as Zoomer recently explained), of which Diane Keaton is the poster girl. The metabolism of trend, however, cycles quickly, so it’s serendipity that Mack & Rita, starring Keaton, 76, arrives in theatres this week to capitalize on the moment.

In the film, Mack (Elizabeth Lail) is a published author with writer’s block, now well on her way to becoming a one-hit wonder. To make a living, she becomes a reluctant Instagram influencer, writing branded content about socks and weighted blankets. Raised by her dynamic late grandmother (“I’ve got less time to live so I’ve got less sh*ts to give,” gran explains in flashback) she is a lover of vintage clothing, comfortable shoes and staying in to read and feels out of step with her generation. She’s the proverbial old soul — and soon, a literal one.

When a past life regression session during a bachelorette weekend of her lifelong best friend Carla (Taylour Paige) turns the aimless millennial Mack into a senior citizen overnight, what follows is less a comedy about aging disgracefully than about growing up, full stop.

Working firmly in the tradition of 17 Again, Freaky Friday and 13 Going on 30, Mack & Rita takes the body-swap potential to its extreme. And it largely works because when the older version the heroine’s true self emerges, it’s in the form of Diane Keaton. Like Big, when she returns to try and reverse the spell, the New Age mystic and his gear have vanished, and the movie passes off the older woman’s presence as that of Mack’s aunt Rita, swapping houses for a writing retreat.

After the predictable jokes about sagging breasts, aching body and lank grey hair there are charming moments of cross-generational advice. The lessons learned are not an attempt to rewrite the past but about being true to oneself at any age, and as an opportunity to improve on her future.

The self-consciously quirky feature is perhaps not as good as it should be, but as a friend-com it has its pleasures. Throwaway lines are a snapshot of popular culture and canny generalizations (“No one reads any more — isn’t every Barnes & Noble an Eataly now?”) and observations of the millennial side hustle (“Just remember, if you’re not getting paid for something, it’s a hobby.”).

As ever, Keaton is a game physical comedienne in the extended slapstick of a Pilates class or tripping on hallucinogenic mushrooms (with Canuck comedian Martin Short making a voice cameo).

Mack wants to bypass the pains of life and get to what she thinks of as the good stuff, because her young self lacks the conviction to assert her taste and choices. If youth is wasted on the young, Mack & Rita suggests, there is a liberating perspective to being older.

But growing old is a privilege and its confidence is a reward — something Mack-as-Rita learns from Carla’s mother (Loretta Devine) and the ladies from her daily Wine Club (Wendie Malick, Amy Hill and Lois Smith). It’s like a book club, but more honest (and there’s no reading).

“I didn’t lose my ‘filter.’ I just prefer to skip the small talk,” the 91-year-old Smith’s acerbic Betty explains. As Smith, recently told Cherry Picks about playing Betty, “There are so many different kinds of life, and they are all endorsing joy” in the movie.

Sure, Mack & Rita leans into the zeitgeist of the ‘OK, Boomer’ friction. But instead of the generations throwing insults, they throw affectionate shade at one another to meet somewhere in the middle. There’s less of a generational culture clash than a collection of wisdom and friendship morsels dispensed by elders who warn her against trying to be someone she’s not — regardless of which generational catchall she falls in. Directed by actor-producer Katie Aselton (who played Keaton’s daughter in Book Club), Mack & Rita was also made by a majority female cast and crew and emphasizes the longevity and support of enduring female friendship.

It’s also a lot of Keaton larking around energetically and gesturing while in great outfits — basically an opportunity for the actress to play herself to the hilt. “I liked the gags a lot and the people were nice,” Keaton recently told Parade of the feature she also produced. “I got to be an idiot in a movie; you don’t get that opportunity very often, to be goofy. It was easy.”

As to that of-the-moment coastal grandmother vibe? This film offers more of a coastal art gallerist vibe. Thanks to costume designer Allyson Fanger (of Grace and Frankie), Rita has a singular take on granny chic and dresses uncannily like off-duty Keaton, the style icon Vogue praised for her monochromatic ensembles featuring chunky boots, turtlenecks, voluminous Comme des Garçons skirts, wide belts, gloves and signature wide-brimmed hats, of course. (And like Keaton, Rita also has a penchant for red wine on the rocks.)

As I recently wrote about on this site, it’s one of a slew of new movies featuring older actresses who gamely pursue adventures, with a self-empowering message that’s less about the number of birthdays than about having the right attitude.

In this case, Mack is bolstered by her silver fox alter ego’s adventures to have more confidence in her original instincts. Which is great advice, at any age: “You didn’t want to be old,” as one character points out; “what you wanted was to be you.”

Though who wouldn’t want to be Diane Keaton when they grow up?