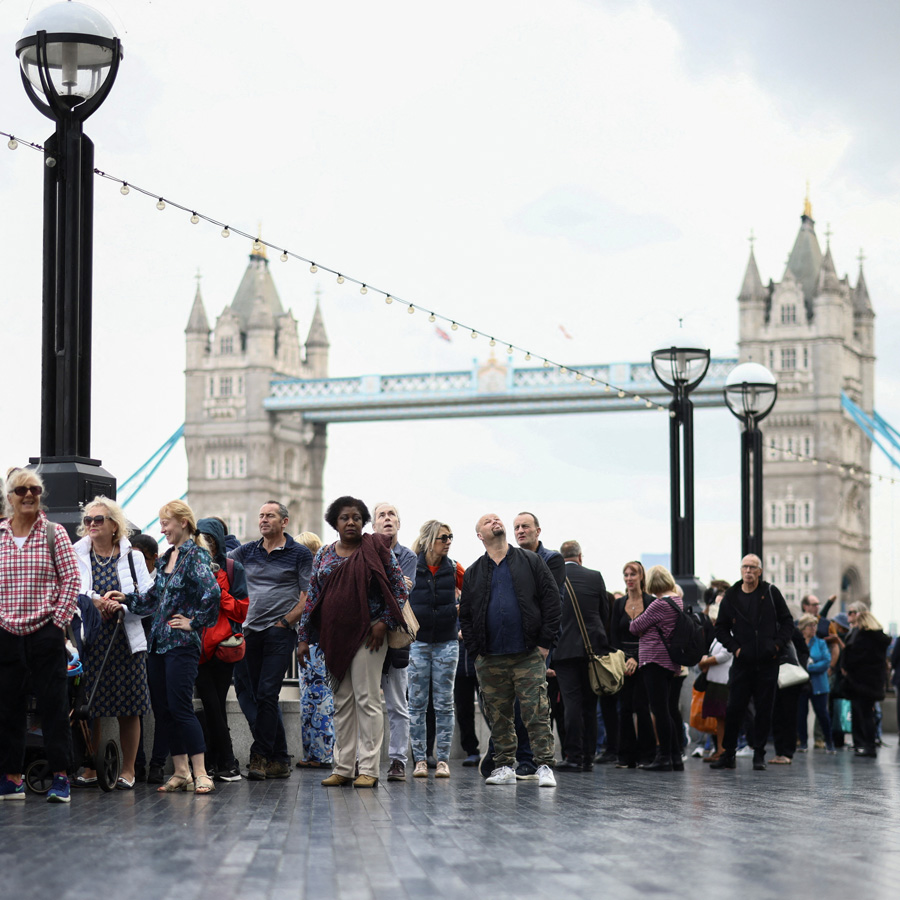 People queue near London's Tower Bridge to pay their respects to Queen Elizabeth, who is lying in state at Westminster Hall. Photo: REUTERS/Henry Nicholls

The state funeral of Britain’s Queen Elizabeth will unite people from across the globe, the official in charge of the huge ceremonial event said on Thursday, as mourners from all walks of life queued for hours to file past the late monarch’s coffin.

World leaders will gather on Monday for the funeral for Elizabeth, Queen for 70 years whose global stature was almost without equal.

Her body is lying in state in London’s ancient Westminster Hall, where tens of thousands are waiting patiently in line to pay their final respects to Britain’s longest-reigning monarch.

“These events are taking place against the backdrop of an outpouring of grief, affection, and gratitude for people in the United Kingdom, the Commonwealth, and across the world,” said the Earl Marshal, Edward Fitzalan-Howard, the Duke of Norfolk, England’s most senior peer who is in charge of state occasions.

“The Queen held a unique and timeless position in all our lives. It is our aim and belief that the state funeral and events of the next few days will unite people across the globe,” he told reporters.

As he spoke, the queue to see the Queen’s coffin stretched more than 4 miles (6.5 km) along the south bank of the River Thames, past such landmarks as Tower Bridge, crossing Lambeth Bridge as it neared Westminster Hall. Officials expect about 750,000 people to view the coffin before the lying in state ends at 6.30 a.m. (1:30 a.m. ET) on Monday.

King Charles, who has returned to his Highgrove home in southwest England after a hectic schedule of events since Elizabeth’s death age 96 last Thursday, and his three siblings, Princess Anne and Princes Andrew and Edward, will themselves hold a silent vigil alongside the catafalque on Friday evening.

Some of those queuing to see the coffin had travelled from abroad, dropping off bags at nearby hotels to join those moving slowly through Westminster Hall. There were also former soldiers with military medals and babies being carried by their parents. Many wiped away tears.

The mourners included former Prime Minister Theresa May and her husband Philip, who bowed their heads before the coffin as they filed past with members of the public.

Amy Tsai, 24, said she had travelled from Taiwan in May and had taken part in celebrations for the Queen’s jubilee in June in the Scottish capital Edinburgh.

“Now I’m waiting in line to see her lying in state. I’m just shocked,” she said.

Thomas Hughes, 20, who waited nearly 14 hours overnight with his brother, said viewing the coffin was overwhelming.

Others had travelled early in the morning to try to miss the crowds later on.

“Late yesterday evening, I made a snap decision to wake up really early and come here. I wanted to be part of history,” said Paul Frances, 72.

Details of the Queen’s Funeral

For the first time, palace officials also provided details of the funeral, likely to be one of the grandest ceremonies ever witnessed in the British capital, involving thousands from the military.

The funeral will begin at 11 a.m. at Westminster Abbey, the same church where Elizabeth was crowned in 1953, and last for about an hour. At its conclusion the Last Post will sound and there will be a two minute silence to be observed by the nation.

The body will then be taken on a gun carriage in a large procession, with Charles and members of the Royal Family walking behind, from the Abbey to the Wellington Arch at Hyde Park Corner. Guns will fire and parliament’s Big Ben bell will toll every minute.

The state hearse will then convey the coffin to Windsor Castle where there will be a further solemn procession before a service at Windsor Castle’s St. George’s Chapel.

In a later private ceremony, Elizabeth will be buried with her husband of 73 years Prince Philip, who died last year, at the King George VI Memorial Chapel where her parents and sister, Princess Margaret were also laid to rest.

Elizabeth’s body was brought to London on Tuesday from Edinburgh. Her coffin now lies in the centre of Westminster Hall on a purple catafalque placed on a red platform. It was covered by the Royal Standard flag and topped with the Imperial State Crown placed on a cushion, alongside a wreath of flowers.

The casket had been brought to the hall from Buckingham Palace atop a gun carriage and escorted by soldiers in ceremonial uniforms in a solemn procession on Wednesday.

Charles, his sons Princes William and Harry and other senior royals walked behind — the two princes united in grief despite a rift between them. Harry marks his 38th birthday on Thursday.

William and his wife Kate travelled to the royal residence of Sandringham in eastern England on Thursday to view floral tributes left there by members of the public.

Buckingham Palace said it would not provide a list of those who will attend the funeral but royalty, presidents and other world leaders are expected to be there, although certain nations, including Russia, Afghanistan, and Syria, were not extended invitations.

French President Emmanuel Macron was the latest leader to say he would attend the funeral.

U.S. President Joe Biden, who has also said he will be there, spoke to the new King on Wednesday and “conveyed the great admiration of the American people for the Queen,” the White House said.

Charles will hold an official state event on Sunday to meet the dignitaries who are attending.

Asked how the new monarch was bearing up, his spokesman replied: “I think people who’ve worked with the King know just how resilient and hardworking he is.”

The Times newspaper also reported that British Prime Minister Liz Truss was expected to hold one-on-one talks with Biden and other leaders on the sidelines of the funeral, but officials have said any such meetings will be informal.