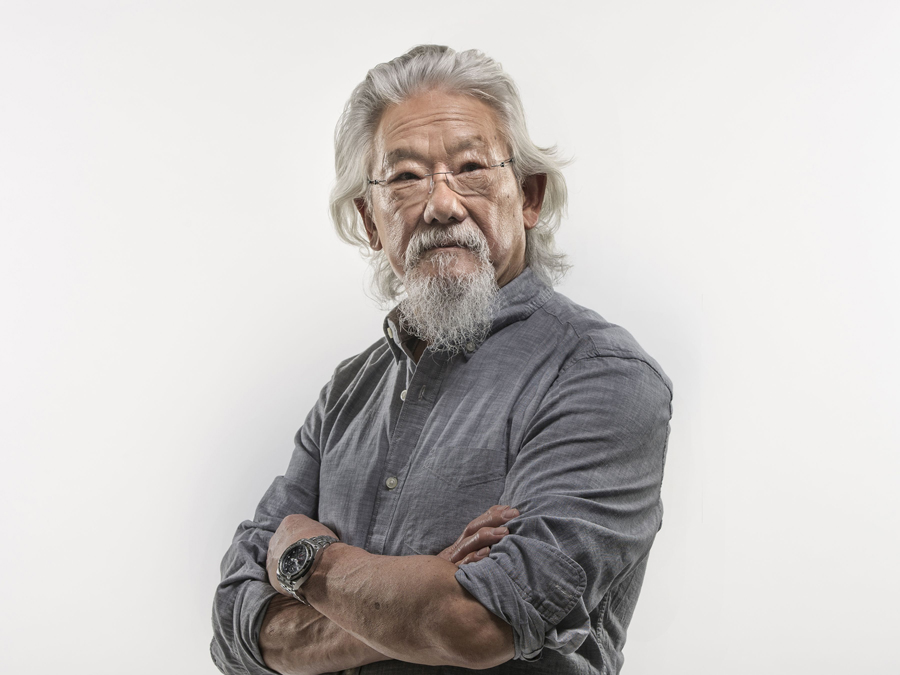 David Suzuki believes older people should be revered in society, noting that, "in my younger days I was so impatient with these old people rather than respecting and valuing them." Photo: Kevin Van Paassen/CBC

Every so often a headline pops up declaring that scientists somewhere found a way to extend the lives of fruit flies, or worms, or another tiny creature, followed by the inevitable excitement over what the breakthrough means for humans. David Suzuki, however, isn’t buying the hype.

“The idea is, ‘Oh gee, maybe we can use genetic engineering and extend life’ and all of that bullsh*t,” the 83-year-old says over the phone from Vancouver. “When you’re 70 or so life isn’t all that great unless you work on staying healthy and all that. Who needs another 50 years of a sh*tty life?”

Suzuki has a point. No one asked the fruit fly or the worm if they wanted to live longer. And as for humans, the goal isn’t so much living longer but living longer better. It’s the notion behind the latest The Nature of Things documentary, Aging Well Suzuki Style.

In the doc Suzuki explores how much aging well depends on genetics and how much it relies on external factors, travelling across Canada to endure a battery of aging tests while meeting everyday people who exemplify the idea of aging with vitality.

The Golden Age of Aging

It won’t come as a surprise to anyone that Suzuki’s health and vitality exceeds that of the average octogenarian. He keeps fit — physically and mentally — and he’s got good genes.

“I chose my mom and dad carefully,” he quips. But he also notes that he laid the foundation for good later in life health decades ago, when he worked as a child on farms and later as a carpenter to support his family following their internment in British Columbia during the Second World War and subsequent removal from the province at war’s end.

“Heavy labour in my childhood I think was very important to me,” he says. “I think it laid down a lot of the musculature in the skeletal systems that have carried me into old age.”

The documentary refers to our current “golden age of aging.” Suzuki can’t say for sure if the golden age is a result of medical advancements, a heightened awareness about health and longevity, a generational attitude toward redefining the idea of “aging,” or a combination of such factors. Suzuki did, however, experience some revelations during the doc, like just how much of a role cognitive function plays in seemingly instinctual reactions, like balance.

“You don’t realize the brain is an integral part of doing all of these things and that an active brain is what helps us in terms of our physique, our bodies,” he explains. “When Rene Descartes said, ‘I think therefore I am,’ he kind of separated the mind from the body as if they’re two separate entities. Well, they’re just not.”

Another shocking finding is the connection between oral health — for example, flossing one’s teeth — and aging. “It’s a whole new area that’s coming up that I think we’re just barely understanding now,” he says, noting that the flora and the fauna in our mouths will “infect your gut” and that “living organisms in our bodies are a critical part of our health.”

So what, then, would Suzuki say are the key elements in increasing the likelihood that you’ll live longer better?

The first is exercise — even simply walking everyday, which he calls “the best medicine.” No surprise there. We all know how important physical activity is and Suzuki points to evolutionary evidence from the earliest hunter-gatherers. “We lived by moving every day to find our food and [today] we, in the name of convenience, do everything that goes against that.” Even something as simple as the invention of the remote control meant we no longer had to get up to change TV channels or turn the set on and off. “They figured that we gained two pounds a year just by not getting our asses off the couch.”

The second element is maintaining a healthy diet. Again, a no brainer.

The third element, and the one he calls the most important, is ensuring older people feel as though they have a purpose in life.

“And that’s hard,” Suzuki says, “because we tend to think of old people as a cost. ‘These goddamn old people are ruining the cost of our health program cause they need so much medical care.’ What we need as much as anything is to feel that we’re valued, that we have a role in society.”

He points to a karate class for senior citizens that he attends in the documentary and notes the value in not just the physical exercise, but the sense of community it breeds.

“And the community is as important to them, I felt, as actually doing the exercises. We need community. We need to belong.”

The Importance of Respecting Elders

Suzuki feels strongly about the idea of revering elders, citing indigenous communities as a shining example.

“I’ve gone into communities that are so messed up with problems of suicide and alcohol and obesity and just really dysfunctional societies. But when you go to a feast or some celebration, the elders are like rock stars.”

He believes that “we’ve lost that sense in the dominant society,” where we often regard elders “as a pain in the ass because they don’t know how to use all the new technology and they’re kind of bumbling. We’ve lost a sense of respect.”

He recalls a moment in the documentary when they put 51-year-old journalist and author Carl Honoré in an age simulation suit that produces a “worst-case aging scenario” by inflicting a hunch, joint pain and vision and hearing impediments. In an instant, the tall, healthy, spry 51-year-old transformed into a slow, disoriented, hunched octogenarian who required a cane to walk and barely navigated a simple set of stairs.

The sight of Honoré in the suit “filled [me] with shame,” Suzuki says. “I have passed so many old people that are crippled up like that, whether it’s loading up in an airplane and you kind of go ‘Oh, damn it, we have to wait for this person.’ So we look on them rather than thinking, ‘My God, they’ve lived a whole lifetime. They’ve got knowledge to share with us. We should talk to them.’”

The Fire in His Belly

Suzuki’s hosted The Nature of Things for 40 years and embarks on the show’s 60th season in September. In Aging Well Suzuki Style, he notes the importance of maintaining “a fire in your belly” as you age — a passion that drives one to remain engaged and active. For Suzuki, it’s environmentalism and science and spreading both via his broadcasting work.

“It’s a fire,” he says, “that’s fuelled by a tremendous sadness.”

For example, in March he’ll receive a Lifetime Achievement Award at the Canadian Screen Awards for his broadcasting work, but he explains that, “people come up to me and thank me for what I’ve done and I say ‘For what?’ I’ve done the best I could, but we’re going right over the cliff. I don’t feel that it’s had the impact.”

It’s difficult to spend your life fighting for a cause only to see the dire predictions you warned against begin to come true. Suzuki says he’s “in grief” and recalls a moment roughly a year and a half ago when he held his then-six-month-old twin grandchildren and broke into tears. “This never happened to me before. I just suddenly realized that all of the things that I’m saying are coming true and these kids don’t have a chance at living a full life.”

At 83, then, the fire within David Suzuki burns with determination to leave behind a healthy planet for his grandchildren.

“I’m just driven by the acceptance that this is where we’re going. I’m going to do everything I can to try to make a difference in how far we fall over that cliff and just celebrate that these twins have come into my life and are an absolute joy,” he says. That all I can do.”

David Suzuki: Untangling Alzheimer’s and a Family History of Dementia