Exploring the Great Houses and Halls of ‘The Crown’ 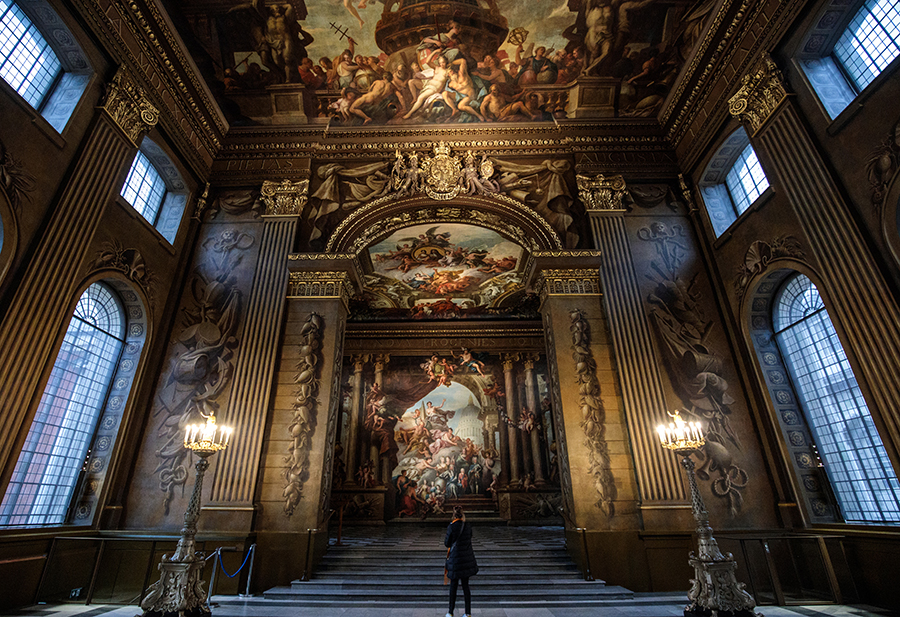 The newly restored Painted Hall inside the Old Royal Naval College is one of many stunning filming locations for the hit Netflix drama "The Crown" Photo: Jack Taylor/Getty Images

Palace intrigue. Crown jewels. Her Majesty. Diana. Thatcher. Oh my! But for us, it’s travelling around the U.K. like a royal. The backdrops and filming locations are equally the stars of The Crown, which launched its fourth season on Netflix last Sunday.

And since we may not be travelling right now, why not take a trip with us around Britain in pictures inspired by the television hit show? Don’t give up the dream. These are places you can actually visit, walk in the footsteps of royals and the actors that play the royals when we can safely take off again.

Pip, pip, cheerio! Here, just some of the fabulous filming locations around Britain used in season 4.

Burghley House is used as a stand-in for Windsor Castle.

And it has a Canadian connection! The Tudor mansion near Stamford, Lincolnshire, was built by Queen Elizabeth I’s Lord High Treasurer, William Cecil, also known as Lord Burghley and the 1st Marquess of Exeter (the 8th Marquess of Exeter, Michael, lives with his family in Canada but takes an active interest in all manner of business at Burghley). The house is considered a testament to the ambition and vision of the most powerful courtier of the first Elizabethan age. Burghley House will be running a series of special events throughout 2021 to celebrate 500 years since the birth and lasting legacy of Cecil.

A stay at the Burghley Estate puts visitors within walking distance of the House at the Dairy, which can be separated into two houses, each sleeping 10 people.. Other stays on the Burghley Estate include quirky luxury rooms at The William Cecil, glamping  or the stylish pub rooms at The Bull and Swan. You can visit all of the state rooms and more now, with an interactive virtual tour.

Also known as Somerledetuna, to use the Norse name, it has been a recorded homestead since the Vikings settled the country’s eastern coast. Now, the house, located at the borders of Suffolk and Norfolk (where Sandringham is also located) is privately owned, but it does open to the public for a short season each year (April to end of September).

Part of the Somerleyton Estate, The Duke’s Head gastro-pub restaurant is renowned for a flavoursome, seasonal menu, while The Fritton Arms is a comfortable lake-side gastropub (and boutique hotel) serving a creative menu of locally sourced food.

Ardverikie House in Scotland stands in for Balmoral Castle, the Queen’s home when she spends her summers there.

The Ardverikie Estate was used to recreate hunting, fishing and shooting scenes. Ardverikie House’s interiors and exteriors were shot for Balmoral Castle. The 19th-century Scottish baronial house is in the Scottish Highlands and is remarkably similar to the real thing, offering  fantastic views of the surrounding rolling hills and mountains. As a visitor to the estate, you can hike in unspoiled wilderness, dense forests and sandy lochs where the ever-changing weather will connect you with the landscape before you retreat into one of the cosy self-catering cottages. Exclusive tours of the main reception rooms of Ardverikie Castle are available to see inside a family home that has remained largely untouched  since it was built in the 19th century as the ultimate expression of Victorian Gothic splendour.

Wilton House Built on the site of a ninth-century nunnery, Wilton House (above) with more than 22 acres of parkland and gardens is home to the 18th Earl and Countess of Pembroke. The Annual Antiques Fair is hosted there in March – check back for the 2022 date (cancelled for 2021).

Lancaster House is a neo-classical mansion that was commissioned by the Duke of York in 1825. It’s rarely open to the public but does sometimes open its doors at the annual Open City event or you can see it through a virtual tour.

Old Royal Naval College is an extraordinary cultural destination in the heart of the Maritime Greenwich UNESCO World Heritage Site. The recently restored Painted Hall is the highlight of any visit to the Old Royal Naval College. Painted in the early 18th century by Sir James Thornhill, the hall features 40,000 square feet of walls and ceilings covered in striking paintings depicting 200 figures including kings, queens and mythological creatures. The Painted Hall reopened in 2019, following a two-year-long award-winning conservation project.

For those who can’t visit, there is a new free 360-degree virtual tour. This online tour offers the chance to explore this magnificent Baroque masterpiece from the comfort of your own home.

Moor Park Mansion is a Grade 1 listed Palladian building, set within more than 300 acres of landscaped Hertfordshire parkland. Originally built in the late 17th century for the 3rd Earl of Bedford, Moor Park Mansion has had various renovations and extensions over the centuries to become the building it is today. Moor Park was opened as a golf club in 1923. Nowadays, Moor Park Golf Club continues its ownership of the nansion and grounds and has complimentary guided tours throughout the year organized by the National Association of Decorative and Fine Arts Society volunteers.

Balmoral Bound: Season 4 of “The Crown” Turns Up the Drama of Real-Life Royal History On the Scottish Estate