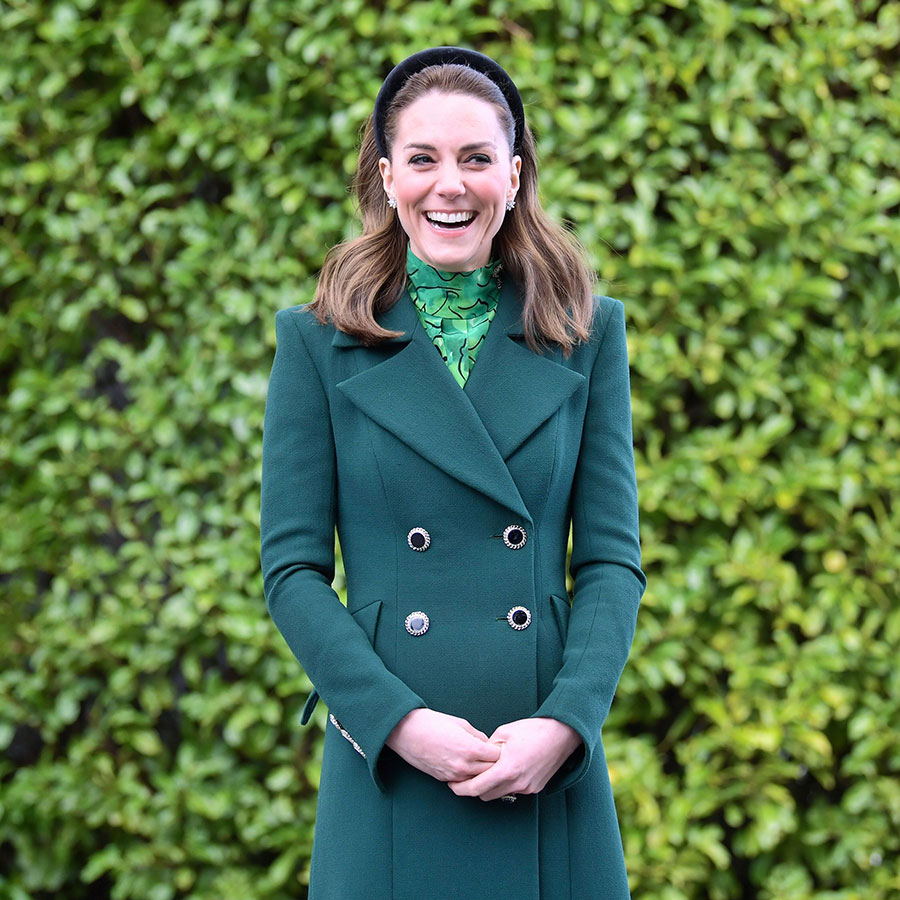 As Catherine, Duchess of Cambridge, arrives with Prince William in Dublin for a three-day tour of Ireland — diplomatically wearing Emerald Isle green — she is growing into her role as future queen.  Photo: Samir Hussein/WireImage

Before Kate married her prince, society wags, aghast at her middle-class background (with the surname Middleton, at that), circulated a snide aside about the future queen and her sister, Pippa. They were dubbed the “wisteria sisters — highly decorative, terribly fragrant and with a ferocious ability to climb.” And the British Royal Family should thank their lucky crown jewels for that.

The messy royal dawn of 2020 has become the backdrop for the rise of Catherine, Duchess of Cambridge, as a force in her own right. As Britain’s monarchy is roiled by resignations, scandal and divorce, Kate has stepped up to provide smiling, confident ballast to the entire enterprise.

Today, as she embarks on a royal tour of Ireland as part of Prime Minister Boris Johnson’s post-Brexit royal charm offensive, get ready for the deluge of photos that will chronicle her every hairdo and hemline.

But we will also be witnessing the emergence of a woman of confidence and grace. Kate has taken on the heavy mantle of her destiny with maturity, restraint and the sure footing that are the hallmarks of her grandmother-in-law’s long tenure as sovereign. We even see a hint of the steely resolve and mastery of public relations the Queen Mother displayed along with her hats and pearls during the abdication crisis and the Blitz.

Prince William, second in line to the throne, was born to be king. But Kate, a commoner, had to grow into her royal role. We’ve watched as she evolved from shy and nervous Waity Katy — savaged by the British tabloids for the interminable time it took Prince William to propose — to blushing royal bride to earnest young mother. Now approaching 40 and the mother of three royal heirs, she has carved out a role beyond William’s photogenic plus-one and has found her voice. It was only last fall on a diplomatically crucial tour of Pakistan that Kate gave her first TV interview — about a Lahore charity for orphaned children — since her engagement to William in 2010.

Kate followed that up with her first podcast appearance, a surprisingly in-depth reveal that showcased her warm, funny and self-deprecating side.

It was perfectly timed to put an exclamation point on the first public health program she initiated on her own. (Heads Together, which promoted mental-health awareness, was done under the auspices of The Royal Foundation in 2016 along with William and her brother-in-law, Prince Harry.)

Kate’s initiative, 5 Big Questions, is a survey designed to get public feedback on the challenges of raising young children and underlines how she has made child development her signature humanitarian focus. Her tour around the British Isles to launch it showed how smart she and her team have been about positioning her natural rapport with “littles,” as she is known to refer to the younger set.

On the podcast “Happy Mum, Happy Baby,” Kate opened up to U.K. author and actress Giovanna Fletcher for more than 30 minutes about her difficult pregnancies, which were plagued by hyperemesis gravidarum. She admitted mom guilt is a “constant challenge” — royals, they’re just like us — and, in a revelation that landed her on the cover of  People magazine, shared how she felt “slightly terrified” the day she appeared on the hospital steps with Prince George just hours after giving birth in 2013. She went on to say it was  “really important” to “be able to share that joy and appreciation with the public.”

Note here how Kate deftly spins the Queen Mother’s “Never complain, never explain” adage for our social media age. She has done both, but with a strategic understanding that her responsibilities trump her needs. This demonstration of how a royal can show vulnerability without self-pity — because, you know, privilege — has earned her another moniker, Relatey Katie.

It was bestowed by members of the fashion press for the way Kate recycles her wardrobe and frequently wears inexpensive clothing, but it is also the alchemy that allows her to escape the resentment of her less well-heeled subjects who have not forgotten she is the granddaughter of a coal miner. Kate is spotted buying toys at a discount store,  picking up groceries and doing the school run. So what if she lives in a palace and employs a nanny who dresses like Mary Poppins?

In the Public Gaze

In hindsight, it is clear that 5 Big Questions was the end of a savvy rollout that started with a children’s garden Kate co-designed for the Chelsea Flower Show in 2019, which garnered a visit from the Queen. Pictures of the Cambridge children cavorting among the flowers was Kate’s intent come to life. But did she use wisteria?

“As children, we spent a lot of time outside, and it’s something I’m really passionate about,” Kate told Fletcher in the “Happy Mum, Happy Baby” podcast. “I think it’s so great for physical and mental well-being and laying foundations.”

The duchess’s interest in early childhood development, particularly her conviction that children need to explore nature and get fresh air for their mental and physical well-being, is just the sort of cause that will have  universal appeal and deflect criticism that she is too political or too woke.

But refusing to engage in more topical issues makes its own statement.  At the 2018 BAFTAS, of which Prince William is the president, attendees were asked to wear black in solidarity with the #metoo and Time’s Up movements to eradicate sexual harassment.  In a widely criticized move, Kate appeared on the red carpet in a green dress wth a black sash.

When it comes to royal women under the public gaze, Kate’s focus on early child development is unlikely to impress Man Booker award-winning author Hilary Mantel, whose historical fiction is set in the Tudor court. In a 2013 lecture entitled Royal Bodies, Mantel said, in the early days, Kate was a “shop-window mannequin with no personality of her own, entirely defined by what she wore.”

Unlike Diana, “whose human awkwardness and emotional incontinence showed in her every gesture,” Mantel said Kate appeared “precision-made” and predicted that, once she gave birth to Prince George, the press would dress her in more “threadbare attributions” as a “radiant” mother, whose “only point and purpose being to give birth.”

Although Kate, an avid amateur photographer who has until now trained her lens mainly on her children – and created many of the official portraits of George, Charlotte and Louis – has moved on to more serious territory, pivoting recently from matters of life to those of death.

In late January, Kate, the patron of the Royal Photographic Society, marked the 75th anniversary of the end of the Holocaust by inviting two survivors and their families to Kensington Palace where she took pictures of them for an upcoming memorial exhibit to open later this year.

Kate told People magazine her subjects were two of the most “life-affirming” people she has had the privilege to meet. “The harrowing atrocities of the Holocaust, which were caused by the most unthinkable evil, will forever lay heavy in our hearts. Yet it is so often through the most unimaginable adversity that the most remarkable people flourish.” Adding that their stories will stay with her forever, she said that photo projects like hers are necessary as “it is vital that their memories are preserved and passed on to future generations.” After a London service marking the liberation of Auschwitz, she told survivors she and William had started talking to their eldest son, George, about the atrocities of the Holocaust, where six million Jews were murdered.

At the service, Kate spoke with 12 more Holocaust survivors, as well as survivors of genocide in Rwanda and Darfur. Her front and centre, hands-on engagement this year shows a new Kate, ready to use her platform to make a difference in the world. She wisely keeps the focus on serious subjects, never on herself.

Now Kate is digging even deeper, adding nuanced layers to her good works, giving them a grittier, more real-world feel.

She has doubled down on women’s issues by job-shadowing nurses and midwives, in much the same way Diana was in the operating room when heart surgeons saved a young boy from Cameroon who was brought to London by a charity Diana supported called Chain of Hope. Unlike Diana, who was accused of using the surgery as a photo op, Kate’s visit to a Pakistan maternity hospital and the three days she spent witnessing health-care workers at a London maternity ward were widely praised. Kate was moved to write an open letter to the women who help new mothers and babies get the best possible start in life. “You are there for women at their most vulnerable; you witness strength, pain and unimaginable joy on a daily basis,” Kate wrote in the Dec. 27 letter.

Kate’s rise has been a slow, steady and carefully managed build and, now that her maternity years are behind her, she is ready for this next step. It does show that, by listening to Palace advisers, Kate and William have had the support of the full royal machine.

Stepping up the frequency and profile of their royal duties (including a rare couple’s appearance with Charles and Camilla earlier this month in Loughbrough) is seen to be a sign the monarchy is shining the spotlight on direct successors to the crown and signals a business-as-usual approach to the public.

Kate is showing wise judgment (and likely some good palace courtier training) in rising above the fray and has become a major thread in the family’s narrative. To whit, the Queen appointed her a Dame Grand Cross of the Royal Victorian Order, the highest rank in a form of chivalry personally granted by the sovereign, to recognize her service.

She has none of the animus toward the press and the royal rota that record her every move; if she does, at least she doesn’t let it show. Kate may or may not be actually happy, in the way that we will never know if the Queen is happy. It appears the Cambridge marriage is solid, their children are well-adjusted and that is important to the whole family’s image right now. Duty is family and family is duty for Kate, just like the Queen before her. Kate is doing a remarkable job of all of her many jobs and managing all of it with a big, winning smile.

Prince Andrew at 60: The Road to Royal Redemption Is Long