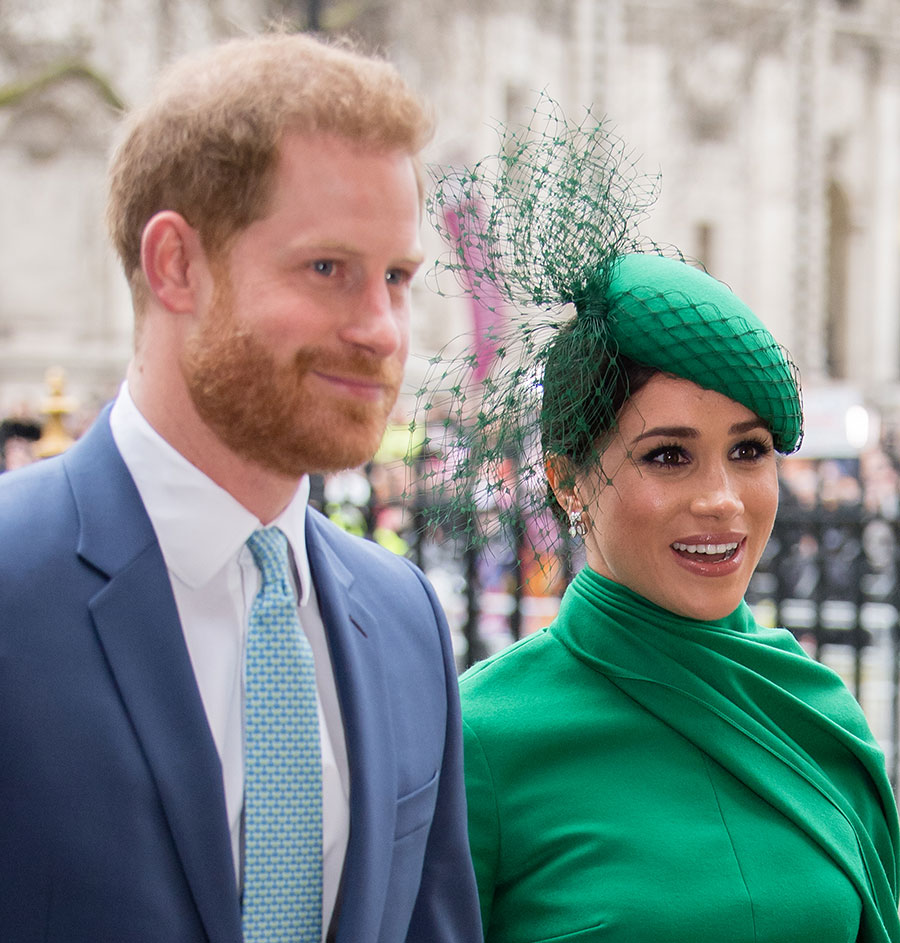 As they approached their last day as working royals, Harry and Meghan left a final post on their Instagram account, which will be deactivated along with other online spaces using the Sussex brand. Photo: Samir Hussein/WireImage/Getty Images

Sussex Royal is no more. Today is the last day for Their Royal Highnesses, The Duke and Duchess of Sussex, as senior working royals. And yesterday, in a lengthy post, Prince Harry and Meghan Markle announced @sussexroyal, their buzzy Instagram account, will be deactivated. This is the very account from which, in January, they blindsided The Firm, prematurely announcing a half-in/half-out plan to continue working as senior royals while pursuing private commercial ventures.

Their website, sussexroyal.com, developed without the knowledge of the palace staff while the couple and their son, Archie, were ensconced in a loaner mansion on Vancouver Island, will no longer be updated. This is where they laid out their doomed plan to “carve out a progressive new role” within the monarchy, on the presumption they could do so while splitting their time between England and North America. And it was where they signalled their grievances after the plan was decisively squashed by the Queen, who was never going to let the Crown lose a public game of brinkmanship.

The defiant Sussexes opted for a hard Brexit with a pomp-and-circumstance downgrade. Most crucially, they are no longer allowed to style themselves as HRHs. The Sussex Royal Foundation will wrap up its activities. And going forward, they cannot use the royal appellation for their new charitable venture or any future branding activities.

“As we all find the part we are to play in this global shift and changing of habits, we are focusing this new chapter to understand how we can best contribute,” read part of their last post, simply signed Harry and Meghan. “While you may not see us here, the work continues.” It was announced earlier this week that the Sussexes had hired a philanthropic heavy hitter, Catherine St-Laurent, to act as chief of staff and executive director of their yet-to-be-named non-profit venture. A Montreal native, St-Laurent was poached from Pivotal Ventures, Melinda Gates’ women- and family-focused foundation, where she was director. Before that, she was the senior communications officer for the Bill and Melinda Gates Foundation.

But for now the Sussexes intend to lie low. In a statement yesterday, a spokeswoman said they “will spend the next few months focusing on their family and continuing to do what they can do safely and privately to support and work with their pre-existing commitments while developing their future non-profit organization,” adding that “for now, there will no be no additional information on their next steps.”

Except now we know that we’ve entered the California Dreamin’ phase of “The Ballad of Harry and Meghan.” Last week, a report in People magazine had them leaving Canada and moving to Meghan’s home state, slipping in before the border was closed due to the COVID -19 pandemic. The couple confirmed the news after U.S. President Donald Trump randomly tweeted on Sunday night that the United States would not pay for the family’s security detail.

“The Duke and Duchess have no plans to ask the U.S. government for security resources. Privately funded security arrangements have been made,” was the couple’s pointed response. It also put to bed the far-fetched rumour that Harry would claim diplomatic status in order to warrant Secret Service protection. It’s now understood that Prince Charles will privately foot part of the bill, although it is unclear whether England’s Metropolitan Police will continue to shoulder some of the burden as Harry’s change of status has also meant the loss of his designation as an Internationally Protected Person.

But was there more to the self-described counter-puncher’s tweet – a far cry from Prime Minister Justin Trudeau’s “You’re among friends” post – when it was revealed last December the Sussexes were holed up here? And what of the couple’ s curt response? In 2016, despite an Instagram friendship made in influencer heaven with Ivanka Trump, a pre-Prince Meghan told talk show host Larry Wilmore that she would make Canada her permanent home if “divisive” “misogynistic” Trump was elected. The president returned fire, making headlines prior to his controversial 2019 state visit to Great Britain by calling the pregnant Duchess “nasty,” the insult he mostly aims at women of colour, be it journalists or Congresswomen.

Meghan, who is biracial, has lived with even more duality since she married Harry at Windsor Chapel in 2018. In a strategic grace note, she wore a five-metre long veil embroidered with the national flowers of the 54 Commonwealth countries. Following the ceremony, which surprisingly leaned into African-American culture, the Queen hosted a luncheon reception on the Windsor Castle grounds where Elton John serenaded the couple with his hits. One of them, “Tiny Dancer,” begins with the lyric “Blue jean baby, L.A. lady,” a nod to the bride’s California roots.

It’s no surprise that the family would end up in the city where Meghan grew up and where Archie can be close to his grandmother Doria, who is often photographed there out walking her dogs. And, optically, they no longer have to maintain a dutiful Commonwealth base. They can seamlessly slide into the land of convertibles, organic smoothies and secluded Montecito estates.

California, with its dream factories of Hollywood and Silicone Valley, is the place where strivers go to seek fame and fortune. Like Diana before them, a toxic level of fame has homed in on the couple like the heat-seeking missile it is. But to achieve financial independence – so they are not subject to the strictures of a taxpayer-funded life – has always been the end game. Harry and Meghan now live in the natural habitat of the institution they actually want to be part of – the one percenter club of “woke” global do-gooders. (Who knew that Harry and Meghan were that close to George and Amal Clooney and Oprah, who were surprise guests at their royal wedding with ostentatiously good seating?)

It’s the same town, but a world apart from the Hollywood that Meghan sprung from.

Her estranged father, Thomas Markle, an Emmy-winning lighting director and director of photography on television shows like Married With Children, introduced Meghan to the business. She paid her dues for years doing bit parts (with a particularly memorable stint as a briefcase girl on Deal or No Deal) before her big break – a lead on the hit series Suits, which took her to Toronto. And she returns to L.A., where she and Harry will be represented by the P.R. and strategy firm Sunshine Sachs, with a new, much more elevated gig under her belt.

Harry’s caught-on-tape moment last summer at the London première of The Lion King, where he was heard pitching Meghan for voice-over work to Disney chairman Bob Iger, has resulted in Disneynature’s Elephant. The original movie narrated by Meghan starts streaming on April 3 to coincide with Earth Month and, according to the trailer, is about a “family’s extraordinary 1,000-mile journey across Africa on an adventure that will change their lives.” Voiced in London last fall, Meghan’s fee was a donation to the conservation organization Elephants Without Borders, which the couple worked with when they travelled to Botswana in 2017.

Watch the trailer for Elephant below

Ever since Mark Twain had Huck Finn “light out for the territory,” California has also been a place that looms large in the imagination for freedom and reinvention. Or in the Left Coast’s self-help vernacular, the freedom to find yourself and live your truth à la Don Draper in Mad Men’s series finale. This royal ending began with an explosively frank and vulnerable interview Harry and Meghan gave to journalist Tom Bradby last fall. While Harry confirmed a rift with his brother, Prince William – imagine being called his spare all your life! – the Duchess of Sussex admitted to a deep unhappiness. Paraphrasing the poet Maya Angelou, she said, “It’s not enough to survive something, right? That’s not the point of life. You’ve got to thrive, you’ve got to feel happy.” She went on: “I really tried to adopt the sensibility of a stiff upper lip. I tried. I really tried. But I think what that does internally is probably really damaging.”

For Harry’s part, he has said this upheaval and rupture was necessary to protect his family from vile tabloid attacks (“Harry’s Girl, (Almost) Straight Out of Compton,” a reference to the notorious gang-riddled L.A. neighbourhood, was one of the racist and untrue headlines Meghan has had to endure) and clearly from dynastic family politics. The Queen, for her part, has said the Sussexes will always be valued members of her family.

With her heir, Prince Charles, testing positive for the coronavirus (he is now out of isolation and free of his mild symptoms) and the Queen herself in isolation with Prince Philip, there was hope that Harry and Meghan would temporarily return to the fold to help alleviate William and Kate Middleton’s burden. But Harry and Meghan had already said goodbye to it all that earlier this month.

During a fly-by across the pond for their last round of official duties, Harry was resplendent in a military uniform he will no longer be able to wear, tearing up during an ovation from fellow veterans. Meghan dazzled with a series of sublime fashion moments. Rich with symbolism, an instantly iconic photograph of the pair smiling at each other in the rain ricocheted around social media and made the front pages. It was pure glamour, in its ancient sense of casting a spell, showing the generally dour House of Windsor exactly what they will be missing.

The couple will continue to do their duty but in their own way and in time. “Thank to this Community – for the support, the inspiration and the shared commitment to the good of the world,” their @sussexroyal sign-off post read. “We look forward to reconnecting with you soon.” Harry and Meghan, peace out.