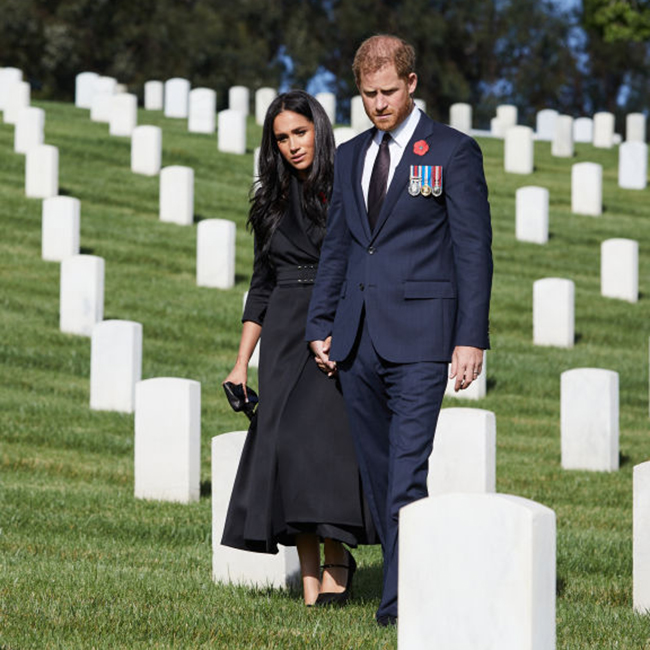 Prince Harry, who served ten years in the British army, marked Remembrance Sunday privately by visiting the Los Angeles National Cemetery to pay respects to fallen Commonwealth soldiers, including those from the Royal Canadian Artillery and the Royal Australian Air Force.

Joined by his wife, Meghan Markle, the royal couple laid flowers they picked from the garden of their Santa Barbara home. They also placed a wreath at an obelisk in the cemetery that features a plaque which reads ‘In Memory of the Men Who Offered Their Lives In Defence Of Their Country’.

Prince Harry reportedly signed a message with the wreath saying: “To all of those who have served, and are serving. Thank you.”

The private tribute in LA comes after Buckingham Palace refused the prince’s request to have a wreath of poppies laid on his behalf at the Cenotaph, the national memorial to armed forces in central London. He had made the request because pandemic travel restrictions prevented him from travelling to Britain.

According to a report in The Sunday Times, which broke the story, the reason Prince Harry was turned down was because he no longer represents the royal family. The Duke and Duchess of Sussex stepped back from their duties as senior royals in March.

Some commentators say the refusal is yet another sign of the rift between Harry, 36, and the royal family. But The Times reports the Queen was not made aware of her grandson’s wish.

Prince Harry, who served two tours of Afghanistan, made a surprise appearance on the military podcast Declassified, where he talked with other veterans about the lasting impact of his time in the military — when he was known as Captain Wales.

“Once served always serving, no matter what,” he told podcast host Michael Coates. “Even when we can’t all be together, we always remember together.

“Remembrance Day for me is a moment for respect and for hope,”he added. “Respect for those who came before us and hope for a safer world. The act of remembering, of remembrance, is a profound act of honour. It’s how we preserve the legacies of entire generations and show our gratitude for the sacrifices they made in order for us to be able to live the lives we live today.”

Although officially stripped of his honorary military titles when he stepped away from senior royal duties, Harry continues to remain patron for the Invictus Games Foundation, which he created in 2014 for wounded, injured or sick armed services veterans and personnel from around the world to compete in a variety of sports.

Meanwhile, in scaled-back remembrance ceremonies at the Cenotaph in London’s Whitehall on Sunday, the royal family reunited for the first time since Commonwealth Day in March. In keeping with coronavirus pandemic guidelines, social distancing measures were in place and, for the first time, the service was closed off to the public. Instead, people around the U.K. privately paid their respects at home.

Missing too were the thousands of veterans and members of the military  who normally march past the Cenotaph after the wreath-laying, with less than 30 veterans attending this year. Still officials emphasized the importance of the tradition of remembrance to continue. “In this time of adversity, no virus can stop us from honouring their memory, particularly when we have just celebrated the 75th anniversary of victory in the Second World War,” Prime Minister Boris Johnson said before the ceremony.

The Queen, dressed in a black hat and coat, observed from a balcony at the Foreign and Commonwealth Office, while politicians and members of the royal family, including Prince Charles and Prince William, laid wreaths following a two minute silence. The commemorations remember the sacrifices British and Commonwealth soldiers and their allies who fought alongside the UK in two world wars. Annual remembrance ceremonies are typically held in London and in smaller services throughout the country.

Earlier this week, Her Majesty, 94, wore a face mask in public for the first time, when she made a private pilgrimage to the grave of the Unknown Warrior in Westminster Abbey to mark the centenary of his burial. Face coverings are required by law in England in certain indoor settings, including places of worship. In addition to the Duke of Sussex, other royal family members not in attendance include the 99-year-old Prince Philip as well as Prince Andrew, who has stepped down from royal duties amid his controversial friendship with the late Jeffrey Epstein.