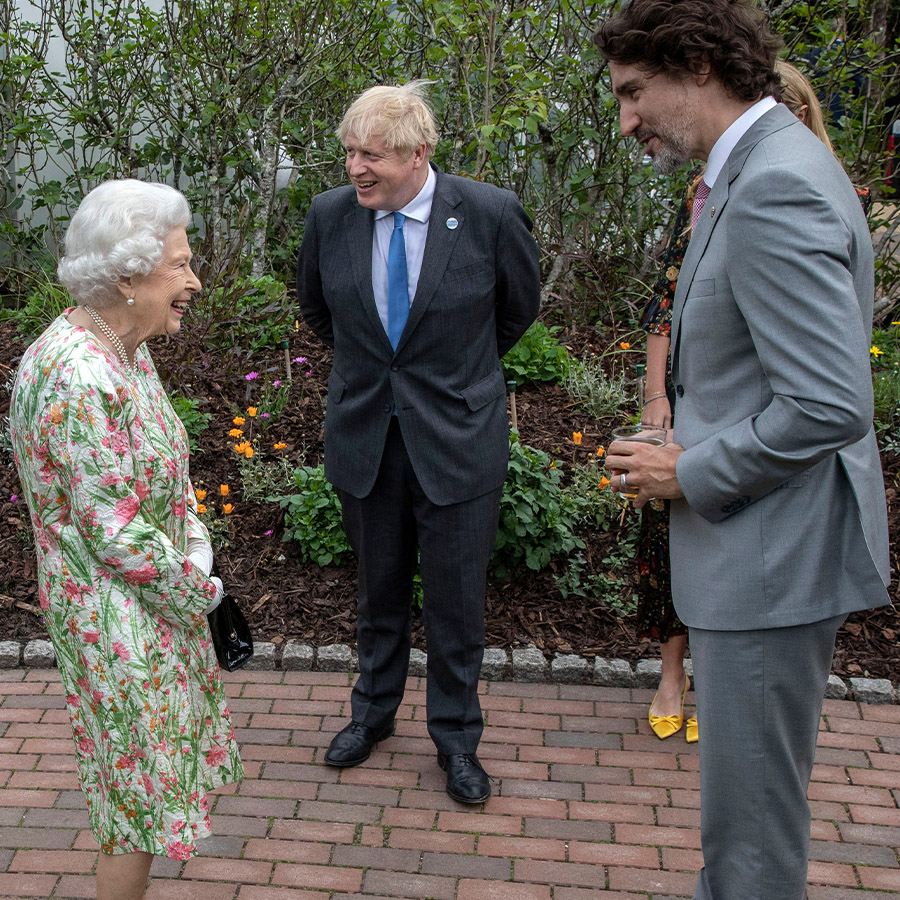 Prime Minister Justin Trudeau (R) speaks with Queen Elizabeth (L) at a reception with G7 leaders at The Eden Project in Cornwall on June 11, 2021. Leaders from Canada, France, Germany, Italy, Japan, the UK and the United States are meeting this weekend for the first time in nearly two years. Photo: Jack Hill/POOL/AFP/GettyImages

Britain’s Queen Elizabeth met U.S President Joe Biden and other world leaders under the canopy of the world’s largest indoor rainforest on Friday as she hosted a reception for leaders of the Group of Seven richest nations, who are holding a three-day summit.

Her Majesty held an audience with Prime Minister Justin Trudeau via a video call ahead of the conference. In a tweet on the official @RoyalFamily account, she shared a photo of herself and the PM from 2017.

The 95-year-old monarch was joined by the other senior members of the Royal Family, with son and heir Prince Charles and his wife Camilla and grandson Prince William and his wife Kate also present.

It was their first major public event together since the funeral in April of Prince Philip, the Queen’s husband of more than seven decades.

At the reception, held at the Eden Project, whose distinctive bubble-like Biomes house thousands of plant varieties, the Queen met Biden as U.S. President for the first time. He is 13th American leader she has met during her record-breaking 69-year reign.

Video: The Telegraph. Toward the end of the clip Her Majesty can be seen chatting with Trudeau.

“Joe and I are both looking forward to meeting the Queen,” Biden’s wife Jill, who joined him at the Eden Project event, had said on Thursday. “That’s an exciting part of the visit for us.”

They are also due to have tea with the monarch at Windsor Castle on Sunday after the summit has concluded.

Following a photocall with the Queen, Prince Charles addressed the G7 leaders about his Sustainable Markets Initiative, which aims to involve business and private sector investment in government efforts to combat climate change.

“The fight against this terrible pandemic provides, if ever one was needed, a crystal-clear example of the scale, and sheer speed, at which the global community can tackle crises when we combine political will with business ingenuity and public mobilization,” the prince told them.

“Ladies and gentlemen, we are doing it for the pandemic. So if you don’t mind me saying so, we must also do it for the planet,” said Charles, 72, who has spent much of his life campaigning on environmental issues.