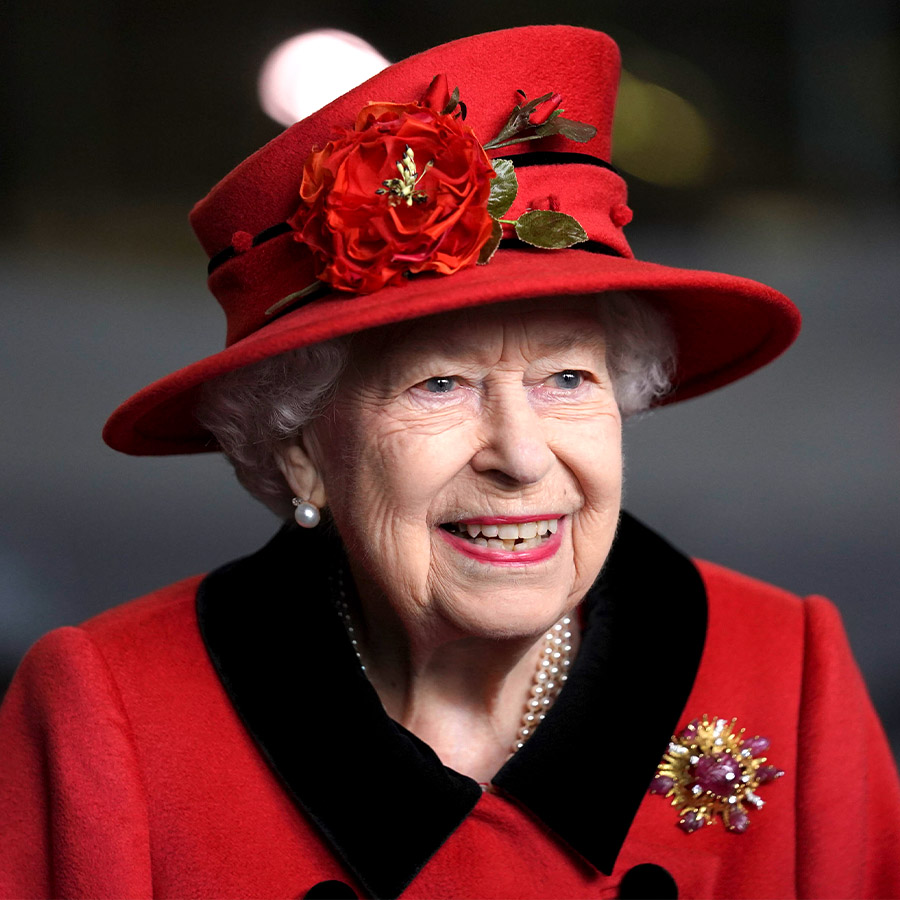 Silver summit: This weekend, Queen Elizabeth, who at 95 is the oldest serving British monarch, will meet with the oldest elected U.S. President, Joe Biden, 78. Her Majesty is pictured here during a visit to HMS Queen Elizabeth ahead of the ship's maiden deployment on May 22, 2021 in Portsmouth. Photo: Steve Parsons/WPA Pool/Getty Images

Queen Elizabeth II is back at work with a busy weekend ahead. The monarch, who just welcomed her 11th great-grandchild, her namesake Lilibet, and planted a new breed of rose named for her late husband, Prince Philip, will celebrate her official birthday on June 12 with a scaled-down Trooping the Colour at Windsor Castle on Saturday. Then on Sunday, she will welcome her 13th American President when Joe Biden arrives with his wife, Jill, for a private meeting, with just a touch of royal ceremony involving a joint inspection of the guards in their scarlet finery, again at the Windsor Quadrangle.

The Queen has embraced technology over the pandemic, and it was via video conference that she was able to “meet” Harry and Meghan’s new California-born daughter. But the meeting with President Biden will follow a well-worn traditional script. At 78, Biden is the oldest of the American Presidents she has welcomed. Prior to their meeting, she will have met with 12 American leaders during her long reign the only president she did not meet is Lyndon Johnson a claim no one else in the world can make. At 95, the Queen herself is the oldest serving monarch. So this silver summit — most likely over tea — marks a celebration of their joint experience in international relations.

The invite was issued by Buckingham Palace for a meeting to take place after the G7 summit in Cornwall concludes; the meeting with the Queen will likely be a pleasure for the president, ahead of his showdown with contentious Russian President Vladimir Putin in Switzerland on June 16. Britain has a potent diplomatic asset in the Royal Family and they intend to flex it this week for the all-important summit in the wake of Brexit. Queen Elizabeth and senior members of the Royal Family will join the international leaders and spouses for dinner Friday evening, an enticing invite sure to bring out powerhouse glamour and everyone’s best manners. Prince Charles met with international business leaders to put the focus on climate change at this conference, and the upcoming COP26, which is also to be held in Britain.

And in a meaningful photo op, Jill Biden met with the Duchess of Cambridge to tour an elementary school in Cornwall and discuss the importance of their shared passion for early childhood education.

The visits with both the Queen and Putin will be very different for Biden than for his chaotic predecessor, Donald Trump, whom Biden refers to obliquely as “the former guy.” Trump, whose visits to see the Queen for tea in 2018, for a state dinner in 2019 and for a NATO leader’s reception, also in 2019, were accompanied by protests from the British people, along with the famous giant helium Baby Trump flying in the skies over London while he was there. Trump famously walked in front of the Queen while inspecting the troops, after having arrived 15 minutes late for tea. (One simply does not leave Her Majesty waiting.)

(There was also the small incident at the NATO reception when Princess Anne was seen laughing with world leaders Emmanuel Macron, Boris Johnson and Justin Trudeau, when Trudeau was caught on a hot mic gossiping about Trump’s odd behaviour.)

Biden, while prone himself to verbal gaffes, has charted a mostly smooth oratory course since taking office. His meetings with the Queen are likely to go according to plan. It will be Biden’s first meeting with Her Majesty, but he has previously met with Prince Charles, who came to Washington in 2015 when Biden was vice-president. He also met Prince Harry when he and President Obama came to Toronto for Harry’s Invictus Games in 2017. Biden did stick his diplomatic neck out when he recently commented about Meghan Markle’s Oprah interview, saying via his press secretary, Jen Psaki, that the duchess speaking out about her mental health struggles took “courage.”

Ahead of his meeting with the monarch, Psaki said of Biden’s reaction: “Who among us wouldn’t want to meet the Queen? They issued, of course, a graceful invitation, which he certainly accepted. He’s looking forward to seeing her, and Dr. Biden as well.” A state dinner invitation is likely to follow at a later date; the Queen hosted both George W. Bush and Barack Obama for state dinners during their terms. The Obamas enjoyed a warm relationship with her grandchildren, William and Harry, and even met the third in line to the throne, Prince George, in his bathrobe at a private meeting at William and Kate’s home in Kensington Palace.

The flurry of engagements for the Queen as she re-enters public life after a period of mourning are scaled-down because of the pandemic; the Trooping of Colour on Saturday, which she will attend with her cousin, Prince Edward, Duke of Kent by her side, will be much smaller than the usual crowd-lined parade through the streets of London, culminating in the family gathering on the balcony of Buckingham Palace for the Air Force flyover. In pre-pandemic times, this was typically a big fashion event, with the men and women in the family who hold honorary military titles dressed in full regalia and the women who do not dressed in smart dresses and matching hats. The modified version to take place this year will be contained in the Quadrangle of Windsor Castle, ending with a 41-gun salute to the monarch.