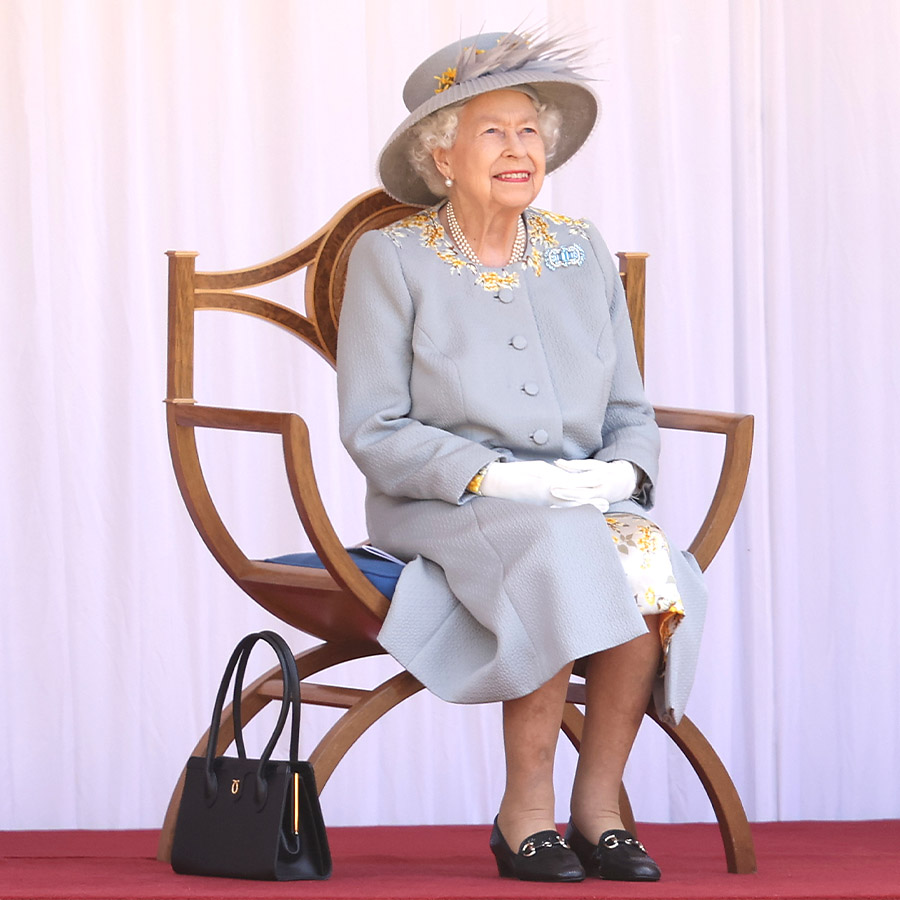 The Queen seemed determined to reassure the nation, and the world, that she is a head of state back from the mourning period for her husband. Here, her Majesty attends a military ceremony to mark her Official Birthday on June 12, 2021 at Windsor Castle. Photo: Chris Jackson/Getty Images

The Queen made a show of strength, wit and charm over the weekend, from cracking jokes with the G7 leaders, to wielding a sword for some cake-cutting duties and then for tea and ceremony with the new American president. Deploying broad smiles, sunny floral dresses and well-timed improvisational one-liners the Queen seemed determined to reassure the nation, and the world, that she is a head of state back from the mourning period for her husband.

One day after what would have been Prince Philip’s 100th birthday on Thursday, the Queen led a very special royal delegation to host the leaders of the G7 and their spouses at a reception and dinner at Eden Project in Cornwall on Friday. With flawless timing, right before the photo bulbs began to click for a group picture, she asked, sotto voce, “Are you supposed to look as if you are enjoying yourself?” A wonderful line that had the somewhat staid group —grappling with the awkward complexities of Brexit and a global pandemic and economic fallout thereof — laughing aloud.

On quite the roll that same day, the Queen, accompanied by Camilla, Duchess of Cornwall and Catherine, Duchess of Cambridge, also stopped by an event for The Big Lunch volunteers, who are in the process of planning the Platinum Jubilee celebrations for next year. Handed a giant ceremonial sword to cut a giant cake, the Queen demurred when Camilla told her a knife was available instead. “I know there is,” she ad libbed. “This is something that is more unusual.”

There were more broad smiles throughout the course of the weekend than we have seen in a long time from Her Majesty. Proving that industry is indeed the enemy of melancholy (to borrow from William F. Buckley), the Queen once again set an example for us all, an anxious world grappling with grief, loss and the torpor of more than a year of our lives on hold. She leads, once again, by example. She is not just carrying on, but showing us how to find the joy in the small things in life.

On Saturday, officially celebrating her birthday, she was photographed beaming broadly at the modified Trooping the Colour military parade, caught on camera at times tapping her pumps in time to the music. She attended the event, a celebration in honour of her birthday, with her cousin, Prince Edward, Duke of Kent.

In an admirable display of stamina and duty, the Queen carried on Sunday with yet another public appearance, this time receiving Joe and Jill Biden for tea. This was a meeting of the oldest serving monarch of Britain with the oldest ever president of the United States, at ages 95 and 78, respectively. Joe from Scranton did not bow to Her Majesty (he is not a subject, so that is not required nor expected), nor did Jilly from Philly (that’s First Lady Dr. Jill Biden to you) curtsey. But they looked engaged and happy, Joe with his signature aviator sunglasses for part of the ceremony (before the national anthems were played), Jill in a crisp baby blue Adam Lippes suit, and the Queen in another fresh spring floral, this time with a peony pink background.

Ever the diplomat — the Queen has made it strict policy to never show her feelings about politicians of any party, anywhere, save that time she looked at her watch pointedly when President Trump was late for tea in 2018 — she chose a favourite brooch for the occasion. Now, this is important because also on that Trump visit there was chatter that the Queen was trolling Donald by wearing a brooch given to her by the Obamas. This time she went for a safe choice, the Jardine Star brooch, which is known for its many stars, which is an easy symbolic bridge to the U.S. flag. She has worn the brooch for visits by both Bush father and son, and now for Biden, making it a Republican and Democratic gesture.

But lest anyone think the Queen is getting soft, Joe Biden let it be known the conversation over tea went well beyond pleasantries. He told reporters gathered that the Queen had asked about Xi Jinping and Vladimir Putin. This was technically a breach of protocol, as one is not supposed to reveal what is said in an audience with the Queen. But we are glad he did reveal that the Queen is still as keenly interested in geopolitics as ever. Biden, who is prone to gaffes, went on to call the Queen “Very generous.” He also said, “I don’t think she’d be insulted, but she reminded me of my mother. In terms of the look of her and just the generosity.” Well, the Queen is only 16 years older than the American president. The Queen is indeed the matriarch for our times, and we get the reference, and the fantasy. But she proves once again with this remarkable bounce back and energetic series of appearances that her wit, her sharp mind and her understanding of the power of her soft diplomacy are as persuasive as ever.