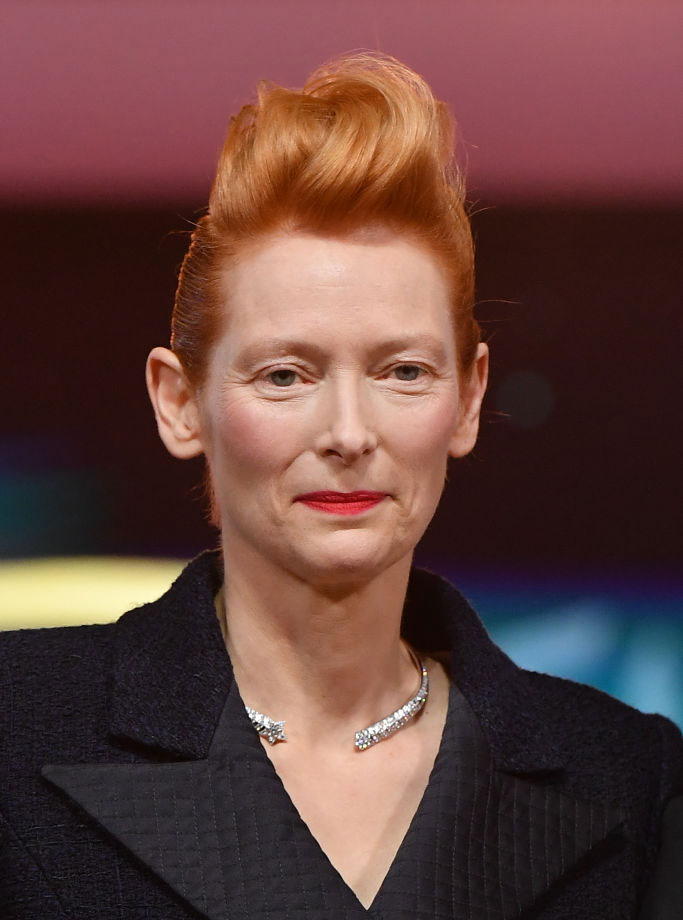 Actress Tilda Swinton, 59, goes for a boyish and ultra cool look by slicking back the side and going for a full pompadour top. Photo: Stephane Cardinale - Corbis/Corbis via Getty Images

It was television’s most iconic red-haired beauty, the late Lucille Ball, who said, “Once in his life, every man is entitled to fall madly in love with a gorgeous redhead.”

Entitled or not, the odds are not great since redheads are a rare breed. About two per cent of the world’s population has the genetic mutation that results in natural red locks, although there are millions of impostors out there.

Women blessed with flame-coloured hair are viewed as temperamental, wild, wanton, even dangerous. Throughout history, because of their small numbers, they were deemed evil and vilified as heretics.

Even in pop culture today, the red-headed beauty is a symbol of this archetype. The wildly popular television show, Game of Thrones, famously featured several redheads, including the witch Melisandre and the wildling seductress Ygritte.  Even one of the Bible’s central female figures, Mary Magdalene, has been portrayed as a redhead and cast as a “sinful woman.”

Today, stereotypes associated with the auburn-haired have been dismissed, although research has shown the recessive gene responsible for red hair is also involved in the regulation of pain, which means redheads really are  more sensitive to pain.

The club for siren-haired beauties got a public relations makeover back in the 1500s thanks to the Italian Renaissance painter Titian, who depicted women – including the Virgin Mary – with long, lustrous auburn hair. And fashionable and wealthy Venetian women took their cues from his paintings and changed their hair with natural dyes such as saffron and turmeric. In England, Elizabeth I proved to be a hair influencer of note after her decision to display her natural golden-red hair set a trend, with courtiers dying their hair and beards to match.

There was one man who allowed himself to fall madly in love with gorgeous redheads and made his adoration for red hair in the most public manner. The Pre-Raphaelite painter Dante Gabriel Rossetti’s sensual works in the 1800s often featured pillow-lipped, voluptuous women with long-flowing scarlet hair. But since this was the restrained Victorian era, no one was skipping through the meadows with strawberry-coloured hair flowing in the wind. The models in his paintings were his obsession and lovers – he even married one named Elizabeth Siddal.

Perhaps Lucille Ball understood the mystique and lure of the redhead best. After all, she was not a natural redhead. A dye job changed her life and ignited a career that left legions of fans in love with her.

That’s the thing about redheads: they are timeless and ageless. Scroll through the gallery below for an inspiring look at a select group of stylish women over 50 who refuse to let the red fade.

Her comedic chops have earned her comparisons to Lucille Ball,  but neither actress is a natural redhead. While Ball kept her signature siren hue throughout her career, she didn’t vary her style. But Messing has rocked red hair in an array of styles, from tight curls to sleek and scraped back. Seen here at a Tribeca Film Festival event in New York City last April, the Will and Grace star lets her fiery hair flow in waves below her shoulders.

Hard to believe there are two redheads in the small cast of the Will & Grace sitcom, and they don’t clash. But then again, no two shades are alike. Seen here at last year’s Vanity Fair Oscar party in Beverly Hills, co-star Mullally goes for a more sophisticated vibe by sweeping her hair up in a loose chignon.

She’s an actress and a huge country star, but she doesn’t go for the big hair. McEntire’s short hair always has volume, some waves and gentle bangs. The look is vivacious with the right amount of sass and works for her whether she’s in an evening gown or jeans and a T-shirt.

Not all redheads have to play the sexpot card. This hyper-talented actress goes for a boyish and ultra cool look by slicking back the sides and going for a full pompadour top. The look might be bold and dramatic, but it has that Swinton signature of studied simplicity.

If you’re blessed with a full head of red hair – and in your 70s – let it flow freely. You can never miss this legendary Vogue fashion editor in the front row all because of her flaming red hair, which always seemed to be amplified and fanned out from her face. She has made it her signature look, turning her voluminous hair into an auburn cloud worthy of a Titian painting.

This award-winning actress’s natural red hair has become her signature. She is also a natural when it comes to fashion and the red carpet, never afraid to take risks or to embrace edgier looks. Seen here at last year’s Golden Globes, she cuts a striking figure in a cream-coloured Givenchy Haute Couture gown and Chopard diamond earrings. But even more startling was the low ponytail. The result was modern and effortlessly glamorous, proving that a siren doesn’t always have to be a vamp.

This Swedish-born actress is living proof you can go from brunette to bombshell by changing your hair to red. It was a Hollywood hairdresser, who also turned Lucille Ball into a redhead, who convinced a young Ann-Margret to choose the hue, or so the story goes. Shortly after, she landed a role opposite Elvis Presley in the 1964 movie, Viva Las Vegas. The fiery hair colour, along with her voluptuous body, would cement her status as an enduring sex symbol. She has kept her hair strawberry blond to this day and has carved out a career as a serious actress, earning an Emmy Award, five Golden Globes and two Oscar nominations along the way.

Trust the French to show the restrained elegance of red hair. This legendary actress is wearing a dress with a pretty but powerful print at the announcement of the Cesar nominations (the French equivalent of the Oscars) this past January in Paris. Her outfit doesn’t need any more attention. Her red hair is gently pulled back, with a few tendrils framing her face.  The look is unfussy and youthful looking.

A Decade in Fashion: The Moments That Defined A “Greynaissance” In The 2010s