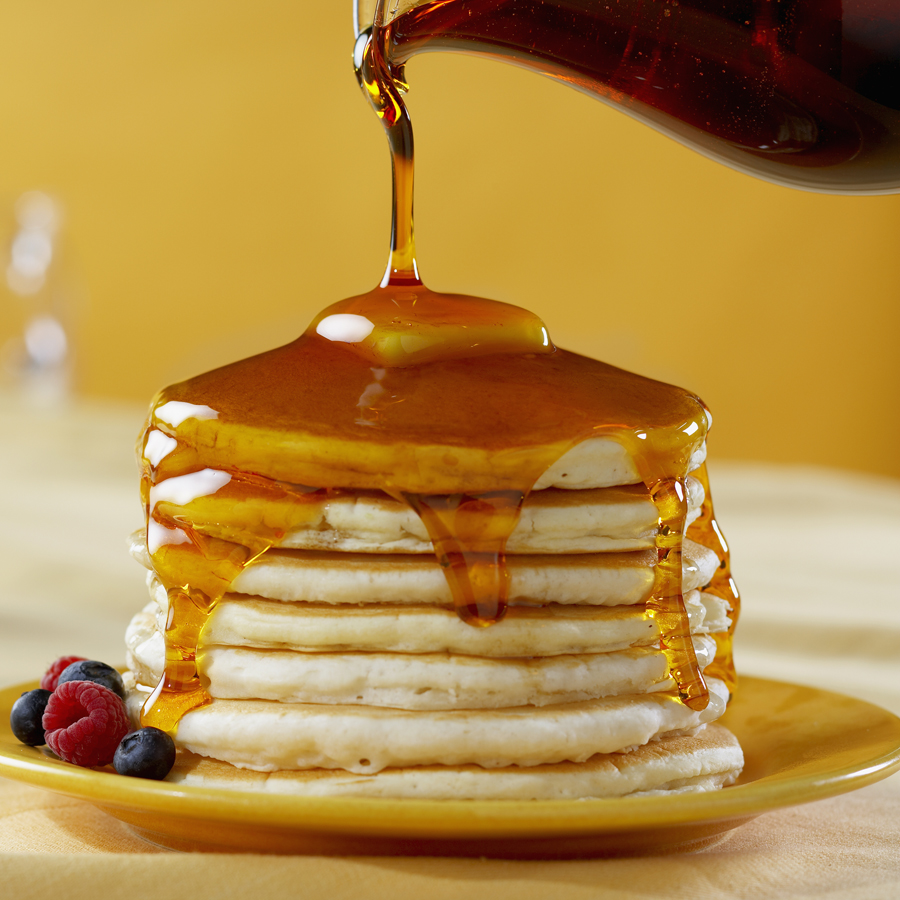 On Wednesday, Quaker Foods announced that, "We recognize Aunt Jemima’s origins are based on a racial stereotype" and promised a new name and packaging later this year. Photo: Lew Robertson/Stone via Getty Images

UPDATE: Since the news of the Aunt Jemima brand broke on Wednesday, the makers of both the Uncle Ben’s and Mrs. Butterworth’s announced coming overhauls to those products as well. Mars Inc., which owns the Uncle Ben’s rice brand,  noted in a statement that they “have a responsibility to take a stand in helping to put an end to racial bias and injustices” and that “we recognize that now is the right time to evolve the Uncle Ben’s brand, including its visual brand identity, which we will do.” No specifics or timetable for the changes were provided. And Conagra Brands, which owns Mrs. Butterworth’s syrup,  told Forbes that its packaging was meant to “evoke the images of a loving grandmother” but that “we understand that our actions help play an important role in eliminating racial bias and as a result, we have begun a complete brand and packaging review on Mrs. Butterworth’s.”

A week after HBO Max pulled Gone With the Wind from its streaming service for “depict[ing] some of the ethnic and racial prejudices that have, unfortunately, been commonplace in American society,” another hugely recognizable and equally problematic brand is getting an overhaul: Aunt Jemima.

Like Gone With the Wind, the 130-year-old syrup and pancake mix, which are tied to the famous image of “Aunt Jemima” in its branding, evokes a romanticized and stereotypical vision of the antebellum South and the “Mammy” character — a Black woman (often a slave) who happily served her kind, white masters.

In a statement provided to NBC News, Quaker Foods North American vice president and chief marketing officer Kristin Kroepfl, said, “We recognize Aunt Jemima’s origins are based on a racial stereotype. As we work to make progress toward racial equality through several initiatives, we also must take a hard look at our portfolio of brands and ensure they reflect our values and meet our consumers’ expectations.” NBC added that, “new packaging will begin to appear in the fall of 2020, and a new name for the foods will be announced at a later date.”

The Aunt Jemima brand also reportedly plans to donate $5 million to support the Black community over the next five years, following in the footsteps of the $400 million PepsiCo, their parent company, pledged on Tuesday.

The announcement of changes to the Aunt Jemima products comes two days after singer Kirby posted a video on TikTok called “How To Make A Non Racist Breakfast” in which he denounced the brandings’ racist history and ending with her pouring out a box of pancake mix while declaring “Black lives matter people, even over breakfast.”

The move also comes amidst ongoing global anti-racism protests following the death of George Floyd, which has caused a reckoning for countless brands and companies attempting to show solidarity with the protesters, make appropriate changes to their corporate culture and, in the case of Aunt Jemima, own up to the racism embedded in their products.

As calls for the removal of Confederate monuments and statues across the U.S. grow louder, the Aunt Jemima brand itself stands as something of a monument to the racist Southern stereotype in which it  is rooted — not a statue planted in a park or before a courthouse but, rather, a marker that lines grocery store shelves and kitchen cupboards. And the brand is so recognizable and ingrained in consumer culture that most consumers aren’t even aware of its origins.

The name “Aunt Jemima” comes from a 1875 minstrel show song called “Old Aunt Jemima.” Minstrel shows, of course, often featured white performers in blackface as racist caricatures and, as activist, actor and writer Sarah Doneghy wrote in a 2018 story entitled “Aunt Jemima: It was Never About the Pancakes” on BlackExcellence.com: “The song was based on a song sung by slave hands. ‘Old Aunt Jemima’ was performed by men in blackface. One of the men depicted Aunt Jemima — a Slave Mammy of the Plantation South.”

In a 2015 piece for the New York Times entitled “Can We Please, Finally, Get Rid of ‘Aunt Jemima’?” Riché Richardson, an author and associate professor with Cornell University’s Africana Studies and Research Center, noted that, “This Aunt Jemima logo was an outgrowth of Old South plantation nostalgia and romance grounded in an idea about the ‘mammy,’ a devoted and submissive servant who eagerly nurtured the children of her white master and mistress while neglecting her own. Visually, the plantation myth portrayed her as an asexual, plump black woman wearing a headscarf.”

The stereotype was reinforced by the character of “Mammy” that actress Hattie McDaniel played in Gone With the Wind (and for which she became the first African American to win an Oscar, for Best Supporting Actress), which is part of what led to the film being pulled from HBO Max temporarily until it returns with a discussion of the true historical context.

In 1889, entrepreneur Chris Rutt saw the Aunt Jemima song performed at a minstrel show and trademarked the name for his new flour brand. His company, however, didn’t last, and when he sold it to The Davis Milling Company an entire campaign was devised to bring “Aunt Jemima” to life.

That included, as Doneghy points out, hiring a 56-year-old former slave named Nancy Green to portray the character in person at live events like the 1893 Chicago World’s Fair.

“The Davis Milling Company constructed the world’s largest flour barrel to grab people’s attention,” Doneghy writes in her detailed history of the brand. “Then they put Nancy Green on display (much like the flour) and gave her an act. She dressed as Aunt Jemima, sang songs, cooked pancakes, and told romanticized stories about the Old South — a happy place for blacks and whites alike, now accessible only by nostalgia, or by buying Aunt Jemima’s pancake recipe.”

What followed was decades of tweaking and reshaping Aunt Jemima for television, print and radio, as well as merchandizing products — including after the Quaker Oats Company bought the brand in 1926 — using different actresses and models to build a breakfast empire rooted in the mammy character before attempting to distance the brand from its racist roots by redesigning the character’s look in recent decades.

In 1934, the film Imitation of Life, which has been selected for preservation by the U.S. Library of Congress, told the story of a Black mammy housekeeper character named Delilah who holds stark similarities to Aunt Jemima. Delilah gifts her family pancake recipe to her white employers, who then market “Delilah’s Pancake Flour” and make a fortune. The film was remade in 1959 starring Lana Turner as an actress and Broadway star and Juanita Moore as her Black housekeeper. Moore earned a Best Supporting Actress Oscar nomination for the role.

Quaker Foods may note today that they “recognize Aunt Jemima’s origins are based on a racial stereotype,” but there’s really no excuse for them not recognizing it sooner. The mammy character has been acknowledged as a racist stereotype for decades, and the Aunt Jemima character was called out as racist during the Civil Rights movement.

Doneghy notes that, “Local chapters of the NAACP began pressuring schools and fair organizers not to invite Aunt Jemima to appear. In 1967 the Quaker Oats Company canceled its television campaign and in 1970 they removed Aunt Jemima’s name from the Disneyland restaurant.”

As well, one of award-winning African American artist Joseph Overstreet’s best-known pieces is called The New Jemima, featuring the image of Aunt Jemima firing a machine gun that the Mississippi Governor’s Arts Award for Excellence in Visual Art called, “a national icon of the Civil Rights Movement.” And Overstreet, in an interview with the Tate Modern museum, noted that, “‘Mammy’ was one of the favorite stereotypes created by whites to control African Americans. Black folks were disgusted with these old, tired and exasperating ideas. In the new world of intergalactic space travel, New Jemima decided to take a stand.”

Meanwhile, in the early 1970s, artist Betye Saar created a piece titled The Liberation of Aunt Jemima by altering an existing mammy figurine.

“She had a broom in one hand and, on the other side, I gave her a rifle. In front of her, I placed a little postcard, of a mammy with a mulatto child, which is another way black women were exploited during slavery,” she explained on The Berkeley Revolution website. “I used the derogatory image to empower the black woman by making her a revolutionary, like she was rebelling against her past enslavement.”

So in light of that history, to suggest that Quaker only now recognizes Aunt Jemima’s racist origins seems questionable. Their own origin story on the company’s website leaves out any allusions to slavery, going so far as to omit Nancy Green’s early life as a slave and calling her a “storyteller, cook and missionary worker.”

And in 2014, two great-grandchildren of Anna S. Harrington, who portrayed Aunt Jemima after Nancy Green, sued The Quaker Oats Company asking for $2 billion and future revenues, claiming that the company “conspired to deny that Harrington had been an employee of Quaker Oats, all the while exploiting her image and recipes for profit, and refusing to pay an ‘equitable fair share of royalties’ to her heirs for more than 60 years,” according to The Chicago Tribune. The same story notes that the lawsuit “alleges a racial element to the exploitation of Harrington and the other women who portrayed Aunt Jemima, going so far as to accuse the company of theft in procuring 64 original formulas and 22 menus from Harrington.” The suit was eventually dismissed.

Today’s news concerning Aunt Jemima instantly began trending on social media. Writer and, diversity and inclusion advocate April Reign tweeted, “I believe in meeting people where they are and understand how hard growth is, especially in public spaces. However. Who did y’all think that was on the Aunt Jemima packaging? Like… you thought she was a shareholder in the company? A woman from central casting?”

Astrophysicist Neil deGrasse Tyson also took to Twitter and wrote, “It’s not that Aunt Jemima was a symbol of a racist past, she was the very embodiment of a racist past. She will not be missed by anyone who knew that.”

And Huffington Post front page editor Philip Lewis tweeted that, “It took 131 years to acknowledge that Aunt Jemima is based on a racist stereotype.”

He added, in another tweet, “So long, Aunt Jemima. Uncle Ben might need to get his affairs in order.”

On Hattie McDaniel’s Birthday, Gone With the Wind Temporarily Pulled From HBO Max

Why Willie O’Ree, the NHL’s First Black Player, Is More Relevant Than Ever