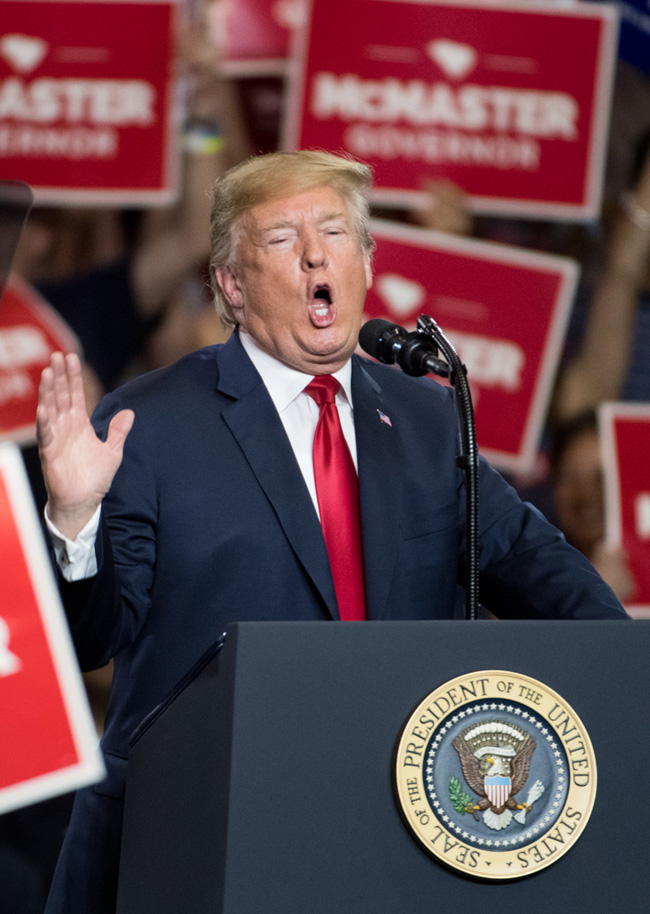 On Tuesday, President Donald Trump hit the campaign trail in North Carolina to deliver what was supposed to be a speech in support of South Carolina Governor Harry McMaster.

In an hour-long tirade in front of a friendly crowd, the president managed to work in his now obligatory potshots against Prime Minister Justin Trudeau and Canada’s “unfair” advantage in trade.

While there was nothing new in his remarks, it was the particularly rambling and incoherent delivery that made it an instant classic of Trumpian oratory.

Trump’s anti-Canada incantation, in which he references the now infamous G7 Summit fusillade against Trudeau, begins at 39:14. Or, read the unedited transcript below and try to decipher just what the hell the President Trump is talking about.

I got a bad hand with all these horrible trade deals. NAFTA is a disaster. Canada. You know Canada, nice guy, nice guy. Prime minister. Justin. I said, ‘Justin, what’s your problem, Justin?’ (Laughter) So, Canada. O Canada. I love their national anthem. O Canada. I like ours better, however. (Huge Cheers) So. No, Canada’s great, I love Canada. We had a wonderful understanding, you know that story. We hugged. We kissed. Everybody was happy. I made some changes in this ridiculous thing that everyone agreed to sign. I left, everybody was happy. I get on to Air Force One – he doesn’t understand that Air Force One has 22 televisions. They have televisions in closets, they have televisions in areas that no place have them. Unlimited budget, Air Force One, uh? (Cheers) So I get on the plane and I see Justin Trudeau … saying ‘Canada will not be bullied by the United States. I say, ‘What are we doing here?’ The fact is that Canada has a 275% tariff on dairy products, a little thing called dairy products. (Boos). Their lumber is a disaster. With us, I say, ‘Why aren’t we using our own lumber?’ Because now we’re actually allowed to take lumber from our fields and regrow it under our environmental system. In the old days you couldn’t do that. We had to go to other countries. So, lumber is a disaster. Energy is a disaster. And I see Justin saying: ‘We fought World War One together. We fought World War Two together.’ That’s true. We love Canada. But Canada’s charging almost 300% on tariffs on dairy products and many other things. It’s all working out great. It’s allllll working out great. And I said, ‘Look, if you want to do that, we’re going to put a little tariff on your cars.’ You know cars are the biggee. Cars are the biggee. (Extended rant about European Union trade barriers on U.S. automobiles) I want to be able to sell cars in there just as they sell cars in here. It’s all going to work out. It’s all going to work out. The fact is, we were given somewhat of a bad hand because we came in with all these problems. But I’m loving what we’re doing. You people are loving what we’re doing. (Huge Cheers).