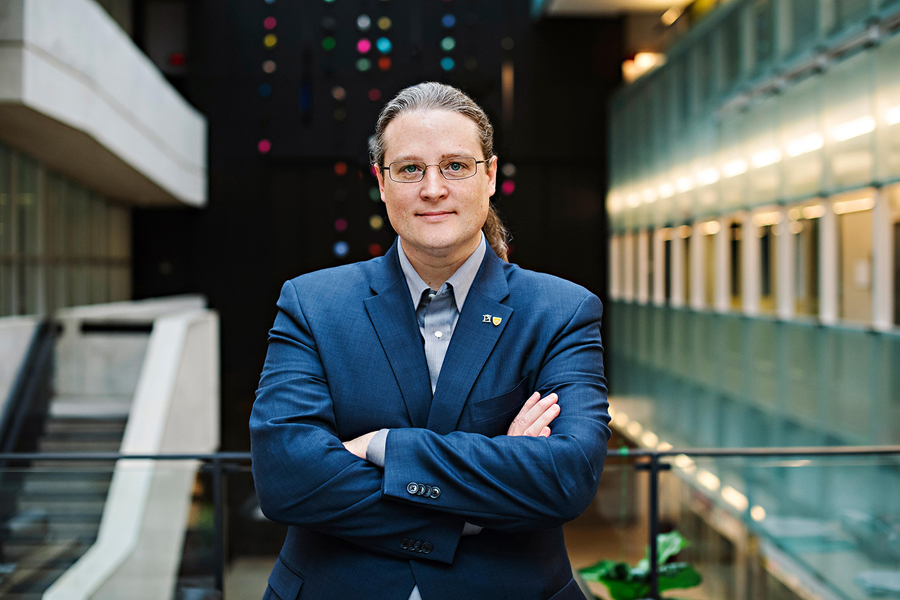 The 2020 ideacity conference may not be taking place due to the COVID-19 pandemic, but that doesn’t mean that the conversations and ideas stopped flowing. This week, on June 17, 18 and 19, ideacity is offering a free livestream replay of the 2019 conference — the 20th anniversary year — and all you have to do is click here to register. And on Thursday, following the free livestream, 2019 conference attendees can log on and join ideacity founder Moses Znaimer in conversation with Martine Rothblatt, creator of SiriusXM Satellite Radio & CEO of United Therapeutics.

To get you warmed up for the livestream replay, we’re revisiting some of our favourite stories from the 2019 ideacity conference. Today, we look back on our interview with Canadian astrophysicist Avery Broderick who, in 2019, helped produced the first-ever photograph of a black hole.

Avery Broderick hunts monsters in the night. And he recently helped capture a big one, 55 million light years away. The astrophysicist, who works as an associate professor at the University of Waterloo, served as one of the more than 200 international researchers whose combined efforts over the last decade produced the first ever image of a black hole in April.

“This is a line in the history of humanity — the first time we looked out and saw monsters in the night that were real,” Broderick said in a recent interview with Zoomer ahead of his talk at ideacity on June 20. “But here’s the thing. Even if you went into this one black hole and you knew its inside, you could never get back out and go to another black hole. Parts of the universe are clean cut off from them. And so … this kind of changes the flavour of space. It’s not a place of just wonders, but it’s also a place of terrors in which you can become enmeshed, stuck in, never to escape. So I think just for that reason it’s a moment in human history.”

Black holes are, “a place in space where gravity pulls so much that even light can not get out,” according to NASA, which adds that, “Because no light can get out, people can’t see black holes. They are invisible.”

Thanks to the plethora of science-fiction films and TV shows that depict them, most of us think we have an idea of what a black hole looks like. But the ground-breaking, real-life photo, which depicts, “the event horizon, a point of no return that absorbs anything that crosses it,” has been compared by some to the moon landing — which, coincidently, celebrates its 50th anniversary this year — in terms of a milestone that will help define space exploration for a generation. So how does it feel to be a part of that seminal event?

“That’s one of the driving factors of why I think many of us do this job,” Broderick says. “This small possibility that we are pushing forward the range of knowledge or the breadth of knowledge of humanity. And every now and again you make a step that’s significant and get to be part of the human story. And I think it’s an extraordinary privilege and an honour to be able to do that.”

RELATED: Rick Mercer Returns to ideacity for the First Time Since 2003

Broderick’s passion for space study stems from an urge to explore, which has propelled him forward since childhood. “If I were born 500 years ago, maybe I would have been on voyages around the world.” He says that, “black holes being the most extreme, most counter-intuitive thing that we knew about” made them “a very natural destination to try to reach.”

And now, in his work as an astrophysicist, “I go to a black hole or I go to a computer, to Event Horizon Telescope data, and I get to explore these extreme places and try to suss out how the universe is working around it. I think it’s just an extension of that desire [for] adventure.”

And Broderick believes the adventure, so to speak, is just beginning for humanity, with the image of a black hole possibly serving as the first step in what could amount to a chain reaction of progress that alters human existence.

RELATED: ideacity Turns 20: A Photo Gallery of 20 People Who Helped Shape the Event

“Black holes are the most extreme place to study. Better understanding of gravity will unlock a gravitational age, and I don’t know what that’s going to look like. But I do know that every time we do unlock another piece of the universe, it fundamentally changes how we interact with each other, how we interact with the universe around us, how we see ourselves,” he explains. “It fundamentally changes the human psyche, the human condition. And I can only expect that unlocking gravity will have a similar transformative effect. Not tomorrow, but in the future.”

And until the gravitational age is upon us, Broderick happily shares the knowledge he’s gleaned with a wider audience, like those who tune in to ideacity. “As I tell my students, science isn’t science until you’ve told someone,” Broderick notes. “You understanding a thing isn’t enough. You have to share it with other people.” He adds that societies contribute so much money and resources toward research like this that, “I think that we have a duty to not just tell people what they’ve bought, but also share with them why that’s exciting and allow them to be part of the process.”

So what message is Broderick hoping to bring to ideacity with his talk, “Seeing the Unseeable”?

“Some sense of the awe, the excitement and the future that this first image precedes that we are now entering this new period where questions that even a decade ago, we just assumed would only ever be answered by theoretical investigation … all of a sudden that has moved from the purview of theoretical physics to experimental verification. And the excitement of being here at the dawn of this new age … this period of excited development and opportunity in science and knowledge. And the fact that we’re at the beginning of that. That’s, I think, maybe the most interesting, important thing to communicate.”

Catch Avery Broderick’s ideacity talk “Seeing the Unseeable” on Thursday, June 20 by watching the ideacity live stream on the EverythingZoomer.com homepage. And click here for the full line up of ideacity speakers and talk times.