Richard Nixon’s Resignation and the Day the 1960s Really Ended 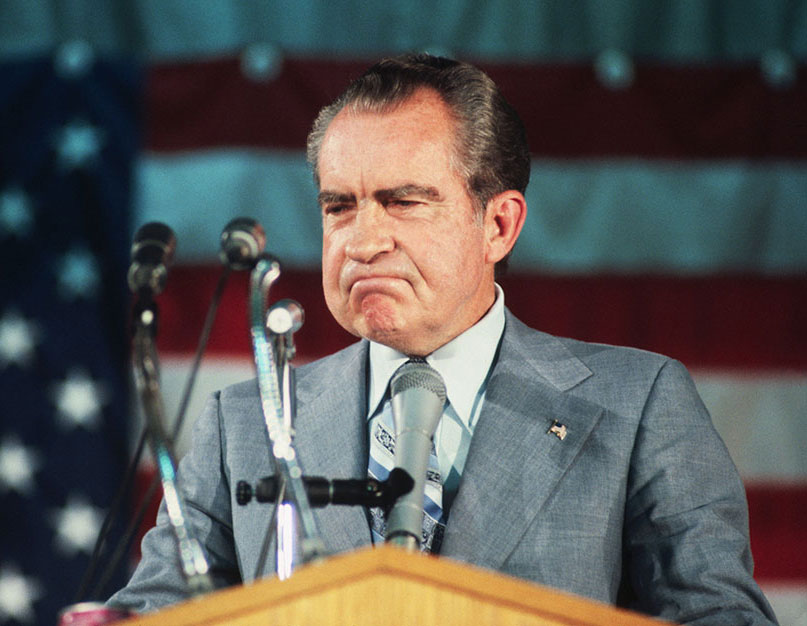 We are a base-10 number species, by dint of having 10 fingers. So, it’s natural that we expect our life passages to occur in neat increments of decades. But there’s a school of thought about decades that, culturally, they tend to end sometime in the next. The ‘80s ended with the election of Bill Clinton. The ‘90s ended on 9/11, etc.

When JFK was elected in 1960, it may have seemed of a piece with how society was changing, a government of the “Best and the Brightest,” a sophisticated, young, (sub)urban societal movement celebrated since by Mad Men and, at the time, by The Dick Van Dyke Show.

But on further review, the ’60s began on November 22, 1963, with Kennedy’s assassination. The shock that we lived in a world where anything could happen would be felt again and again. It would happen with the assassinations of Martin Luther King and Robert Kennedy, with thousands of young Americans dying in the rice paddies and jungles of a country most of them couldn’t find on a map, with protesters being beaten at the presidential convention of a major U.S. political party, with the general rejection of norms by the young and with the idea that larger forces were always at work.

That shock wouldn’t end on Dec. 31, 1969. Though much has been made of the Manson Murders and the Rolling Stones’ Altamont concert as the end of the “peace and love” era, you’d have to have a pretty narrow idea of the ’60s to think it was all about peace and love anyway (the Manson Murders happened the week BEFORE Woodstock, which puts the lie to the notion that the concert was the flashpoint of the Age of Aquarius).

“Sixties” things that happened in the ’70s included the Kent State shootings, the secret bombings of Cambodia, heiress Patty Hearst being kidnapped by a group calling itself the Symbionese Liberation Army and then joining them in a series of Robin-Hood-styled bank robberies, the Weather Underground bombings, the FBI’s illegal COINTELPRO war against the Black Panthers, and Coca Cola assembling young people of all colours on a hilltop to sing “I’d Like to Teach the World to Sing.”

Which brings me to the real end of the ’60s, which happened on August 8, 1974, 45 years ago this week — the announcement of U.S. President Richard Nixon’s resignation in advance of what seemed his certain impeachment over a “third-rate burglary” of the Democratic headquarters at the Watergate Hotel.

We tend to think of impeachment these days as a hollow gesture, given the nothing-burger that was Bill Clinton’s impeachment proceedings, as well as the impeachment of Donald Trump, which saw the president acquitted by a Republican-led Senate. But Nixon was considered toxic to his own Republican party, which turns out to make all the difference. Where there’s a will, there’s the doorway, Mr. President.

But Watergate itself wasn’t the end of the ’60s. Richard Nixon’s resignation marked the real end of the Vietnam War, the decade’s blood-spattered giant ape.

Nixon was the third President to have custody of the Vietnam War, a war he was elected to end, and one he instead took to the next horrible level. The War cast its shadow on nearly every part of American life in the ’60s. It blackened America’s eye for the first time since the Second World War, when it was celebrated as the world’s liberator and policeman.

The U.S. ceased fighting Vietnam in 1973 after declaring a hollow “Peace with Honor” and the last of its military would leave in panic with the fall of Saigon in 1975.

If the ’60s was a clusterfutz of people who thought they could make a difference in one way or another, the ’70s was defined by, as Jimmy Carter would later characterize it, “malaise.” Any joy or schadenfreude felt over Nixon’s humiliation was soon deflated when he was given a complete pardon for any alleged crimes by the unelected new president Gerald R. Ford.
In many minds, this merely confirmed the fix was in.

You want to see how the ’60s ended on film? Don’t look to the Stones at Altamont on Gimme Shelter (as great a documentary as that was). Watch the 1975 Warren Beatty movie Shampoo, directed by Hal Ashby and written by Beatty and Robert Towne. Set with the backdrop of Nixon’s landslide election in 1972, it is a portrait of glam Hollywood society, dedicated to all the right causes (and no small amount of hedonism) being slapped in the face by reality and Nixon’s “silent majority.”

In a country whose economy had been geared to its military, an oil crisis followed Nixon’s departure, with huge lines at rapidly emptying pumps. There was a new word coined by economists, “stag-flation” (meaning simultaneous periods of high unemployment and inflation), and an escapist popular culture, from disco to pet rocks.

In his weird, stiff way, Richard Nixon was the ’60s. He represented the rejection of the old when he was defeated for President by Kennedy in 1960. Eight years later, he represented the Establishment’s hard push-back against the rampant change the decade ushered in.

Nixon defeated flower power, for better or, mostly, worse, and truly ushered in the ’70s.

A version of this article appeared on EverythingZoomer.com in 2019.

The Summer of 1969: Eight Books that Shed Light on that Moment in Time