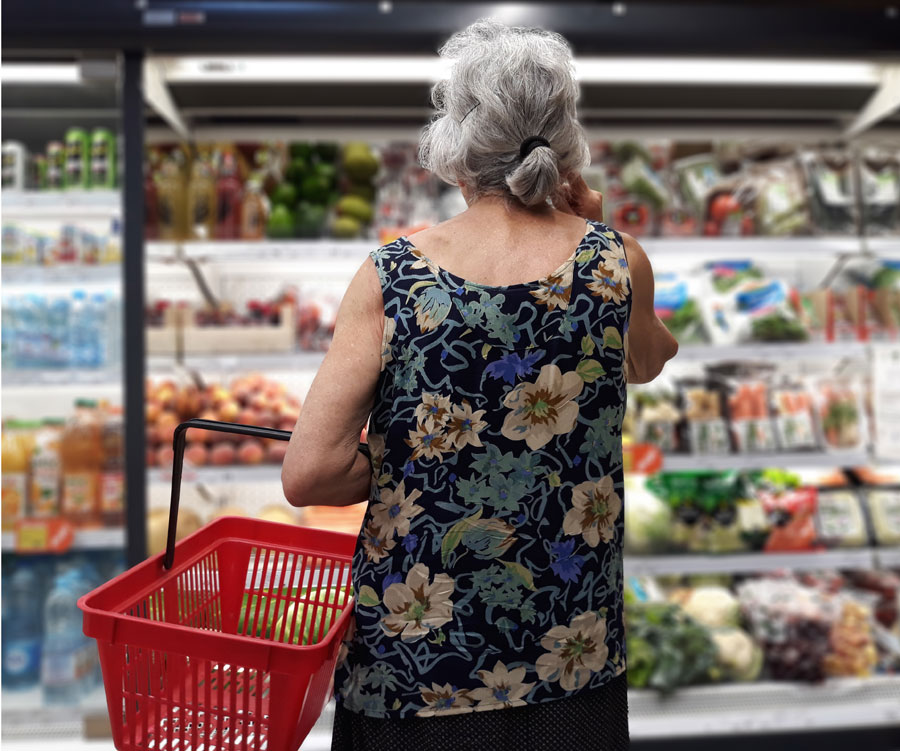 As our grocery bills rise, food banks are expecting to see an increase in the number of low-income seniors who rely on them. Photo: Jovo Marjanovic/EyeEm/Getty Images

Food prices will rise in 2020, says a new report released Tuesday, and it’s causing great concern for all Canadians but especially seniors who live on fixed incomes.

The 10th annual edition of Canada’s Food Price Report , released jointly by Dalhousie University and the University of Guelph, predicts that next year will see us paying up to four per cent more when we pay our grocery bills. The report expects that the all the basics will see a jump in price, including dairy (one to three per cent); fruit (1.5 to 3.5 per cent); bakery (0 to two per cent); vegetables (two to four per cent) and meat (four to six per cent). This food inflation means that the average Canadian family will be shelling out $487 more for food than they did last year.

The rise in food prices makes it difficult to follow the guidelines of the government’s recently updated food guide that instructs us to “have plenty of fruits and vegetables.” But if fruit and vegetable prices keep going up (as any shopper can attest, we’re already paying a steep price for these), many can’t afford to eat healthily.

This so-called “vegetable dilemma” — along with rising prices in all food groups — is bound to have a severe affect on seniors, especially those who live alone or on fixed incomes. In its recent HungerCount2019, Food Banks Canada found that 6.8 per cent of its users are seniors, a rate of increase “that has been far outpacing all other age groups over the last three years.”

“Seniors on fixed incomes or low-income wage-earners are particularly vulnerable to rising food prices,” says Marissa Lennox, Chief Policy Officer at CARP. “And, unfortunately, in order to afford food they too often will cut back in other important areas like medication.”

“Already, one in eight Canadian households is food insecure,” said Guelph project lead Simon Somogyi of the Gordon S. Lang School of Business and Economics. “The ever-increasing use of food banks across the country is an example of how Canadians can’t afford to put food on their plates.”

While the report blamed economic factors like trade tensions, energy costs and the weak Canadian dollar as playing major roles in driving up food prices, it pinned the blame on climate change as the biggest macro-economic factor.

“In 2020, the elephant in the room is climate change and its impact on our food systems,” said the report. It suggests that Canada’s food systems are being affected by changing weather patterns such as “droughts and forest fires, heavy precipitation, reduced freshwater access and rising sea levels.” Farmers, in turn, are having challenges dealing with the consequences of climate change: crop yields, heat-wave livestock threats, pasture availability and pest and disease outbreaks.

And while food prices keep increasing, our ability to pay for them isn’t. The report suggested that because of stagnant wages, a whopping 87 per cent of Canadians agreed that food prices were increasing faster than their household income. This anxiety was noted by Sylvain Charlebois, professor in the faculties of management and agriculture at Dalhousie, who was a lead on the project. “Eighty-seven per cent is quite substantial,” Charlebois said. “Food affordability is clearly an issue in the country.”

Food Fraud: How to Know When You’re Being Scammed