“His Legacy Is So Vibrant to Me.” Darrell Fox Remembers Brother Terry Fox on His Birthday 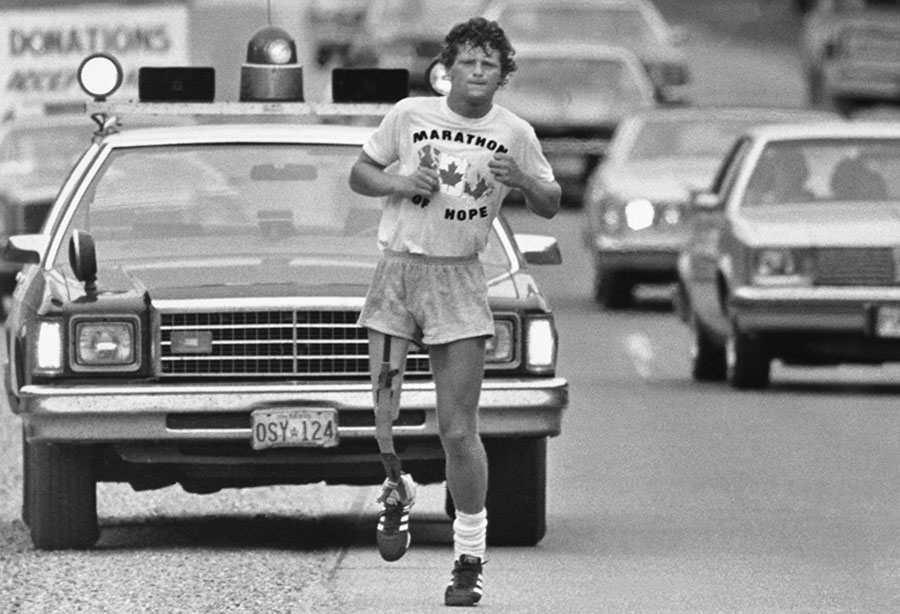 Terry Fox spent his 22nd birthday in Gravenhurst, Ont., where 2,000 people met him at the town’s Centennial Centre. The celebration saw Fox raise $14,000 in one day. Photo: Bettmann/Getty Images

Anniversaries are always difficult for the Fox siblings, because there are so many burned into their memories. Today, the day Terry Fox would have turned 62, Darrell Fox will be thinking of his big brother. But it will be a quiet contemplation.

“It’s hard because he’s not here, but he is here. That’s the challenge I go through all the time,” Darrell said in a July interview from his home in Chilliwack, B.C. “I look at that as being incredibly positive for me with the healing process and the mourning process. He’s not physically here, but gosh, he’s never old. To me, he’s still 22 and he’s still in some way running, because we’re all running for him still. His legacy is so vibrant to me.”

Darrell was remembering Terry for a story that appears in the September/October issue of Zoomer magazine — on newsstands Aug. 3 — about Forever Terry: A Legacy in Letters, a new book of essays coming out Sept. 1 on another significant anniversary. That was the day Terry had to abandon the Marathon of Hope outside Sudbury after his bone cancer returned, this time in his lungs. Not only was Terry running an average of 42 kilometers a day on one leg and a steel-and-fiberglass prosthesis, he was doing it with a tumour in each lung. “It was déjà vu,” says Darrell, 58, who was driving behind Terry in a motorhome and arrived at a rest stop to find out his brother had been taken to the hospital. “It was 1977 all over again, when Terry was first diagnosed with cancer, where he was quickly just accepting it and comforting me, as opposed to me comforting him.”

Terry later said that last kilometer was the hardest, because he realized he needed to stop, but there were people lining the highway and cheering him on. So he ran until there were no more fans.

Forty years ago today, Terry Fox spent his 22nd birthday in Gravenhurst, Ont., where 2,000 people met him at the town’s Centennial Centre to celebrate, raising $14,000 in one day. One of his gifts was a new artificial limb. He was 277 kilometers away from the halfway point of 4,430 km in his run from St. John’s to Vancouver, which he marked seven days later near Sudbury.

His goal was to raise $1 for every Canadian – or $24 million – a milestone he reached in February 1981, just four months before he died. All told, the Terry Fox runs organized in his name each September have raised more than $800 million, including Terry’s initial $24 million. Today, the money raised by the Terry Fox Foundation is disbursed to the Terry Fox Research Institute, which allocates grants to top cancer researchers across Canada.

Darrell joined Terry and his best friend Doug Alward in Saint John, N.B, in May, 1980, and was with him every step of the way until Sept. 1. Even after Terry was flown home to B.C. in a private jet, Darrell says he planned to finish the run, assuming he would beat the bone cancer that resulted in the 1977 amputation of his right leg 15 centimetres above the knee.

Terry didn’t even take the sock off the foot of his artificial leg, he was that optimistic he would be back on the road again.

“He never removed it. It was never washed during the Marathon of Hope,” Darrell says, adding that Terry was so worried that his mom, Betty Fox, would try to wash it or throw it out that he hid it.

“It was only in late December that he actually did remove it, because he accepted his fate and what was about to happen,” says Darrell. “It was mom who found it … after Terry had passed away, in the back of his sock drawer.”

Betty, who died in 2011, saved the memento, along with boxes and boxes of letters, postcards and gifts from fans, which are all kept in an archive at the volunteer-run Terry Fox Centre in Vancouver.

“Back in 1980, people wanted to think and reflect and share thoughts with Terry, so they sent things — mementos, letters, cards — to mom and dad,” Darrell says, adding that there are 70,000 items in the collection. “Big kudos to mom for recognizing the value, because they wouldn’t be around if it wasn’t for mum protecting them and making sure they were okay.”

Today, Darrell says he and his older brother Fred, 63, and younger sister Judith, 55, will “keep to ourselves.” But they never forget the selflessness, altruism and the drive that set their brother on a path to greatness. Although he was a hero to Canadians, Terry Fox did not think of himself that way. He was moved to raise money for cancer research after seeing patients — particularly the younger ones — fighting the same fight as he endured 16 months of chemotherapy.

“It took cancer to realize that being self-centred is not the way to live,” Terry once said. “The answer is to try and help others.”

Darrell says what sticks with him the most are Terry’s speeches at the stops along the Marathon of Hope, even though he heard them hundreds of times and the message was always the same. Although Terry never shared what he went through during 16 months of treatment, it pained Darrell to hear him speak about others who were losing their hope and their battles with cancer, because it was Terry’s story, too.

“That’s where it hurts me a lot, because it helped me understand what Terry was going through,” says Darrell.

“ I can say the last time I was as emotional as the first time, because he spoke with sincerity … There are so many things I admire about Terry, but that’s the one that I really, really admire, is just he believed so much in what he was doing.”

Terry Fox, 30 Years into His Legacy of Hope