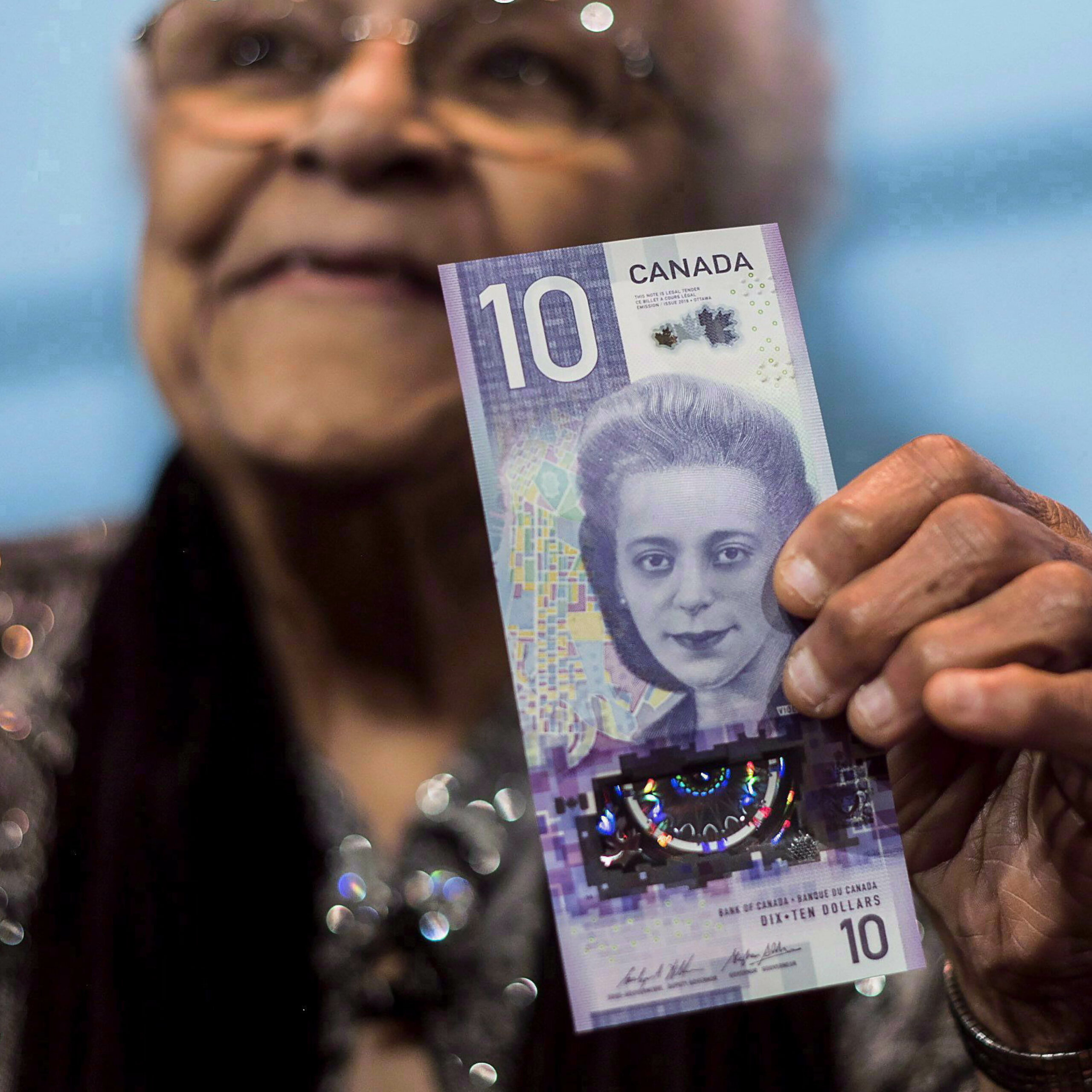 This week, Nova Scotia repaid a fine it issued to civil rights activist Viola Desmond in 1946, a symbolic apology for the province's racist past. The fine was repaid to Desmond’s sister, Wanda Robson, seen above holding a Canadian $10 bill with Desmond’s face on it in 2018. Photo: Darren Calabrese / The Canadian Press

As part of its Black History Month observations, the government of Nova Scotia is repaying a fine it issued to Viola Desmond 75 years ago, a symbolic apology for the mistreatment it showed toward the legendary civil rights champion and other members of the province’s Black community.

On Wednesday, Premier Stephen McNeil took steps toward righting a grievous wrong when he held a virtual ceremony to present a $1,000 cheque to Desmond’s sister, Wanda Robson – a repayment for a fine it levied in 1946 against the Black activist for her refusal to abide by Nova Scotia’s ugly segregation rules.

The incident that caused Desmond to be ticketed, a sordid reminder of Nova Scotia’s racist past, happened in November 1946 after Desmond’s car had broken down.

Then 32, Desmond, who ran a popular hair salon that served clients from Halifax’s Black community, was on her way to Sydney, N.S., to sell her successful line of beauty products. But when car problems interrupted her trip, she decided to pass the time until it was repaired by catching a  movie at the nearby Roseland Theatre in New Glasgow.

The trouble started when Desmond purchased a ticked for the balcony but, because of her poor vision, decided to move to a seat closer to the screen. Unknowingly, she was now sitting in a section reserved for white patrons. When an usher requested that she move back up to the balcony, she refused to do so, realizing that the request was racially motivated.

The police were called, and Desmond was forcefully arrested, spent the night in jail and was issued a $26 fine on the trumped-up charge of defrauding the government through tax evasion. (The Crown argued that because the original balcony seat cost 30 cents and the seat nearer the screen cost 40 cents, Desmond should be fined for defrauding the government of one cent in tax revenue.)

Following her arrest, Desmond joined forces with church members and community advocates to file a lawsuit against the theatre for its illegal racial segregation policy. However, the suit was eventually turned down because the judge insisted it was not a civil rights but a tax evasion issue, and Desmond was forced to pay the fine.

After the court dismissed her claim, Desmond, who by then was running a school that trained young Black women in the hopes they would open their own beauty business, moved to Montreal and subsequently to New York, where she died in 1965.

Later, recalling Desmond’s brave fight against racism, her lawyer William Pearly Oliver suggested that her “positive stand enhanced the prestige of the Negro community throughout the province” and that “much of the positive action that has since taken place stemmed from this.”

Over the years, Desmond has become a civil rights hero in Nova Scotia as well as receiving national acclaim for her fight against segregation. In 2012, she was celebrated with her own stamp, and her face appears on the $10 bill, issued in 2018.

And while the N.S. government issued a formal apology and pardon to Desmond in 2010, it never did repay the money for the original fine. It was only after Varishini Deochand, a Grade 11 student from Vaughan, Ont., wrote a letter to McNeill asking him to rescind the fine.

“While we may not be able to travel back in time to right our wrongs, we can show that we care in the most sincerest of ways,” said Deochand during yesterday’s ceremony. “I believe that one should not pay a fine for a crime they did not commit. That prompted me to write a letter to the premier of Nova Scotia, Stephen McNeil, about a symbolic repayment of the $26 fine.”

“We must continue to acknowledge and recognize the incredible people of African descent like Viola, who have made a significant contribution to our society,” McNeil said at while presenting the cheque to Desmond’s sister Wanda Robson. And he noted that the original cheque to pay for the fine will be on display at Nova Scotia legislature as well as Desmond’s pardon certificate.

Robson says she will donate the money for a scholarship at Cape Breton University, her alma mater.

Cicely Tyson: How the Award-winning Actress Used the Stage and Screen to Blaze a Trail for Black Entertainers