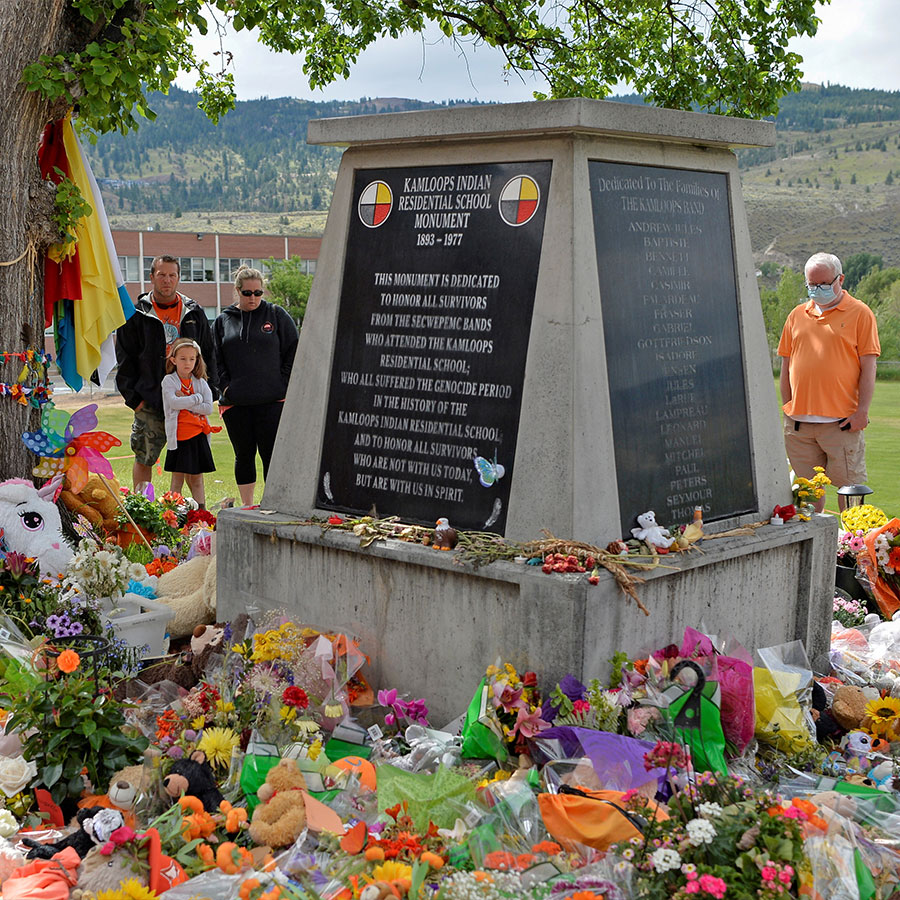 People visit a makeshift memorial on the grounds of the former Kamloops Indian Residential School, after the Tk'emlups te Secwepemc band council encouraged mourners to take part in a national day of prayer to honour the remains of 215 children that were found at the site in Kamloops, British Columbia, June 6, 2021. Photo: Jennifer Gauthier/Reuters

A second discovery this week of hundreds of unmarked graves at the site of a former Canadian residential school is giving fresh impetus to nationwide searches for more remains by indigenous groups, complicated by land rights restrictions, incomplete records and disagreements over how to honor the dead.

For 165 years and as recently as 1996, Canada’s residential schools forcibly separated indigenous children from their families, subjecting them to malnourishment and physical and sexual abuse in what the Truth and Reconciliation Commission called “cultural genocide” in 2015.

The two discoveries are prompting indigenous communities to look for more buried children across Canada, a task not without hurdles. In some cases, private land ownership precludes searches. Some communities are still waiting for church groups to give them records that would let them identify remains. Some relatives want disinterment while others do not.

The residential schools caused harms that reverberate among survivors and their families and in ongoing government practices, such as a foster care system that disproportionately separates indigenous children from their families, often due to underfunded services in their home communities.

Finding these remains can give families a sense of closure.

‘They Were Planning For Death’

Jennifer Rattray knows where her great-aunt Olivia and great-uncle David are buried. They are believed to have been 13 and 7 years old when they died at Brandon Residential School in Manitoba.

They are in unmarked graves below a campsite, Rattray said, one of multiple Brandon sites holding the remains of what could be more than 100 children who died at the school.

Rattray wants the city to buy back the property and protect the site so that “vacationing families are not camping on the graves of my ancestors.”

She said she is also leery of researchers’ efforts to perform DNA testing on the remains as some families may not want that.

Eldon Yellowhorn, founding chair of Indigenous Studies at Simon Fraser University and who is involved with the Brandon Residential School search, said while some families may want an on-site commemoration, “you also have to look into repatriation, and the only way to do that is exhuming and identifying through DNA.”

Yellowhorn remembers looking at architectural drawings for residential schools and seeing space set aside for cemeteries.

“They were planning for death.”

The Kamloops discovery has sparked a wave of funding commitments from multiple provinces to assist the searches. The federal government vowed to expedite the release of C$27 million ($22 million) promised in 2019.

For Muskowekwan First Nation in Saskatchewan, the bones started turning up in 1993, when the First Nation tried to replace water lines for homes behind the residential school, said councillor Cynthia Desjarlais.

They did not have the resources to do a proper search of the area until 2018, when a ground sonar search in partnership with two universities detected 35 graves, she said. “Now we need to do the other areas, because we expect there’s a lot more.”

Tony Brunette, whose Winnipeg-based business Structure Scan specializes in ground-penetrating radar work, said he has been inundated with calls inquiring about unmarked graves.

“There’s a lot of families that are reaching out and they’re wondering where their loved ones are,” said Chief Dennis Meeches.

And the 1,200-person Tseshaht community, on Vancouver Island near Canada’s western edge, wants to investigate the site of the Alberni Residential School on its land.

Every day, Tseshaht elected chief councillor Ken Watts gets calls from residential school survivors about where children went missing, where they might be. Their proposal for government funding is just about ready, Watts said.

“It’s heavy work, to be honest. It’s not easy to hear,” he said. “This isn’t just about hiring some company to run a machine over territory. There’s ceremonies that we believe need to take place. We have cultural protocols.”