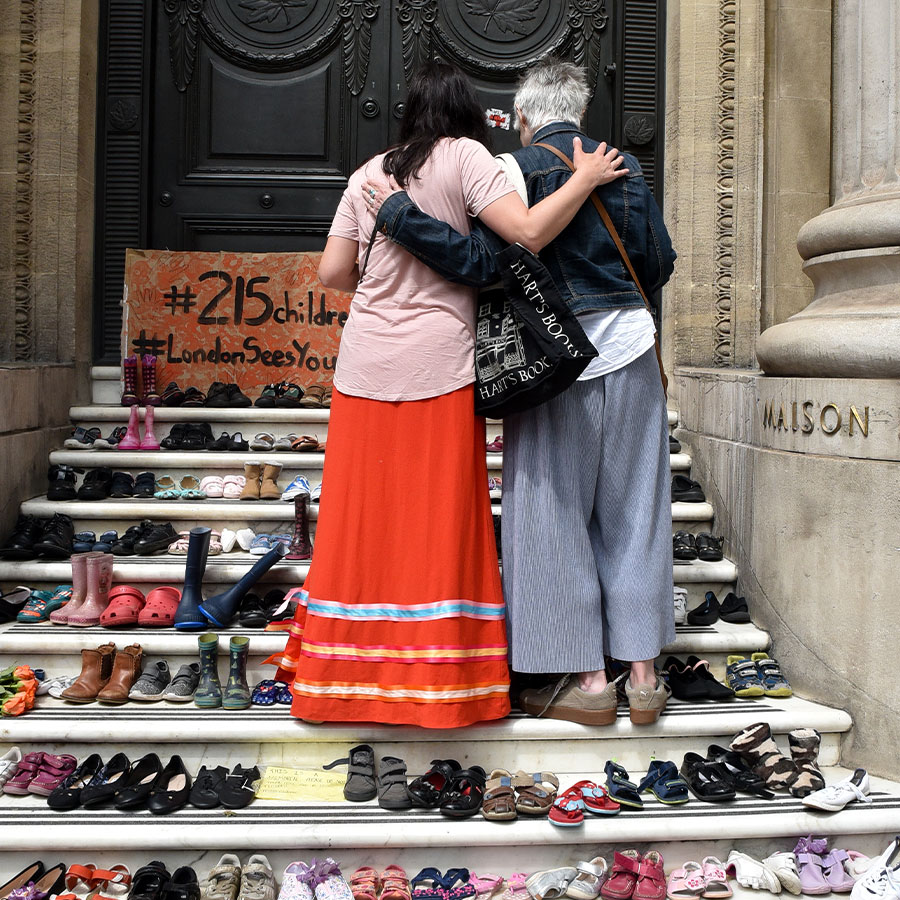 Editor’s Note: This story was written prior to the discovery of 182 sets of remains at a former in Cranbrook, B.C., residential school site on Wednesday.

Prime Minister Justin Trudeau says he’s “appalled by the shameful policy that stole Indigenous children from their communities.” And Indigenous Services Minister Marc Miller characterizes it as “shameful” that the Pope has declined to apologize for the Catholic Church’s role in running the schools on Canada’s behalf.

Mostly, shame is the kind of bad feeling we are encouraged to reject, because it’s been forced upon us about things that there’s no inherent shame in — our bodies, our faith traditions, our sexuality. However, there is a place for naming the feeling of being implicated in collective wrongdoing as “shame.” Scholars make a distinction between guilt and shame. Guilt is when I recognize that I have done something wrong. If I’ve hurt someone, or broken something through carelessness, I might feel guilt. Shame is a feeling of being wrong, or bad. It is sticky, and it attaches to our sense of self rather than our actions.

My research has shown that many white people started what became valuable contributions to collective anti-racist transformations when they felt shame about benefiting from racism or racist structures. Recognizing and naming the shame pertaining to Indian Residential Schools can be an important starting place. But what comes next?

Many suggest that settlers educate themselves. They can read the reports of the Truth and Reconciliation Commission (TRC), follow investigative initiatives, watch films and read books from the viewpoint of survivors.

A next step is to demand accountability from the Canadian government by writing to elected representatives and lobbying for legislative change. And non-Indigenous people can donate money to support survivors or reparation work.

White settlers in particular may have a tendency to focus too much on themselves when confronted with racism and colonialism in terms of their self-education and political self-expression. The feeling of shame tends to turn people inwards, yet we’re all connected in some way to Canada’s genocidal past.

White people can participate in collective work by standing with Indigenous Peoples. After listening and advocating, we can respond to the TRC’s Calls to Action.

Non-Indigenous people who aren’t white might also find some traction in these approaches, but since racialized people have been and are themselves targeted by both the Canadian state and white racists, their collective work will be different.

Often instances of shame, such as an implication in genocide, are points of connection in our lives. They might show us things we are genuinely moved to work on.

If someone is deeply committed to their church community, for example, and discovers that it was directly involved in residential schools, educating their congregation and initiating its responses to the TRC Calls to Action might be a natural next step.

A person who cares about the environment might turn towards supporting Indigenous land defenders in places they care about, here and abroad. Someone who cares about teaching and education can support school-centred actions.

Past Efforts to Show Solidarity

Non-Indigenous people have been involved in solidarity work for many years in ways that might be instructive for responding to the legacies of Indian Residential Schools.

In the 1990s, there were examples like Settlers in Solidarity with Indigenous Sovereignty, Anti-Racist Action members in Toronto who fought against white supremacist fishing and hunting groups and Reaction SIDA members who supported the Kanienʼkehá꞉ka people as they defended their land from development during the Oka Crisis at Kanehsatà:ke.

Today, we see some settlers protesting alongside Wet’suwet’en, Secwepemc and Pacheedaht, Ditidaht and Huu-ay-aht First Nations in their efforts to defend their land against logging, chemical spills from mining slag and the effects of petroleum pipelines.

Showing solidarity and getting involved are connected to the work of actively responding to the TRC Calls to Action.

The most effective non-Indigenous participants in this kind of work resist the impulse to act like individual heroes, martyrs or “white saviours.” They support and stand by Indigenous people instead of making it about themselves.

For people getting involved in ongoing projects — of which there are many — key starting points include listening more than talking, not trying to introduce big new ideas, taking up the non-glamorous work and not speaking for others.

People who don’t burn out by trying to do everything, who are in it for the long haul and who help build useful collective organizations — those who other people can count on for years of support and collaboration — turn out to be the most effective contributors to social transformation at the scale needed for addressing Canada’s treatment of Indigenous people.

Alexis Shotwell is a Professor in the Department of Sociology & Anthropology at Carleton University.