With Donald Trump (and Javanka) Leaving the White House Under a Cloud, Can the Brand Name Rise Again? 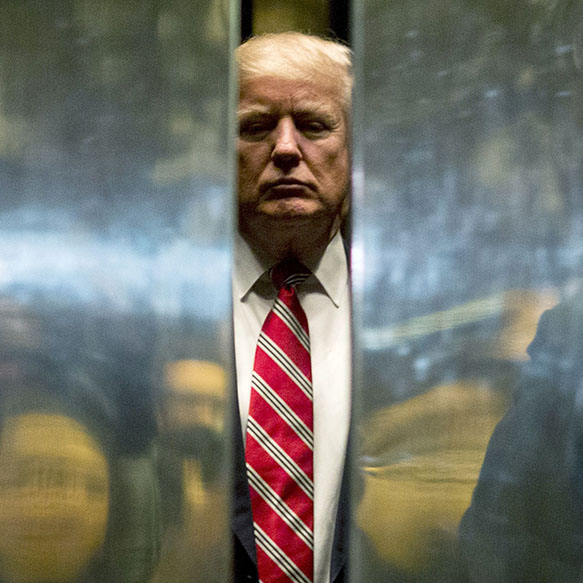 “Let it be known to the business world: Hire any of Trump’s fellow fabulists and Forbes will assume that everything your company talks about is a lie,” read a blistering online op-ed that the magazine published a day after the Capitol riot — a date forever scorched on America’s psyche. “Want to ensure that the world’s biggest business media brand approaches you as a funnel of disinformation? Then hire away.”

Not that anyone was looking to employ former Trump administration staffers by the president’s final month in office. One HR recruiter lamented to Business Insider that he couldn’t even land interviews for the half dozen he’d taken on as clients. Months of refusing to concede the election, capped by inciting a murderous insurrection, association with the pilloried, now twice-impeached Trump, had vaporised the coveted corporate positions that traditionally awaited former White House staffers. “Morally, it’s hard for people to want to work with them,” added the recruiter. A media executive interviewed for the story bluntly concluded: “Few of them have real value beyond Fox News, One America News and Newsmax.”

“Their brand was certainly stained, and it’s a stain we’ll never be able to erase,” a top Republican strategist commented, also anonymously, to Politico.com, echoing the prevailing sentiment. The president was de-platformed by social media while a litany of major corporations issued public rebukes and ceased funding for GOP candidates who’d supported Trump’s election fraud hoax and refused to certify Biden’s win. Amex, AT&T, Coca-Cola, KPMG, Marriott, Morgan Stanley, Verizon, Walmart — the list went on and on, with Hallmark going so far as to demand that its donations be refunded.

Trump, meanwhile, also faces a landslide of costly legal woes once out of office — from tax fraud to possible treason — state charges that a self-pardon won’t protect him from as attorneys general, NY to DC, lined up to file lawsuits. Even Deutsche Bank, having earned the derisive epithet “Douche Bank” for its shady dealings with Trump, announced that it would no longer do business with the family. In more personal upsets, the PGA pulled its tournaments from Trump’s golf courses, and New England Patriots coach, Bill Belichick, an old friend, declined the honour of a Medal of Freedom. And in a final, ignoble slap, the Pentagon rejected the disgraced outgoing Commander-in-Chief’s demand for an extravagant, red-carpet military send-off.

It was a stunning dénouement for an American president, though not especially surprising for a scandal-a-week administration that half the population viewed as a crime spree in plain sight. That it would take five people dead in the Capitol — the cradle of American Democracy — for Trump’s greedy, craven enablers to be jolted into acknowledging the wreckage was perhaps the most appalling angle. Either way, it was widespread opprobrium that, for any other aspiring political dynasty, would be a descent too vertiginous to recover from.

But this is the Trumps, that glitzy gold-plated tribe for whom detachment from reality is an inherited trait — and secret weapon. If anyone excels at manufacturing a narrative — however false — it’s this clan who, having had a taste of real world stage power, are not likely to give it up to return to mere reality television, suspected money laundering and mid-range fashion lines. Quick studies when it comes to the grift, they’ve learned that swindling hundreds of millions out of brainwashed followers is far more lucrative than licensing their brand, launching phony universities and fleecing charitable foundations.

True to form, the ex-president is already onto his next brazen con. Hot off his successful “election fraud” scam, Trump is jacking the stakes, scheming to raise two billion in “small-dollar donations” from his zealous flock to “fund” his Trump Presidential Library. Slated for Florida, this oxymoronic fantasy should be interesting to construct. Given that such institutions include everything written about a president — good and bad — one assumes that the overflowing latter wing will simply be excised from the plans and replaced with the MAGA-world version of events right down to the “stolen” election. Speaking of theft, by way of comparison, the George W. Bush Presidential Library cost $300M and Obama’s soon-to-be-completed edifice is estimated at $500M. As one Twitter wag put it: “Trump’s $2B Presidential Library itemized: $500K for library, $1,999,5B for his debts”.

Whatever it costs, it will be a brick-and-mortar monolith to the One Truth of the cult-realm in which the Trumps exist: that they invent the storyline and their acolytes believe it. So, while CNN’s White House correspondent Kate Bennett reported that Ivanka was in a “bit of a panic,” post-siege, troubled that her father’s deadly assault on democracy might hamper her own political ambitions, Steve Bannon, Trump’s one-time campaign adviser, was hyping the soon to be former First Daughter on his podcast as “the second most fire-breathing populist in the White House.” A designation that surely appeals to the 80 per cent of Republicans who, even after the Capitol revolt, still approve of her father’s tenure.

With numbers like that, Ivanka won’t be forced to take her eye off the ball. Specifically, establishing residency in Florida — the family’s adopted HQ now that they’ve been run out of Manhattan — where she and Jared have purchased a $30M waterfront property. A perch in the beating heart of Trumplandia from which Ivanka can focus on a potential Phase 1 — ousting Marco Rubio from his Senate seat, a primary many believe she can win, in a deep red Republican state where she’ll likely vanquish her ensuing Democrat opponent.

The family’s political objectives — White House 2.0 —resting squarely on the buff shoulders of Daddy’s Favourite Child, the influence, rallies, idolatry and access has also beguiled the rest of the kids. While Ivanka calibrates her image — Palatable Populist! Nicer Nationalist! Fashionable Fascist! — aiming for victory with a more sophisticated version of Trumpism than her boorish father could muster, her brother, Don Jr., undaunted by the stench of dishonour, is angling to run the Republic National Committee — or the National Rifle Association! — if he’s not thrown in jail for helping to incite sedition. Though Eric Trump exhibits little drive beyond running the family’s maligned wine business (“Welch’s Grape Jelly with Alcohol,” sniffed Vanity Fair), his wife, Lara, has set her raptor sights on a congressional run in North Carolina, her home state.

Even Tiffany could come in handy. A 2020 Georgetown University law graduate, Trump’s fourth child is now in a position to act as legal counsel for a family no respectable firm will represent. Staff at white shoe law firms responding to the prospect of working with the Trumps by threatening mass resignation, Tiffany could also solve the problem of no one wanting to hire her by accepting the role of in-house family counsel. Her father tweeted upon her commencement: “Great student, great school. Just what I need is a lawyer in the family.”

The idea that one, never mind three, next-generation Trumps would regard their path to power and politics as essentially unimpeded would’ve been dismissed as absurd as recently as Jan. 7. But viewed through their signature parallel reality prism, where they craft the most advantageous truths for themselves, buoyed by throngs of admirers, it makes perfect sense. Their conviction confirmed by Trump’s flabbergasting, post-rampage poll numbers. Revealing that Trump, in numerous polls, was maintaining numbers not far off the average 41 per cent approval rating he’d charted across his term. An ABC News-Washington Post poll pegging it at 38 per cent while FiveThirtyEight scored him at 38.3 per cent. An NBC News poll found that 43 per cent of voters nationwide gave Trump a positive job rating, though, admittedly, Gallup posted a more dejected 34 per cent. In any case, such calculations were handily buttressed by 78 per cent of Republicans rejecting the idea that Biden had been legitimately elected.

Sure, the Trumps will be shunned by the “liberal elite,” establishment Republicans, rational independents; anyone gay, black, sane, decent or in possession of a liberal arts degree. But as long as they’re not prosecuted for anything, what obstructs them? Even if everyone else is disgusted by them, even if their father is banned from public office, even if they’ve ushered in an age of alt-right domestic terrorism and boast a COVID death rate of 400,000 and counting, they’ll fuel themselves on MAGA worship, disregard the rest of the country and decry any opposition or criticism as a hoax, fake news or just another witch hunt. That’s who they are.

Nonetheless, Trump’s legion of detractors can sooth their contempt in that, inevitably, the record will not view Trump or his avaricious children kindly. “He’s in a really bad place in terms of his legacy and how history will remember him, and I don’t think he has very many tools at his disposal to change that narrative,” said Matt Dallek, a political historian and professor at George Washington University, to online conservative magazine The Hill.

“Donald Trump is a man who ran for office to make his brand great, not to make our country great,” former Trump attorney Michael Cohen testified to the House Oversight and Reform Committee before being sentenced to three years in prison for various criminal charges including breaking campaign finance laws for reportedly paying off porn star Stormy Daniels to prevent her from publicly disclosing a 2006 affair with Trump. One of seven individuals from the president’s inner circle to be charged with felonies related to the 2016 campaign or adjacent skullduggery, Cohen added, “Mr. Trump would often say this campaign was going to be the ‘greatest infomercial in political history.’”

A statement that, despite everything, may still prove correct. As The Donald once crowed to the press: “I could stand in the middle of Fifth Avenue and shoot somebody, and I wouldn’t lose any voters.” While it turned out to be five people in D.C., instead of one in New York — and he didn’t shoot them but rather helped incite the mob that led to their deaths — it’s a point that no longer stands as a metaphor. Trump maintaining his cult leader stranglehold on the GOP, even post-siege, no matter how derided he is in wider circles. Controlling 80 per cent of the GOP vote, which equates to 30 per cent of the national ballot, it’s a chalice he’ll hand his offspring who know they only have to win over one side of the fence, slyly fostering MAGA support. They know that so long as they control the plot — masters of a surrealist, post-truth culture — that crowd will follow them anywhere.

To paraphrase a Russian axiom on authoritarianism: “If nothing is true, everything is possible.”