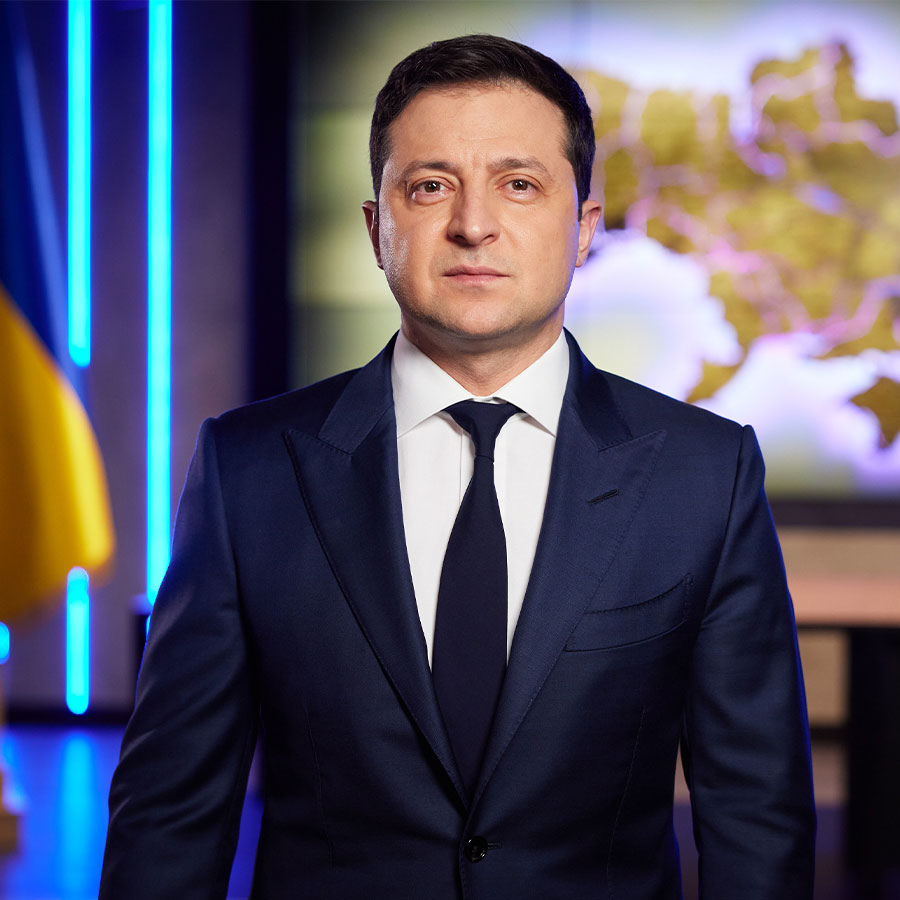 Inspired by their unlikely leader, the incredible valour and wily resourcefulness of the Ukrainian people has inspired a world that’s lacked heroes for far too long. Jolting people out of their pandemic and political ennui and leaving everyone astonished by their courage — and swagger.

In a geopolitical shift that can only be described as tectonic, President Volodymyr Zelensky has stunned everyone by inspiring his nation — and the entire global community — to throw their unwavering support behind the battle against Russia and its president, Vladimir Putin.

Charismatic loadstar of a David vs. Goliath fight, Ukraine’s valiant leader has been swiftly elevated to Churchillian status. The man has inspired civilians to join the fight — including foreigners who answered his call to enlist in a newly formed International Legion. And he’s somehow compelled Switzerland — a country so steadfastly “neutral” that it refused to reprove even the Nazis — to join the blanket backlash against Russia’s aggression.

Social media is awash in astonished memes — “Things On Earth You Can See From Space,” read one, giving the answers as: “The Great Pyramids of Giza, The Amazon River, The Grand Canyon, The Balls of Volodymyr Zelensky”— and global pundits have become like school kids gushing over their favourite superhero.

“It’s not the size of the dog in the fight, but the size of the fight in the dog,” international affairs and intelligence expert, Malcolm Nance, remarked admiringly on MSNBC. Media outlets from the CBC to The National Review are crowning him as a new “war hero”; even Tatler is tossing laurels at Zelensky’s “bravery, a steely calm and resolve.” People in Tel Aviv were chanting his name at Ukraine rallies reported the Times of Israel.

From Actor to Hero

What’s really surprising is that as recently as 2017, two years before he was elected, Zelensky’s big gig was dubbing the animated bear in the Ukrainian language versions of the Paddington movies. A locally famous comedian with a string of popular rom-coms on his resumé, the diminutive actor had also won the national edition of Dancing with the Stars.

In another surreal twist, Zelensky produced and starred in Servant of the People, a Ukrainian comedy series about an ordinary man who is elected president of Ukraine after a clip of him railing against political corruption goes viral and becomes an adored leader that, per IMDB, “works very hard to build a new country and fight the army of corrupt and deceitful bureaucrats.”

The series, which the U.K.’s Channel Four bought the rights to today, ran for three seasons (2015 to 2019), spun off a 2016 feature film, and saw Zelensky launch a grassroots political party, also called Servant of the People.

Elected president in 2019 with an overwhelming majority, it’s a trajectory (minus the “overwhelming majority”) that mirrors his nemesis, Donald Trump’s rise to high office on the success of an image projected by a television show. Only in Zelensky’s case, the media doppelgänger and the man were one in the same and his show must have been excellent practice for his introduction to the office, where his first term kicked off with rejecting the venal inveigling that earned Trump his first impeachment.

The first glimmer of Zelensky’s admirable mettle, no one would have forecast that by 2022, he’d be shooting down President Biden’s offer of wartime evacuation with Clint Eastwood cool — “I need ammunition, not a ride” is a one-liner that will go down in the annals of history.

The right man for the times, it’s precisely that mix of grit and wit that’s drawn support from every corner; Ukrainians at home and abroad finding endlessly original ways to pitch in, often with a unique brand of scathing humour.

In Lviv, the Pravda Brewery pivoted from beer to bomb making, producing Molotov cocktails on the factory assembly line. Conveniently, employees already had perfectly labelled bottles for the endeavour — Pravda’s Putin Huilo (“Putin is a Dickhead”) ale among the brand’s more popular offerings.

As far away as Mallorca, Spain, Ukrainian engineer Taras Ostapchuk was arrested for attempting to sink the luxury yacht owned by his boss — Russian arms dealer Alexander Mikheev. Released from jail, Ostapchuk informed the media he’d do it again, given the chance, and was leaving to defend his homeland.

Miss Ukraine 2015, Anastasiia Lenna, released a series of Instagram posts featuring herself equipped with airsoft rifles, encouraging one and all to come fight for her country. “Anyone who wants to join the defence … she implored her 263K (and counting …) followers. “The world can come and stand side-by-side with Ukrainians against the invaders. Ask your embassy!”

Next door in Russia, Nastya Tuman, a well-manicured influencer known for her mechanic skills, posted a handy TikTok video demonstrating how to swipe a tank for her Ukrainian neighbours: “If you happen to find an abandoned armored personnel carrier, here’s a life-hack on how to start it.”

Echoing the soldiers of Snake Island who valiantly told a Russian war ship to “Go F**k Yourself,” Ukravtodor, the State Agency of Automobile Roads of Ukraine, urged citizens to change road signs to confuse Russian troops by posting a digitally altered image of a highway sign that offered three new directions: “Go F**k Yourself, Go F**k Yourself Again, and Go F**k Yourself Back in Russia.”

Badly outgunned by a despotic Putin, who seeks to win at any cost, whether Ukrainians can actually triumph in this herculean Good vs. Evil battle is anyone’s guess. Two things are certain though: They’ve shown the world what real heroism looks like and Putin’s in for a very rough ride if he does take the country.

Who’d want the job as leader of Putin’s puppet government? It would likely be a very short term.