Going to Pieces: Puzzles and the Brain 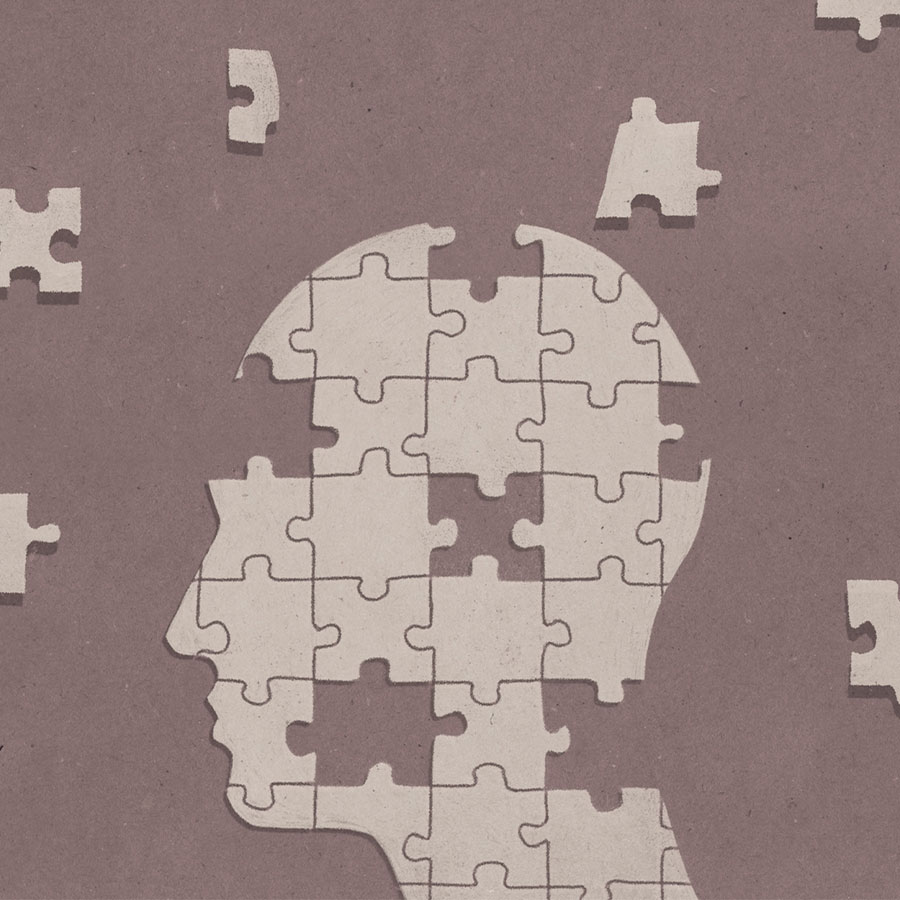 While puzzles may be a metaphor for life, solving them might also benefit our brain health. Illustration: Valeriya Simantovskaya/Stocksy

On a cold winter evening not long ago, I found myself searching for a piece of a naked demon, but no one had seen it. “I’m putting together the trumpet monster,” my daughter said. My son was working on the Garden of Eden. Our heads were bent together over the dining room table as we worked on a jigsaw puzzle, shutting out the misery of the pandemic outside.

Once assembled, our 1,000-piece puzzle would depict 15th-century Dutch artist Hieronymus Bosch’s triptych The Garden of Earthly Delights, famous for its graphic and bizarre representations of the Christian afterlife, with sinners writhing in hell and the saved bound for heaven. I suppose we could have chosen something more cheerful, but this one suited the mood of the times. I mean, there’s a dude with a flute sticking out of his bottom, and another being eaten by a giant bird. I looked at that puzzle and thought: Yep, things could be worse.

We were, of course, not the only family gathered over a jigsaw as a distraction from plague. During the pandemic, I joined the hordes of people who found comfort in that relic of childhood. Manufacturers saw their sales rise by up to 370 per cent. Prices of puzzles rose, if you could even find them; jigsaws became as scarce as monogamy on Love Island.

The steadily growing global puzzle industry is worth an estimated US$718 million in 2022, and is expected to grow by US$67 million in the next six years. This is one pandemic trend that isn’t going to die, because jigsaws are that rare animal, both fun and good for you. There is no barrier to entry, little skill is required, and they give you great insight into your partner’s character: Do they methodically find all corners before starting, or are they anarchists who dive in with no regard to colour or pattern? Solving puzzles together fills a basic human need for connection. You can do them alone, but as with sex, it’s just not as much fun.

At one point during the pandemic, Anna Douglas just couldn’t look at another screen. The Toronto-based actress bought a puzzle – glittering flowers and unicorns, no demons – and she and her partner worked on it over a glass of wine. “It was so nice, so satisfying,” Douglas says. “It was slow, cathartic, a little bit anti-capitalist. It felt like the antithesis to everything we do in life.”

When Douglas went to buy more puzzles, they’d shot up in price – if she could find them at all. So she founded the Toronto Puzzle Exchange on Facebook, which now has 825 members. People meet up and swap their 1,000-piece Ravensburger landscapes and their 500-piece Cobble Hill pastorals. “It’s such a joyful thing,” Douglas says. “And how many things exist that are just pure, pure joy these days?”

Karine Déry is also a “puzzle fanatic” who was searching for a connection – in her case, to other jigsaw fans. Déry, a Canadian who moved with her family to Malta during the pandemic, wanted to find a conference where she could meet other people who loved jigsaws. She searched online and found nothing. So she and her husband, Alexandre Ouaknine, decided they would supply the missing piece, and create the world’s first dedicated jigsaw puzzle convention.

“I wanted the convention to show that puzzles are great for people from all walks of life and all ages,” she says. “They help in many different ways, whether you’re five years old or 95 years old or anywhere in between.”

After they’d secured some unusual funding (the equivalent of $260,000 from Shark Tank Malta), the Jigsaw Puzzle International Convention was held over three days in Las Vegas in July 2022. A team of “expert puzzlers” spent the whole time trying to put together the world’s largest commercially sold puzzle, Grafika’s 54,000-piece Travel Around Art (they finished just over half of it). Around 2,000 people visited, a number Déry hopes will increase next year when the convention moves to Germany, home of the famed Ravensburger puzzle company.

Like all puzzlers, Déry sees a metaphor in the madness: For her, it’s about setting boundaries – the frame of the puzzle – and conquering a challenge by breaking it down into discrete parts. For Douglas, the metaphor is one of calm resistance, defying the constant productivity that an exploitative economic system demands. For me, the puzzle represents an acceptance of the messiness of life. Sometimes a piece is missing. Sometimes you just have to give up. Sometimes the demon wins.

Before they were a metaphor, though, puzzles were an educational tool. In the late 18th century, a cartographer and engraver named John Spilsbury carved some wooden blocks in the shape of countries, so that upper-class British children could learn what parts of the world they should rule. The hand-carved wood gave way to die-cut cardboard, and subject matter is now limited only to one’s imagination. There are Braille puzzles and 3D puzzles and puzzles where no image is provided for the solver. (I gave one of these to my sister-in-law, and she still hasn’t forgiven me.)

For many years, jigsaws were the playthings of the idle rich, and  “extremely popular among high society as a must-have at vacation homes and house parties,” according to a Geneva Historical Society of New York blog post. But then the Depression arrived, and puzzles became cheaper once they were printed on cardboard. For millions, puzzles printed with nostalgic pictures of landscapes and flowers (or advertisements) became a distraction from the horrors of the world. Sounds a bit familiar, no?

Jigsaw puzzles appear in Jane Austen’s Mansfield Park, as a measure of one character’s dimness, and in the film The Queen, as a measure of how much the Queen was just like us. They appear in the paintings of Goya and the songs of the Rolling Stones. To the 18th-century poet William Cowper, they were “a heap of confusion,” but to British novelist Margaret Drabble, they represent a relief from the chaotic boundlessness of fiction writing. As she writes in her book The Pattern in the Carpet, a jigsaw “can’t be done badly. Slowly, but not badly. All one needs is patience.”

Puzzles are useful for calming our frayed nerves, and even for building connections with monosyllabic teenagers. But are they also good for our brains? Stacy Costa, a PhD candidate at the Ontario Institute for Studies in Education, who also creates and gives lectures about puzzles, says that they are. For one thing, they help strengthen spatial reasoning and short-term memory, and may protect the brain from harmful effects of aging. The key, she says, is to build up what’s called a “cognitive reserve” as early as possible. “It’s great to start at 60,” she says, “but if you can start at 40 or 50, and do it over the long term, then those benefits are going to be even greater.”

But, Costa adds, research also shows that the benefit is greatest when people challenge themselves by stretching their puzzling muscles: a Wordle fan should also try Sudoku, and a jigsaw person should match wits with crosswords. “If you want to keep your brain functioning at its best, you really have to go into those other genres.”

I’ll admit I don’t think about my brain health when I’m doing a puzzle. Instead, I’m just glad that my children are still speaking to me (if only to say, “that doesn’t go there”). I’m happy to be creating something that has no real purpose beyond a fleeting moment of happiness and satisfaction.

Not that things always wrap up so neatly; like life, the best-laid puzzles often go awry. With 999 pieces placed in The Garden of Earthly Delights, devils and angels all properly sorted, we realized we were one piece short. We looked everywhere, including in the cat’s litter box. No luck. Maybe satanic forces were at work. Or maybe we were looking at another metaphor: Even when things don’t work out perfectly, there is still joy in doing them.

A version this article appeared in the December 2022/January 2023 issue with the headline ‘Going to Pieces’, p. 66.