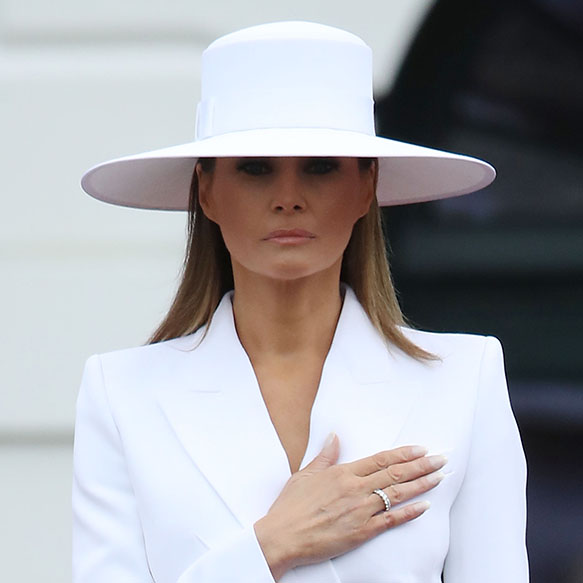 The only First Lady to inject Bond Villainess flair into her White House wardrobe, Melania Trump will be remembered for her ultra-literal reading of the fashion moment. Photo: Mark Wilson/Getty Images

The only first lady to inject Bond Villainess flair into her White House wardrobe, introducing leather trench coats and every-day five-inch Louboutins to the gig, Melania Trump will also be remembered for her ultra-literal reading of the fashion moment. Like a parallel-universe Kate Middleton pinning on a shamrock fascinator for St. Patrick’s Day, Melania Trump’s affinity for outfits echoing the occasion would see her choose a bright pink pussy-bow blouse for the second Donald Trump-Hillary Clinton debate, a week after her husband’s “grab ’em by the p****y’” hot mic gaffe. Not to mention touring the pyramids dressed like an extra from Raiders of the Lost Ark, going on a safari in Kenya sporting a pith helmet that drew scorn for her oblivious embrace of a colonial relic as mere “stylish” accessory or her turn as a model of Dictatorship Chic by McQueen for President Trump’s Peron-style Republican National Convention at the White House during the run up to the 2020 election.

The third Mrs. Trump’s sartorial forays occasionally drifting into costumery, she was also the first first lady to abandon the unspoken “American designers only” path charted by her predecessors. More likely to wear the labels of a country she was visiting — Dior in France, Dolce for the Pope — than to promote those of the nation she represented, Melania came wrapped in an international roster of haute brands at home and abroad. A handful of American brands — Lauren, Kors, Proenza Schouler, Max Mara — peppered the bodycon cavalcade of Gucci, Pucci, Burberry, Prada, Celine, Bottega Veneta, Valentino, Elie Saab, Erdem, and Mouret.

Greeting the Czech Republic prime minister in an inarguably cool leather Alexa Chung trench, touring an Iraqi air base in Victoria Beckham, donning a printed Azzedine Alaia dress for Easter mass, issuing her first UN speech — a tone-deaf address heralding her anti-bullying campaign — in a bold Delpozo frock, Melania was, nonetheless, disdained as the consort of a venal autocrat and rebuffed by the fashion industry.

Still, with her penchant for Kelly bags, vertiginous heels, a cinched trench, classic plaids, bowed silk blouses, knee-high boots, safari dresses, pencil skirts, cashmere turtlenecks, skinny jeans, wow eveningwear, and snakeskin stilettos, Melania was one of America’s most stylish first ladies. Surpassed only by Jackie O, her rivals down to Nancy Reagan and Michelle Obama, Melania earned the remarkable distinction of being the only FLOTUS in history — a former model no less — to be denied a single magazine cover during her tenure. Her predecessor, Michelle Obama, graced a dozen across her eight years in the White House, including a trio of Vogues, a publication with a century-long history of featuring first ladies upon their White House debut.

“[Vogue] has always photographed the first ladies when they first came into office. Extraordinary, wonderful women, it was an honour,” said editor-in-chief Anna Wintour in a 2019 interview with CNN. Lauding the “wonders” that an “inspiring” Michelle “did for fashion,” she put the Melania boycott down to Conde Nast “taking a stand” on politics. “It’s important to have a point of view. We profile women we believe in.”

Whatever, retorted the East Wing Communications Director, waving off the diss: “Her role as first lady and all that she does is much more important than some superficial photo shoot,” adding that Mrs. Trump was, at the moment, busy cheering troops at Fort Bragg (in military-inspired Alexa Chung jacket and python Manolos) and likely relieved that her boss wasn’t, that day, jetting to the border to comfort imprisoned immigrant toddlers in a Zara coat emblazoned with the statement: “I REALLY DON’T CARE, DO U?”

A Givenchy cape here, a Roksanda frock there, if designers hadn’t been recoiling from what she represented — racism, cruelty, child cages, the violent overthrow of democracy — they’d have been clawing each other’s eyes out to dress her, unleashing a flood of PR whenever Melania appeared in their clothes. Instead, researching this story, it was sometimes hard to confirm what designer she was wearing in a particular photo — the lone first lady whose fashion coat tails labels had zero interest in riding.

A woman so oblivious, she’d tout her White House platform as an endeavour that “encouraged acts of kindness,” “helped children overcome everyday struggles” and combatted “cyberbullying” while representing an administration notorious for toxic tweets, racist rhetoric, and family separation. “Be Best” underscoring a chasmic inability to grasp reality or irony, the manifesto was greeted with a mordant eye-roll.

Taking it on with the gusto of a child forced to finish their vegetables, Melania was plainly more interested in event planning — if not holiday decorating, or as she put it, “Who gives a f**k about the Christmas stuff?” — and decor. Sprucing up the White House, her office released a heaving 241-page dossier on the first lady’s plans to update the place. Replacing wall fabric, restoring floors and furnishings, renovating the bowling alley and the president’s elevator, Melania blew off comparisons to Maria Antoinette as she unveiled a grand, limestone tennis pavilion during a national pandemic.

Planning to anthologize her efforts in a glossy coffee-table book, the first lady blithely carried on with a Jan. 6 photoshoot while the deadly Capitol riot raged on for hours less than two miles away, ignoring staffers who implored her to persuade the president to denounce the violence. “She said nothing,” reported one dumbfounded aide, describing how, instead, she “calmly arranged porcelain figurines for the photographer.”

Breaking her silence five days later in a statement riddled with spelling and grammatical errors, Melania condemned the attack, noted the dead and swiftly turned to her own grievances — slamming the “salacious gossip, unwarranted personal attacks, and false misleading accusations on me” in reference to criticism of her afternoon siege interiors shoot.

A final tone-deaf salvo, followed by her refusal to welcome the incoming first lady, Jill Biden, for the customary White House tea and tour. A move made even more gauche in that the century’s-old tradition had been extended to her by a gracious Michelle Obama, despite years of racist birther attacks against President Barack Obama by the Trumps in order to build up their political capital. Not that the Bidens care — they already know their way around the White House and, like the majority of Americans, they’re just relieved that the Trumps have been evicted. Their daughter, Ashley, dismissed Melania’s petty snub as “unfortunate” but one “we’re all okay with.”

Departing with a 47 per cent approval rating, compared with her predecessor’s 69 per cent, FLOTUS 45 will go down as America’s least popular first lady. A reputation that can’t be papered over with fancy wall coverings and Hermes handbags, Melania Trump will be remembered not for her notable fashion coups and decorative achievements but for her detachment and shallowness.

Or as W Magazine put it, “the mean girl no one wants to sit with at lunch anymore.”

To mark her departure from the White House, click here or on the image at the top of the post, to see a gallery of FLOTUS 45’s more notable looks.

“Melania and Me”: A Post-Mortem of a Friendship

With Donald Trump On His Way Out of the White House, Is the Trump Brand Truly Dead?