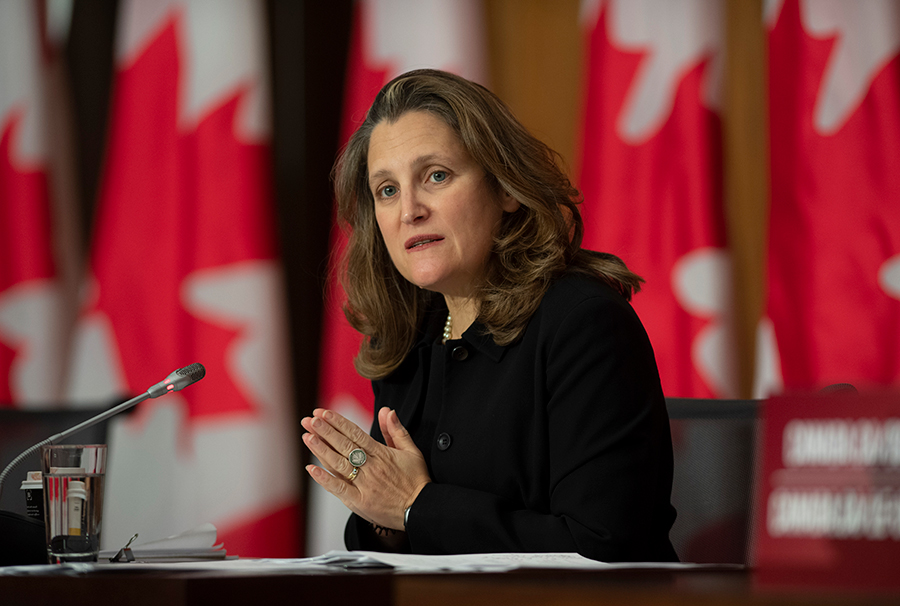 During a virtual speech this week, Deputy Prime Minister and Finance Minister Chrystia Freeland said her government would continue to do whatever it takes to "limit job losses and business closings, and minimize the decline in economic activity." Photo: The Canadian Press/Adrian Wyld

Our government has a moral and economic imperative to spend whatever it takes to “keep Canadians healthy, safe and solvent,” said Finance Minister Chrystia Freeland, in a revealing speech that set out to provide a rationale for the Liberal Party’s incredibly costly pandemic recovery plan.

In her Oct. 28 virtual speech to the Toronto Global Forum, before an audience composed of “senior decision-makers and actors of the global economy,” the deputy prime minister and finance minister attempted to defend her  government’s go-big-or-go-home recovery investment strategy, arguing that we really have no other choice.

Freeland was sending a message to Bay Street – and, indeed, all of Canada – that her government intends to put fiscal prudence aside for the time being in order to spend our way out of this pandemic-induced economic crisis.

Expanding on Prime Minister Justin Trudeau’s mantra that his government will do “whatever it takes” to preserve our health, jobs and standard of living, Freeland promised that the only way to make sure our economy survives this crisis, is to throw money at it, regardless of the amount.

“We can and will do everything in our power to limit job losses and business closings, and minimize the decline in economic activity,” she said. “As we beat down this virus, we will need to provide meaningful investment to build our way out of the coronavirus recession, and to ensure our economy comes roaring back, stronger than before.”

Spending Big Is Necessary “Fighting the coronavirus isn’t cheap,” said Freeland, in what might qualify as the understatement of the pandemic.

Spending Big Is Smart “Providing support to those who need it … is the economically smart thing to do. Our economy will only be able to recover fully once we have defeated the virus,” said the finance minister.

Spending Big Is Fair “It is just not practically possible, never mind fair, to ask workers to stay home, or businesses to shut their doors, without providing the financial support they need to compensate for lost income,” argued Freeland. “For a government to abandon them at a time like this would be monstrous.”

Spending Big Is Prudent “Our policies … are driven just as powerfully by a prudent, dispassionate economic calculus,” she said. “Because the truth is that we are living through a particular moment in history when doing good – supporting each other through a hard time,  is exactly what is required to do well – keeping our economy strong.”

Spending Big Is Affordable “In 1995, Canada’s debt-servicing costs as a percentage of GDP were six per cent,” she pointed out. “Today, even after the unprecedented expense of battling the pandemic these past months, that figure is expected to be 0.9 per cent of GDP.

The finance minister’s speech was not only an opportunity to convincingly explain her party’s spending measures but also a chance to derail the opposition’s argument that the government’s pandemic response has been a classic case of irresponsible spending of taxpayer money delivered to Liberal causes and supporters.

“There is not an unlimited pot of ever-increasing deficit spending,” said Conservative leader Erin O’Toole said recently. “It seems like [the Liberals] have no concern about huge, huge deficits and the impact on our fiscal capacity in the future,” he continued. “And that should concern Canadians because it seems like they’re willing to bankrupt a nation.”

You don’t have to be a Conservative supporter to be shocked by the deluge of dollars that has flowed out of our coffers since the pandemic first struck. And it’s not unreasonable to worry about how we’re going to afford it – either we pay higher taxes now or we pass it down to future generations. (Interestingly, the finance minister didn’t once mention taxes in her speech.)

Older Canadians, whom Freeland describes as being “of a certain vintage,” remember well the recessions of the past that provoked similar spending frenzies. They also remember the high taxes and harsh program cutbacks that ensued after the recession had ended in order to balance the budget.

Many who hail from a more fiscally cautious generation are quite fearful that unchecked spending will bring about a return to these painful times. Will it mean cutbacks to health spending down the road? And what effect will it have on government benefit programs like OAS and GIS, programs that lower-income older Canadians depend on to simply get by.

We won’t know for many years down the road whether the Liberal spending strategy is the correct one or what long-term effect it will have on program spending.

But as long as the Liberal minority remain in charge of the purse strings, the money will keep flowing. And we’re going to have to learn to live with the Freeland doctrine: “Doing too little is more dangerous and potentially more costly than doing too much.”